We use cookies to provide you with a better experience. By continuing to browse the site you are agreeing to our use of cookies in accordance with our Privacy Policy.
×
Home » Optimization of EVM Performance in I/Q Modulators

Error vector magnitude (EVM) is a scalar measurement of digital modulation accuracy and an important figure of merit for any source of digital modulation. Achieving low EVM in the transmitter modulator is important because the EVM of a signal degrades through each component of the transmit/receive chain. The transmitter up-converter, filters, power amplifiers, the receiver – even the communications channel – all impair the signal.

Figure 1 The VSA compares a measured input signal to an ideally regenerated reference signal to determine the EVM.

No single industry standard exists for EVM measurement and calculation. Rather, individual systems (e.g., Bluetooth, 802.11, DVB, PHS) specify the measurement for that standard. However this approach creates uncertainties, such as how to normalize the EVM for each symbol and which parameters in the measurement to correct (e.g., frequency error, I/Q offset, quadrature phase error, gain imbalance). EVM measurements will vary when using vector signal analyzers (VSA) from different manufacturers – even different models from the same manufacturer. 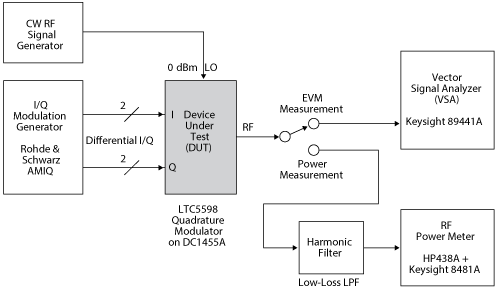 Using a VSA to measure modulation accuracy is illustrated in Figure 1. The VSA down-converts and digitizes the input signal at a given center frequency and bandwidth, with the modulation scheme, symbol rate, measurement filter and other signal parameters specified by the user. This data represents the measured signal, which the VSA digitally demodulates to recover the source digital data stream. Using the recovered source data, modulation scheme and other factors, the VSA mathematically generates the ideal reference signal. The VSA then calculates error vectors – the difference between the measured and reference data vectors normalized to the peak signal level. The root mean square (rms) and peak EVM scalar values are extracted from the error vectors. 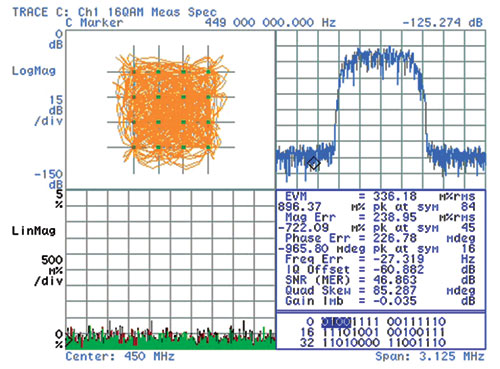 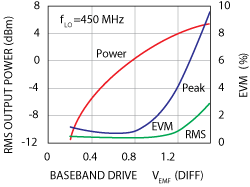 This article shows how a VSA characterizes the EVM performance of I/Q modulators, using Linear Technology’s LTC5598 as an example. This device is a direct quadrature modulator that covers 5 to 1600 MHz. 16-QAM is a relatively common type of digital modulation and a good vehicle to demonstrate the accuracy of the modulator. 16-QAM is the basis for many wireless systems, including LTE/LTE-Advanced, HSDPA, EDGE Evo, CDMA2000 EV-DO, Cognitive Radio IEEE 802.22 (TV white space), PHS and TETRA.1

The test setup for evaluating the I/Q modulator is shown in Figure 2 and the test conditions for each of the following measurements are summarized in Table 1. Mounted on a standard demonstration board, the typical EVM performance2 of the LTC5598 with a 450 MHz LO signal at 0 dBm drive is 0.34 percent rms and 0.9 percent peak (see Figure 3). The measured output power, following the harmonic filter, is 0.4 dBm. Using the same setup, a lab-grade signal generator with the same amplitude, frequency and digital modulation measures 0.28 percent rms and 0.8 percent peak. Comparing the results indicates that the modulation accuracy of the LTC5598 is nearly as good as the test equipment used to measure it.

EVM increases rapidly when the baseband input level drives the peak modulator into compression (see Figure 4). The maximum rms output power can be estimated as 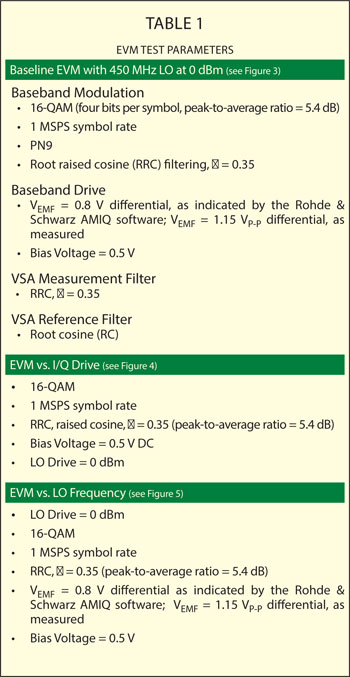 (Peaks will be at 1 dB compression)

With the output level at 1 dB compression, the EVM may be too high for the application, which will reduce the usable average output power available from the modulator. For systems that employ a modulation with higher peak-to-average ratio (crest factor), the usable output power will be further reduced.

EVM varies with LO frequency and, not surprisingly, is lowest at the middle of the band (see Figure 5). At LO frequencies below 30 MHz, EVM can be reduced by increasing the LO drive. At both band edges, the main contributor to the LTC5598 EVM is I/Q quadrature phase error (see Table 2). Some I/Q gain imbalance is also present, although it is not much of a contributor to overall EVM. Sideband suppression is the aggregate effect of both phase and gain imbalance.

Where necessary, these error terms can be corrected open loop in baseband or, in some transmit chains, as part of the power amplifier’s closed loop digital predistortion (DPD) system. While the subject of DPD correction is beyond the scope of this article, the DPD loop will have its own receiver that can measure transmit EVM and make adaptive corrections to the baseband waveforms to minimize error. DPD does not know or care where the error originates – the modulator, PA or both. 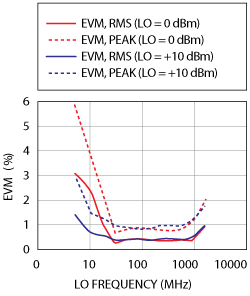 To obtain the best EVM performance from the I/Q modulator, the I/Q baseband should be “clean.” This means the I/Q digital-to-analog converter (DAC) clock should have low phase noise and jitter, the DAC reconstruction filter should not encroach on the baseband bandwidth and the baseband I/Q signal paths should have flat frequency response. The LO signal source should also be clean. LO phase noise adds random phase error that cannot be removed downstream, which increases the EVM. LO harmonics will cause quadrature phase error, so the choice of LO should adhere to the modulator data sheet recommendations.

Commercial I/Q modulators, such as the LTC5598, provide excellent digital modulation accuracy across the common VHF and UHF communications bands. The performance may be comparable to that of a lab-grade signal generator. If required, EVM can be improved through baseband correction of quadrature phase error or gain imbalance. 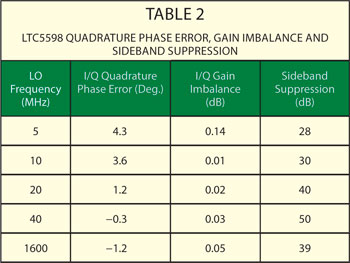 Peter Stroet received his M.S. degree in electrical engineering from the University of Twente, the Netherlands, in 1994 and subsequently completed a two-year design program at the same university. He joined Philips Semiconductors in 1997 as a design engineer for wireless ASICs. Since 2001 he has been with Linear Technology designing ICs for RF applications.