We use cookies to provide you with a better experience. By continuing to browse the site you are agreeing to our use of cookies in accordance with our Privacy Policy.
×
Home » Antenna Characterization and Channel Measurements in the mmWave and Sub-mmWave Region
EMC/EMI

We employ a new antenna scanning system to measure the radiation pattern of mmWave and sub-mmWave antennas in the far field and describe broadband channel measurements in distinct indoor communication scenarios for frequencies up to 220 GHz. A motorized system is used to angularly scan propagation paths in a typical office and living room. As future indoor THz communication systems rely on electronically steerable antennas, a patch antenna array with a waveguide-to-microstrip transition is designed as a representative antenna under test (AUT).

The need for higher transmission data rates is increasing daily. To cope with this demand, the use of higher frequencies up to the THz region for short range and indoor communications over the next few years seems inevitable.1Conventional RF and microwave antenna systems are becoming less appropriate with increasing frequency. The remarkable advantage of using millimeter and sub-millimeter systems is the small size of components and hence the potential for miniaturization. As a consequence, test and measurement instrumentation needed for this frequency range is also miniaturized and often more advanced.2Much improvement is necessary to make these test and measurement systems generally available to stakeholders.

Characterization of mmWave antennas is a significant issue when designing a radar or a communication system. Frequencies between 30 and 300 GHz correspond to wavelengths ranging from 10 to 1 mm. Antennas of this size can easily be characterized directly in the far field, in contrast to components at RF and microwave frequencies that are typically characterized mathematically from near field measurements.

While the concept of ultra-broadband mmWave and sub-mmWave communications is established,3 antenna and propagation measurements for channel modeling of anticipated future communication systems are hardly available. Channel characterization requires measurements of line-of-sight (LOS) and non-line-of-sight (NLOS) propagation paths4 along with reliable knowledge of antenna gains and radiation patterns. Furthermore, it includes investigation of the influence of walls and objects on propagation. This includes scattering,5 diffraction6 and shadowing effects.

An antenna scanner was built at PTB for measuring the antenna radiation pattern in the far field region within a distance of up to three meters. The scanning system is able to record measurements with high accuracy at an angular resolution as small as 0.1°. The far field antenna scanner, which is sketched in Figure 1, has a rotor arm (Tx) and a rail arm (Rx). The AUT is placed on the rotor arm Tx, and the known measuring antenna is placed on the rail arm Rx. The rail arm is fixed on a track movable up to three meters from the vertical axis of the rotor arm. The rotor arm is rotatable within an angle Q from -90° to +90° around the vertical axis. Moreover, antenna fixtures on both arms are rotatable with an angle w from zero to 360° around the horizontal axis. This allows antenna measurements with any possible polarization. 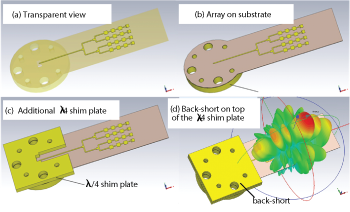 The scanner is installed in a semi-anechoic chamber equipped with absorbers to minimize unwanted reflections and block external signals. Since the frequency converter modules themselves are built in metallic boxes, additional absorbers are placed behind the antennas as well.

Transmission measurements based on vector network analysis are used to determine antenna characteristics (i.e., gain and radiation patterns) and propagation. For measurements using the antenna scanner, a Rohde & Schwarz ZVA-50 VNA with a ZVA-Z110 frequency extender is used to cover W-Band (75 to 110 GHz). The VNA supplies the mixers in the frequency extension modules with the necessary LO and RF signals. The measurement ports are WR-10 rectangular waveguide flanges. One port is connected to the antenna array, while the other flange is fitted with a 20 dB standard gain horn antenna.

Although the transition from rectangular to planar structures is already an established topic, it is still being improved, especially along with the development of new millimeter wave techniques.8-10 Designing a waveguide transition depends on frequency range, bandwidth and, of course, the substrate. The advantage of the transition used here is the absence of an impedance transformer and the optimized function using a back-short. Similar transitions have been presented and analyzed earlier by Leong and Shih.11,12 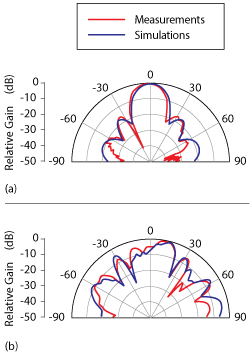 The output signal from the frequency extension module is coupled from the flange through a hole in the ground layer at the backside of the substrate. There, a rectangle of 2.54×1.27 mm2 is etched in the ground layer (see Figures 2a and b) to allow for wave propagation from the rectangular waveguide of the flange through the substrate and then to the microstrip line. On top of the antenna, a quarter wavelength shim plate (see Figure 2c) and a termination back-short (see Figure 2d) are placed. A slit is milled from the waveguide along the microstrip line to avoid contact between the feed line and the shim plate, allowing undistorted propagation to the antenna patches. The shim plate thickness and the feed line cavity width are optimized by including them in the antenna simulation. The shim plate combined with the back-short minimizes back-reflected radiation into the rectangular waveguide. In the substrate, the shim plate and the back-short, precision placement holes are drilled to allow for accurate positioning of the antenna on the flange of the frequency converter through locating pins. In addition to the four precision holes, another three holes are drilled for screws to tighten the substrate to the flange. The shim plate and back-short are fabricated with a high-precision CNC machine to minimize mechanical displacement.

The array is placed on the converter of the rotor arm for measuring radiation patterns with the antenna scanner. A W-Band standard gain horn antenna with 20 dB gain is attached to the other frequency converter on the rail arm. Assuming D is the linear aperture of the antenna, which is the distance from the first to the last patch of the array, then the far field lies at a distance d ≥ 2D2/λ,13which exceeds 4 cm for the 77 GHz array.

The antenna array is scanned at a distance of 50 cm with 1° resolution from -90° to +90° in the horizontal plane. Figure 3 compares the time-domain simulations to a measured radiation pattern of the 77 GHz array as measured in the H-plane (a) and E-plane (b) using the far field scanner. In agreement with the simulation, the main lobe in the H-plane has a half-power beamwidth (HPBW) of 23.2°, and the side lobe level is -10 dB less than the main lobe. In the E-plane, several side and minor lobes are observed whereas the main lobe lies at about 13° from the perpendicular projection (imperfect broadside) and has a HPBW of 15°. A further design optimization could improve the directivity of the antenna. Measurements with the far field scanner, especially at the main and sidelobes, agree well with simulation.

For modeling and design of communication systems in the lower THz frequency range propagation conditions need to be known. In the following we explain the procedure of ultra-broadband channel measurements for frequencies between 50 and 325 GHz in an indoor download scenario related to a living room environment. The measurements shown here include frequencies between 140 and 220 GHz. 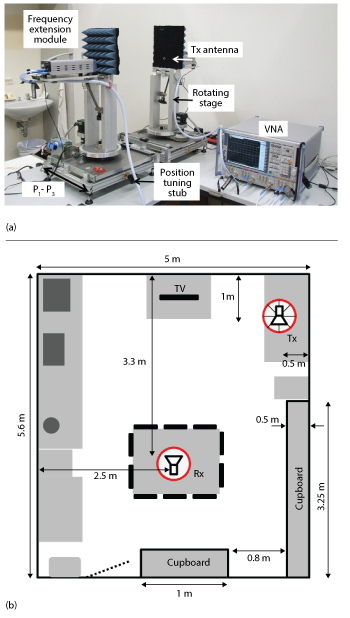 One of the most relevant scenarios for future mmWave and sub-mmWave indoor communications is the transmission link within a home environment, as in the case for the wireless local area network (WLAN). This implies that both transmitter and receiver establish a directed path for transmission with high data rates over a short propagation distance. To mimic this download scenario, a room equipped with appropriate furniture is prepared. The room (see Figure 4b) contains tables, chairs, cupboards for books and dinnerware, and a flat screen TV. The transmitter (Tx) and receiver (Rx) are both mounted on rotational units at a distance of 3.1 m from each other. The heights of the Tx and Rx are 1.9 and 0.72 m, respectively. In the room, most of the existing components, except the cupboards, are lower than the antennas. The Tx is placed at selected angles of 45°, 135°, 225° and 315° as shown in Figure 5. The transmitter is at the upper right corner and the receiver is at a table at the middle of the lower part. The receiver is rotated 360° with 1° resolution.

To better depict the propagation paths, the results are represented in polar coordinates as illustrated in Figure 5. The radial coordinate represents frequency and the angular coordinate represents the angle of rotation. The value of magnitude and unwrapped phase is presented according to the color bars. The radius of the circle starts with 140 GHz at the inner radius and increases with frequency to reach 220 GHz at the outer radius.

The upper part of Figure 5 shows the magnitude of the propagating signal and the lower part of the figure shows the measured phase. The measured result is depicted at the position of measurement where the receiver is placed on a table surrounded by several chairs (not shown here). The red color indicates a stronger signal where LOS and NLOS paths are identified. For example, when Tx is at 45°, the direct LOS path and multi-reflection paths are also observed. Scattering at the Rx holder also leads to additional multipath propagation.

Looking at the phase measurements, some propagation paths are more detectable and some are less depending on the received phase of the signal. Ray-tracing simulations could reveal more information about individual propagation paths, but that is beyond the scope of this article.

In this article we introduced measurement techniques to characterize antennas and propagation paths in typical indoor environments for future communication systems operating in the lower THz frequency range. We introduced an antenna scanning system that measured the antenna diagram with 0.1° of angular precision. A 4 × 4 patch array antenna was designed with a waveguide-to-microstrip transition and tested with this system. We also reported the broadband propagation measurements at frequencies up to 220 GHz. These measurements of magnitude and phase detected the main propagation paths – LOS and NLOS.

The authors acknowledge funding within the European Metrology Research Program (EMRP) in the Joint Research Project Metrology for Ultrafast Electronics and High-Speed Communications (JRP IND16 – Ultrafast). The EMRP is jointly funded by participating countries within the European Association of National Metrology Institutes (EURAMET e.V.) and the European Union. The authors would also like to thank Prof. Dr. Thomas Kürner and his group at the Institute for Communications Technology at Technische Universität Braunschweig for their cooperation. 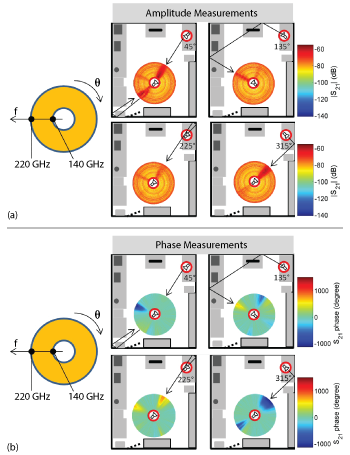 Figure 5 Data legend and measurements. Amplitude (a) and phase (b).

Mohammed Salhi received his Ph.D. degree in electrical engineering from the Technische Universität Braunschweig, Germany, in 2009. Since then he has been working as a researcher engineer in the Electromagnetic Fields and Antenna Measuring Techniques Group at the German National Metrology Institute (PTB) in Braunschweig, Germany. His main topics of interest are in the field of millimeter waves and terahertz technology.

Thorsten Schrader received the Dipl.-Ing. and the Dr.-Ing. degrees in electrical engineering from the Technische Universität Braunschweig, Germany, in 1992 and 1997, respectively. In 1998 he worked for EMC Test Systems LP, in Austin, Texas (now ETS-Lindgren, Cedar Park, Texas). In 1999 he joined the working group High Frequency Measurement Techniques of Physikalisch-Technische Bundesanstalt (PTB), Braunschweig, Germany. During 2000 he was a member of the Presidential Staff Office at PTB. In 2004, he became the head of the working group Electromagnetic Fields and Electromagnetic Compatibility.Schrader has been the head of the department of High Frequency and Fields since 2005 and the working group Antenna Measuring Techniques from 2006 to 2011. His current interest is the metrology for RF quantities in the mmWave and sub-mmWave range.