We use cookies to provide you with a better experience. By continuing to browse the site you are agreeing to our use of cookies in accordance with our Privacy Policy.
×
Stay Connected :
Home » Satellite market entering growth phase
Aerospace and Defense Channel Broadband Channel Industry News

The 34th annual SATELLITE conference and exhibition filled the convention center in Washington, DC, March 16 - 19. The organizers reported more than 12,500 attendees from 70 countries and over 350 exhibitors — a record turnout.

SATELLITE draws the executives from the satellite ecosystem, so the conference provided a comprehensive view of the business, technical and societal themes that are shaping the industry.

In the opening session, the CEOs of the largest four geostationary (GEO) satellite operators (Eutelsat, Intelsat, SES and Telesat) discussed the strategic issues they face:

Workshops throughout the week explored these and other topics; a few are described in the following paragraphs.

GEOs dominate the industry and satellite broadcast video services because their cost per bit is low and latency (240 to 280 ms round trip) is not a problem. However, this latency allowed undersea fiber to capture the transoceanic phone market, because real time satellite communication feels unnatural. GEO's physics-defined latency is also motivating the development of several lower altitude systems for mobile broadband services. In addition to LEO and medium earth orbit (MEO) satellites, with 40 to 120 ms latency, drones and stratospheric balloons are being explored by Google, Facebook and others. One of the sessions at SATELLITE explored the feasibility of such systems, termed stratellites.

Losing satellite spectrum to international mobile telecommunications (IMT) was a rallying cry at the conference. The upcoming WRC-15 meeting in November will consider allocating portions of C-Band to mobile services. The GSM Association (GSMA) seeks regulatory approval to use a portion of the 3.4 to 4.2 GHz band for small cells, to provide additional capacity for mobile networks. Satellite operators object to this for several reasons: the 3.7 to 4.2 GHz band is widely used for satellite downlink, and some regions are using 3.4 to 3.7 GHz. This spectrum has lower rain fade than Ku- and Ka-Band, which is important for link margin in the tropical regions. Also, technical studies show that signals from terrestrial cellular networks will overpower the lower-level satellite signals, making them unusable. Finally, satellite operators argue that the market claims of the IMT industry are overstated (some would say hyped), citing WiMAX as an example of a market that never materialized.

Greg Wyler, CEO of OneWeb gave an inspiring presentation describing his vision for OneWeb, a LEO constellation of “micro” satellites. Functionally, OneWeb will be an extension of the cellular LTE network that will provide broadband mobile access when the user is away from a terrestrial connection. The network will use Ku-Band to relay signals between the satellites and small, solar-powered ground stations. These ground stations will serve as cellular base stations, communicating with the user's cell phone. OneWeb will be a roaming partner for cellular operators and totally transparent to the user. 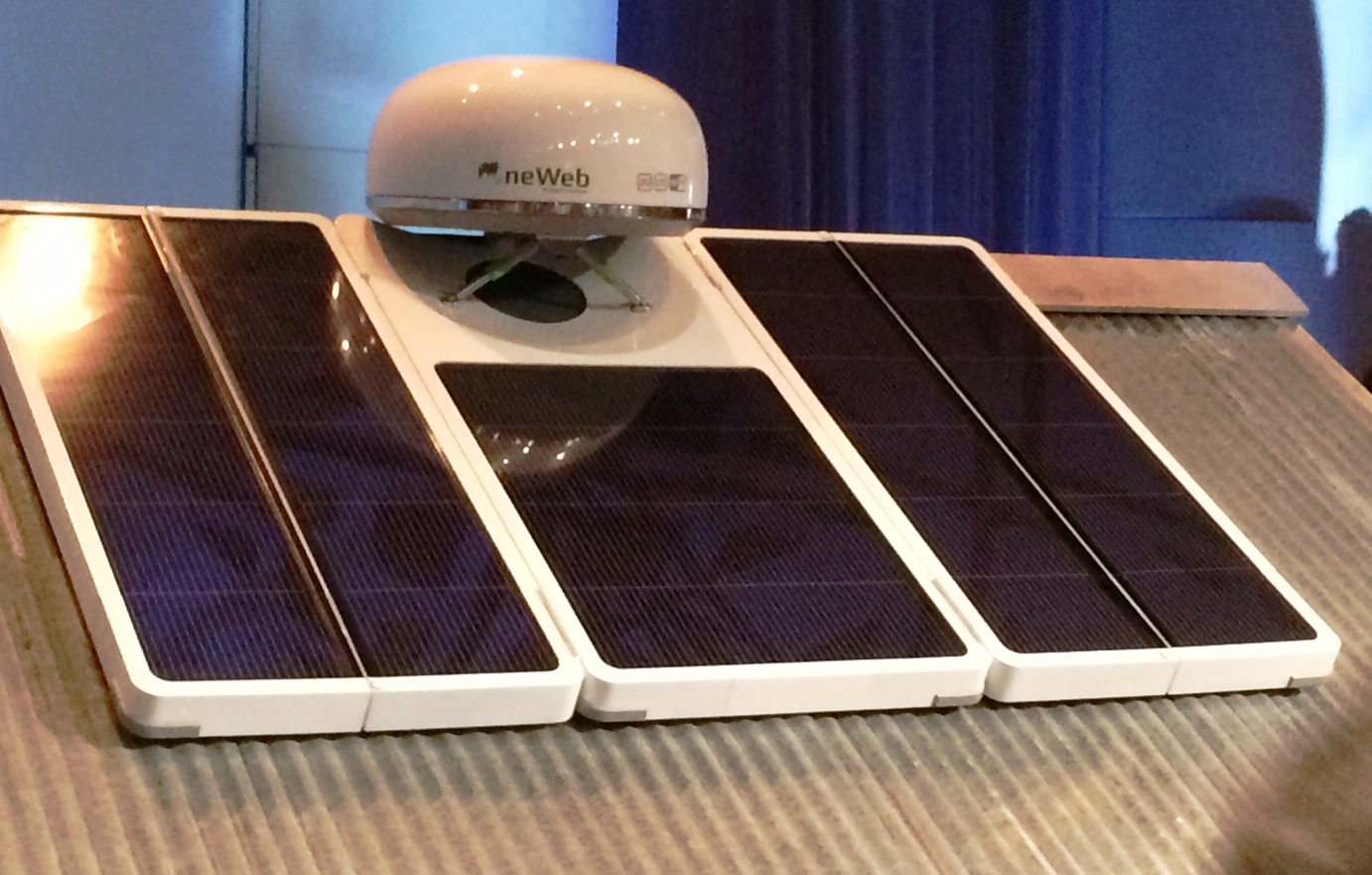 OneWeb has other use cases beyond cellular roaming in remote areas. The network will provide broadband services to aircraft and emerging countries as well as emergency communication when terrestrial systems are destroyed by natural disasters.

Wyler's vision for OneWeb was motivated by his work in Africa, helping to connect communities to the Internet. Observing the resulting economic development and gains in personal empowerment and wealth inspired him to literally launch O3b Networks. O3b (Other 3 billion) is a 12 satellite MEO constellation that provides global mobile coverage between 45 degrees north and south latitude. This is the “emerging and insufficiently connected” region of the globe where over 3 billion live — hence O3b.

In addition to his success launching O3b, Wyler has recruited Paul Jacobs, Executive Chairman of Qualcomm, and Richard Branson, founder of Virgin Group, to invest and serve as members of OneWeb's board. Wyler's vision and credentials are compelling. This is a project to follow.

The number of new systems and platforms being proposed and the level of corporate and private investment are reminiscent of the ventures that were spawned in the late 1990s, fueled by the presumed success of Iridium and the dot-coms. Recall Teledesic, Celestri, SkyBridge? The parallels were discussed in several SATELLITE sessions, with some arguing that this time will be different. As at least one participant noted, quoting Mark Twain, “History doesn't repeat itself. But it does rhyme.” 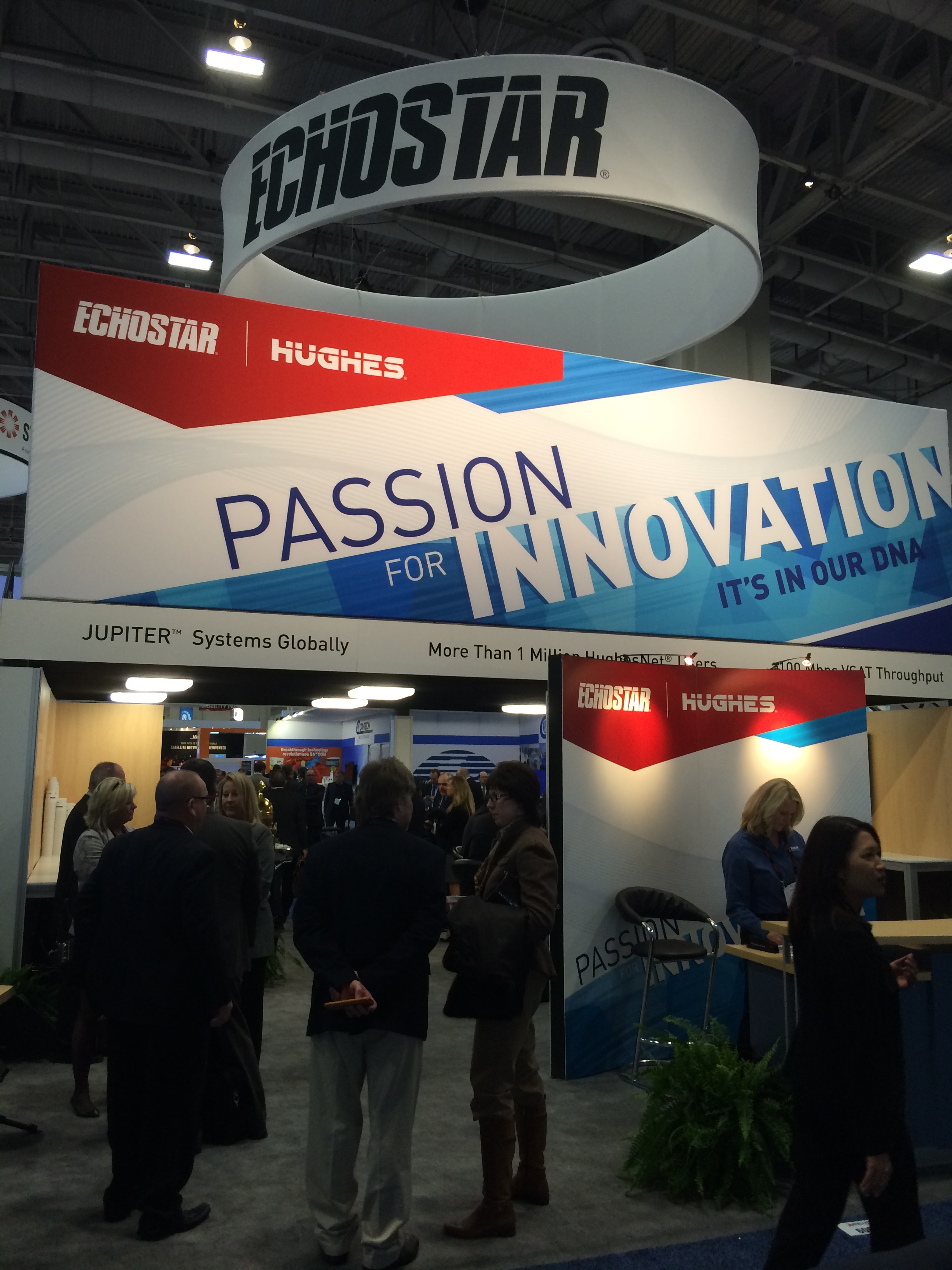 The exhibitors at SATELLITE 2015 represented the full satellite ecosystem, from operators to microwave components. Here are a few familiar companies from the list of over 350 exhibitors:

API Technologies, a supplier of microelectronic products spanning DC to 50 GHz, has made a commitment to grow their space business. They were briefing potential customers on their design and manufacturing capabilities.

HUBER+SUHNER offers connectivity solutions for harsh environments, including defense and space. Their products include RF cables and connectors, antennas, and fiber optic cables, connectors and assemblies.

LPKF demonstrated their circuit board prototyping equipment, which enables a board to be fabricated from a design file in just minutes. 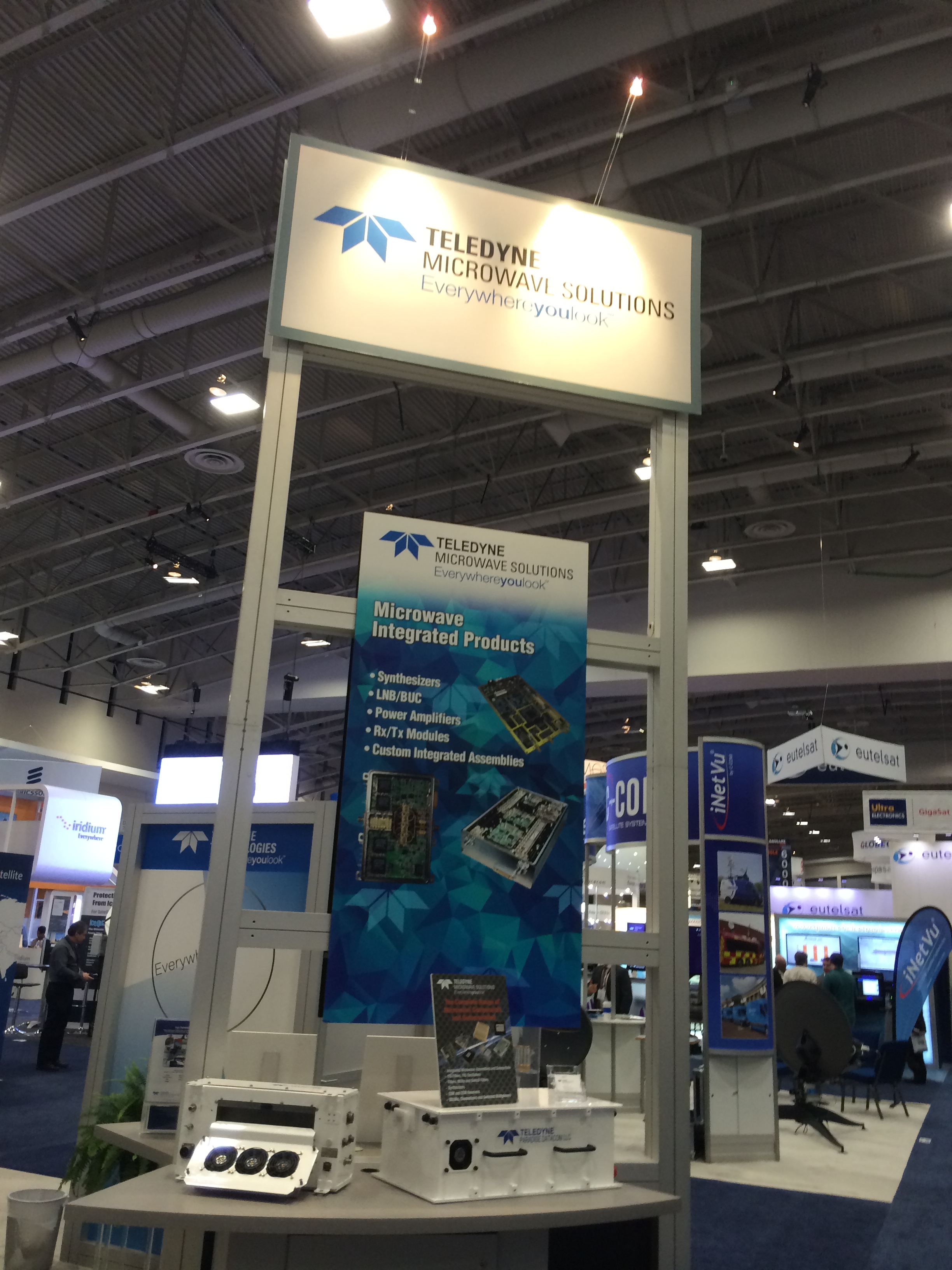 Mini-Circuits had a large booth displaying the wide range of RF and microwave components from their 28 product lines.

Teledyne Microwave Solutions presented a paper on their Ka-Band block up-converter (BUC) and low noise block down-converter (LNB) products. They cover both the commercial and military bands in a single, small package.

Noticeably absent from the exhibit this year was TriQuint, now Qorvo after the merger with RFMD. They were listed as an exhibitor; however their booth space was empty.

The exhibition hall was nicely filled with booths and traffic, one more sign that the satellite industry is healthy. If the markets and proposals widely discussed lead to hardware and launches, the industry will be more than rhyming with the heady optimism of the late 90s. 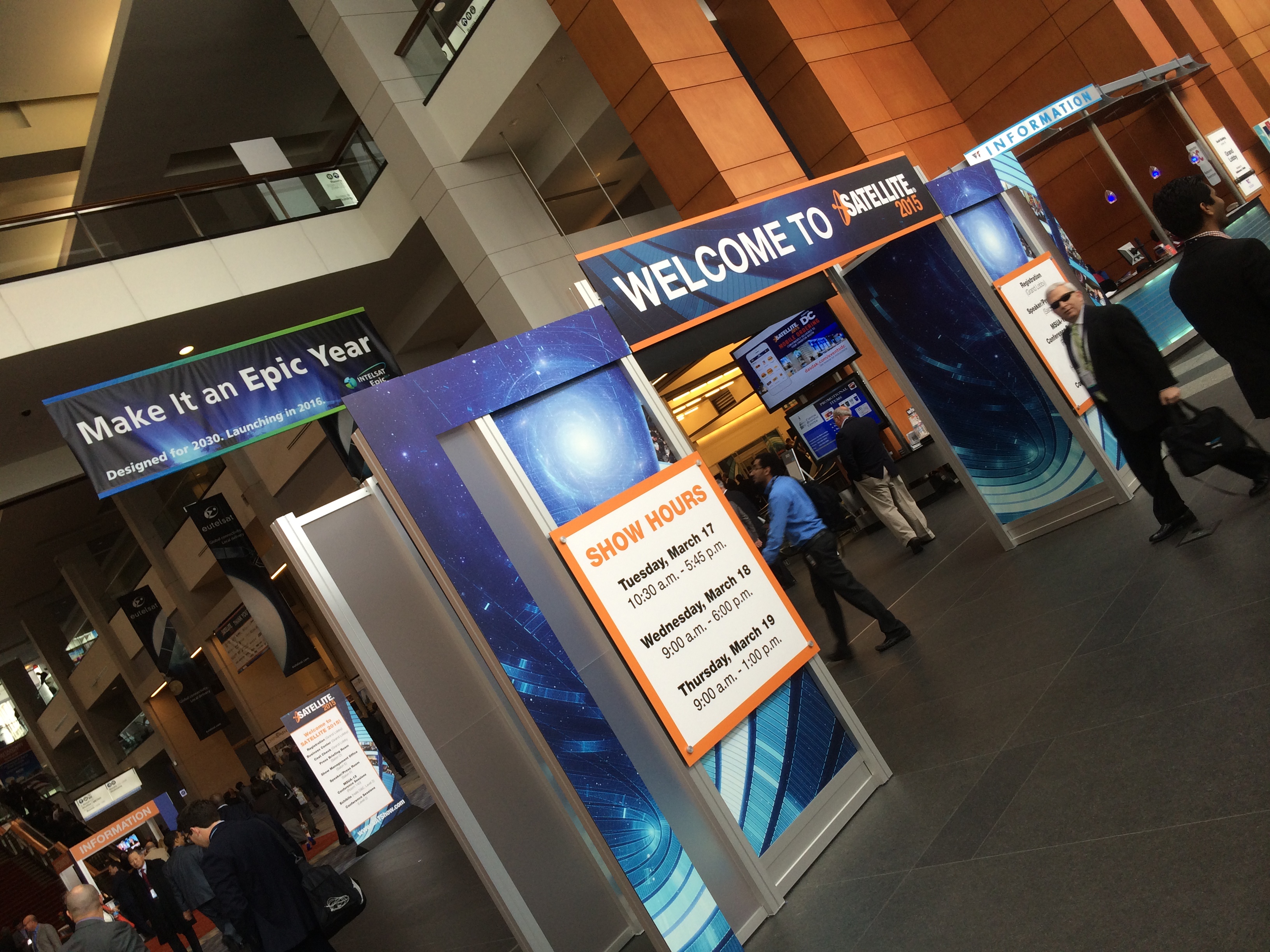