We use cookies to provide you with a better experience. By continuing to browse the site you are agreeing to our use of cookies in accordance with our Privacy Policy.
Home » “Spike” Software Boosts Performance 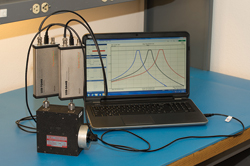 Signal Hound announced a significant software upgrade — called Spike — that will integrate all of its SA-series spectrum analyzers and TG-series tracking generator models, past and present, under the same open source graphical user interface (GUI) platform as the Signal Hound BB60C spectrum analyzer.

The Signal Hound USB-powered SA44B and SA124B are software defined radios (SDR) optimized as spectrum analyzers. The SA44B operates from 1 Hz to 4.4 GHz and the SA124B operates from 100 kHz to 12.4 GHz. The Signal Hound TG44A and TG124A are tracking generators that work with the SA-series spectrum analyzers. Both the SA-series and TG-series instruments are compact, simple to use, and effective troubleshooting tools for field use, general lab use, engineering students, ham radio enthusiasts and electronics hobbyists.

The new Spike software allows the SAs to function as real time spectrum analyzers for sweeps of 250 kHz and less — that means every RF event will be captured when using spans that are ≤ 250 kHz. Another improvement is sweep speeds that are up to 8× faster for spans between 500 kHz and 2 MHz. In addition, the SA graphics now include color persistence and a 2D waterfall display. The TG devices also benefit from Spike. Long-standing stability issues are resolved, to include making the high dynamic range user friendly and efficient. The tracking generators can also save 1000-point data files that are loaded in the path loss table for normalizing precision measurements using RF cables and/or antennas. New to both the BB60C and the SA devices is a zero span pre-triggering function and calibrated I/Q data streaming.

Developers are able to customize the Spike software by changing, adding and deleting functions, layouts, and utilities in the SA and TG devices. A liberal software license allows developers to compile the modified spectrum analyzer code for redistribution. Even though the SAs are hardware limited when compared to the BB60C, they can now enjoy the flexibility and power of the BB60C software platform. The software is available free of charge due to the continued support and loyalty of the Signal Hound user community. Visit www.signalhound.com/spike for a free download.