We use cookies to provide you with a better experience. By continuing to browse the site you are agreeing to our use of cookies in accordance with our Privacy Policy.
Home » Microwave Vector Signal Generation Up to 40 GHz

In April 2013, when Rohde & Schwarz launched the R&S SMW200A vector signal generator with up to two 6 GHz RF paths, it was a significant introduction. Not only could it be used for straightforward signal generation, it also simplified the setup of complex measurements. Signals could be internally added with frequency, level and phase offset to easily create scenarios such as wanted signal plus interferer, dual cell and Tx/Rx diversity with real time fading and additional white Gaussian noise (AWGN) – all in just one full-featured vector signal generator.

Now, with the introduction of four new frequency options that extend the upper frequency limits of the R&S SMW200A to 12.75, 20, 31.8 and 40 GHz, the company has taken this approach into the microwave range. This makes the R&S SMW200A suitable for applications in the area of aerospace and defense (A&D), telecommunications, research and education. The R&S SMW200A is the first and only instrument to integrate two powerful baseband generators with 160 MHz bandwidth and an I/Q modulator with 2 GHz bandwidth in a single instrument and maintain the outstanding characteristics and functions listed above. It allows users to concentrate on the measurement task at hand without the hassle of cabling and calibrating discrete test setups.

Telecommunications standards specify comprehen­sive conformance tests. For example, for LTE tests (Release 11, 3GPP TS 36.141), the wanted signal is around 2 GHz, however the interfering signal can be up to 12.75 GHz. This test can be executed with just one R&S SMW200A vector signal generator, since it can be equipped with up to two RF paths.

The signal quality is just as impor­tant as the multitude of functions. An excellent adjacent channel leakage ratio (ACLR) is vital for a vector-modulated interfering signal whose frequency is close to the wanted signal. Extremely low wideband noise (region 1 in Figure 1) is required for a continuous wave (CW) interferer at 12.75 GHz. At the same time, the level accuracy of the wanted and interfering signals must be high (region 2 in Figure 1), and the signal content must be precisely specified. These are signal scenarios where the correct configuration and signal quality will have a decisive impact on the accuracy and reproducibility of measurement results. 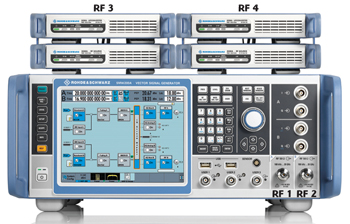 Measurements on active antenna systems for beam forming applications require high quality, phase-coherent test signals. One common reference is usually not sufficient to ensure that the relative phases remain stable over a long period of time. LO coupling, such as offered by the R&S SMW200A, is required. LO coupling enables extremely precise and long-term stable phase synchronization of both generator paths – internally in a single instrument, without additional cabling. If additional phase-coherent signals are required, the LO signal of the R&S SMW200A master signal generator can be forwarded to R&S SMW200A slave signal generators.

In phase-coherent applications, a cost efficient alternative to an additional signal generator is to use the R&S SGS100A RF source and R&S SGU100A up-converter combination (see Figure 2). This hardware enables the generation of RF or I/Q vector modulated signals up to 40 GHz.

A very powerful mini-system combines one R&S SMW200A with two internal 20 GHz paths plus two additional R&S SGS100A/R&S SGU100A 20 GHz combinations. This setup provides a total of four 20 GHz signals. When necessary, fading and/or AWGN can be added. The complete setup is controlled by the master signal generator.

One of the many applications for direct microwave links (point-to-point communications) is the net­working of base stations via the air interface instead of wired connections. These connections require high data rates, which are achieved via an appropriately high order of modulation (128 QAM and higher) and wide bandwidths. 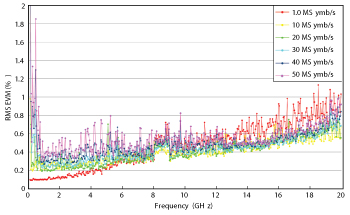 Figure 3 EVM vs. frequency for various data rates, measured on a 1024 QAM signal.

This obviously places high demands on the sig­nal quality. Due to its out­standing EVM, the R&S SMW200A is ideal for these types of measurements, even for high orders of modulation and wide bandwidths (see Figure 3). For a 10 GHz carrier frequency, the measured EVM is 0.36 percent with 128 QAM and 0.37 percent with 1024 QAM (each with 20 MHz bandwidth).

When it comes to sophisticated pulse generation, enhanced sequencing capabilities, antenna diagrams, antenna scans and scenario simulation for single and multiple emitters, the ideal tool is the R&S SMW200A together with the new pulse sequencer software. The signal calculated by the pulse sequencer (installed on a PC) can be uploaded to the R&S SMW200A, which generates the desired scenario up to 40 GHz. This solution covers automotive radar applications, radar applications, coexistence testing of radar and telecommunications signals and also a wide range of A&D applications.

The R&S SMW200A features 2 × 20 GHz or 1 × 40 GHz with up to two basebands, fading simulation and AWGN in a single instrument. This considerably simplifies complex measurements, minimizing the effort involved and eliminat­ing sources of error.