We use cookies to provide you with a better experience. By continuing to browse the site you are agreeing to our use of cookies in accordance with our Privacy Policy.
Home » Terma's SCANTER radar system selected for Royal Navy
Aerospace and Defense Channel European Industry News Industry News

Terma’s SCANTER 4100 radar system has been selected and ordered by BAE Systems for integration on board the UK Royal Navy’s three new River class Offshore Patrol Vessels (OPV). The latest version of the SCANTER 4103 proven 2D Naval Air & Surface Surveillance Radar features the latest in software and powerful processing electronics resulting in improved performance. The first radar system including stabilized platforms and antenna will be delivered in 2016. 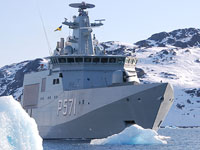 BAE Systems has been contracted by the UK Ministry of Defence to build three Offshore Patrol Vessels for the Royal Navy. Production began in October this year, with the first of class expected to be delivered in 2017. The 90 m, 2,000 tons vessels will play a key role in protecting UK interests both at home and abroad. With a maximum speed of 24 knots, a range of over 5,000 nautical miles and helicopter landing capability, the ships will be globally deployable and capable of ocean patrol.

Jens Maaløe, president and CEO, Terma, said, “We are proud that the Royal Navy and BAE Systems has selected Terma as their supplier of radar solutions for these Offshore Patrol Vessels. This is an invaluable sign of trust and a stamp of quality for our products.”

The SCANTER 4100 series is among others in operation with the UK Royal Navy, French Navy, Brazilian Navy and the Royal Danish Navy, on various ship types including LPD, Offshore Patrol Vessels, Large Support Ships, and Patrol Corvettes and Frigates.