We use cookies to provide you with a better experience. By continuing to browse the site you are agreeing to our use of cookies in accordance with our Privacy Policy.
×
Home » Anritsu earns first GCF approval for validated eMBMS performance test case supporting LTE
Industry News 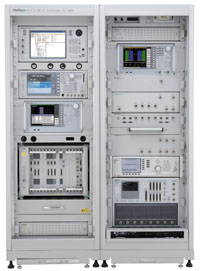 The approval is the most recent example of Anritsu’s focus on earning GCF/PTCRB validations to help facilitate early rollout of LTE eMBMS in various frequency bands. eMBMS, the enabling technology of LTE Broadcast, has been deployed in South Korea and rollouts are expected before year end in North America. With the eMBMS option installed, the ME7873L can verify mobile device performance to ensure operation of broadcast services, including sending multiple video streams from different angles to users at densely populated areas such as concerts and sporting events.