We use cookies to provide you with a better experience. By continuing to browse the site you are agreeing to our use of cookies in accordance with our Privacy Policy.
×
Stay Connected :
Home » High Efficiency Amplifier for Picocells 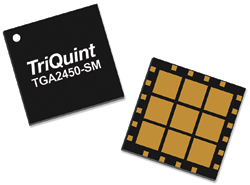 According to Cisco®, global mobile data traffic reached 1.5 exabytes (1018 bytes) per month by the end of 2013, nearly doubling the 820 petabytes (1015 bytes) per month from 2012. [Source: The Cisco® Visual Networking Index (VNI) Global Mobile Data Traffic Forecast Update.] This data explosion is driven by video streaming, picture uploading and cloud-based services on smart phones and other handheld devices. With mobile broadband data traffic growing exponentially, the traditional homogeneous network has had to extend bandwidths, increase modulation and increase cell sectors to meet demand. [Source: Jeanette Wannstrom, masterltefaster.com and Keith Mallinson, WiseHarbor, “HetNet/Small Cells” 3GPP.] There is a limit to subdividing sectors, though, as it is becoming very difficult to procure new cell sites for the large towers often employed for macro base stations. In addition, the classical macro cell site cannot maintain high data rates for users at the outer edge of the site.

To meet this data growth challenge, the industry is making the change from homogeneous networks to heterogeneous networks (HetNet). A HetNet is simply a network which uses multiple types of access points rather than a single type. It gives the network the opportunity to offload users from the primary macro site to a local micro, pico or femtocell site that offers the user higher data rates and higher quality of service (QoS).

An example of a heterogeneous network is shown in Figure 1. Small cell base stations (BTS) in the form of femto and picocell BTS are embedded within the larger macro BTS network. Femtocells can be clustered in neighborhoods or within floors of buildings. Pico-cells can be placed in high capacity areas of the macro cell site and for whole floor coverage in buildings. Key parameters for the various small cell BTS are given in Table 1. 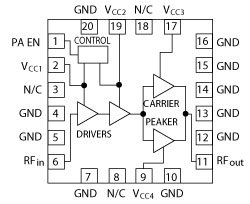 While the HetNet has the advantage of improving the user experience and adding data capacity, the available small cell base stations have been met with challenges from a business case perspective due to cost, size and backhaul. Looking at these challenges, a number of semiconductor companies have introduced highly integrated single chip transceiver solutions for the small cell BTS market, particularly the femtocell class. However, the internal power amplifiers remain discrete in form and suffer from poor efficiency. Little has been offered for the picocell class of BTS—until now. TriQuint has taken the challenge to develop and produce a family of miniaturized, multi-stage power amplifier modules intended to be a plug-and-play component for picocell base stations requiring extremely small form factor.

The first product of the picocell power amplifier module family is TriQuint’s TGA2450-SM, a fully integrated surface mount three-stage power amplifier module. The final stage is a Doherty configuration in order to significantly increase power added efficiency over current integrated solutions. The block diagram is shown in Figure 2. The module has 50 ohm RF input and output impedances and requires minimal external components. The TriQuint TGA2450-SM is extremely compact at a 20 × 20 × 1.5 mm size, offering a much smaller footprint compared to traditional discrete component solutions and much higher power and efficiency than existing integrated solutions. Other features include on-chip temperature compensated bias circuits, two positive supply voltages (5 and 18 V) and a single pin for power down functionality. 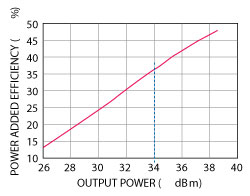 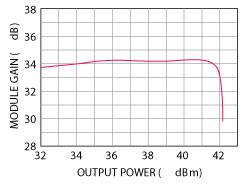 The TriQuint TGA2450-SM module has 35 dB of power gain and 35 percent power added efficiency when delivering 2.5 W of average power at 8 dB back off. Saturated power is approximately 16 W. The module PAE drive-up curve using a 20 MHz LTE signal with 8 dB PAR is shown in Figure 3. The gain drive-up curve under CW signal is shown in Figure 4. When stimulated with a 20 MHz LTE signal having a PAR of 8 dB, the TGA2450-SMcan be corrected to better than -50 dBc, using a low order digital pre-distortion algorithm (DPD). Uncorrected, adjacent channel power is -33 dBc. Table 2 summarizes the key performance parameters. 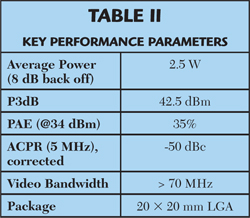 Other devices in the TriQuint picocell module family include the TQP2451 (1.9 GHz) and TQP2453 (1.8 GHz). All modules are designed to have similar gain and efficiency at 34 dBm average output power. The modules also have a common footprint and I/O configuration as the TGA2450-SM to maintain compatibility in manufacturing. TriQuint expects to release the complete family of products in 2014.

Small cell base stations hold the promise to improve data throughput of the heterogeneous network and provide a better user experience as data demand dramatically increases. Although the power consumption of the small cell is significantly less than a macrocell BTS, when numerous picocell class base stations are added into the macro BTS footprint, the total power consumption will increase significantly. Thus, there is a need for significant improvement in efficiency for the small cell BTS. The TriQuint TGA2450-SM helps meet that power consumption need by improving typical multi-stage PA power added efficiency to 35 percent. The TriQuint family of picocell power amplifier modules is designed to be a true 50 ohm plug and play component for OEMs developing small cell base stations in multiple cellular bands.