We use cookies to provide you with a better experience. By continuing to browse the site you are agreeing to our use of cookies in accordance with our Privacy Policy.
×
Home » Hybrid Rotary Joints for Radar Applications 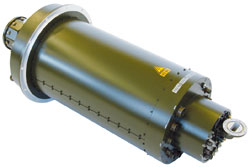 Surveillance radars employ multichannel rotary joints as transition gears between the transmit/receive equipment and a directional antenna that is rotating around its azimuth. The task of the rotary joint is to enable low-loss transmission channels between stator and rotor for various electrical and optical signals and also for electrical power and media, if necessary.

Transmission channels can be divided into four different categories according to their primary function: RF channels (high and low power signals), power channels (for power supply of electrical equipment), media channels (cooling media, dry air, etc.) and data channels (optical, Ethernet, RS232, RS422…). SPINNER has built up increasingly complex hybrid rotary joints to serve all those customer requirements. Here, a range of the latest transmission paths that have been developed for radar applications is described.

The basic function of a classical low power RF joint is the submission of data that is collected by the antenna. Figure 1 shows an L-Band medium power channel rotary joint with a relatively large center opening. It has a frequency range of 1 to 1.1 GHz, an average power rating of 500 W, typical insertion loss of 0.5 dB and a 70 mm diameter. 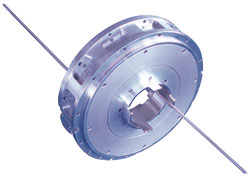 A higher data rate can be achieved with a contactless fiber optic rotary joint. Optical rotary joints are available as single mode as well as multi-mode solutions with up to 20 channels. SPINNER’s new optical rotary joint family is available with four mechanical housings: A single channel joint, a dual channel joint, a small multichannel housing with space for up to six channels (shown in Figure 2) and a large multichannel housing with up to 20 channels. All optical rotary joints represent a high technical standard with a large temperature range, a high mechanical capability against vibration, shock and bump, as well as very attractive optical parameters.

A newly developed module for contactless bidirectional data transmission with an Ethernet interface is shown in Figure 3. The standards it supports are: 10BASE-T, 100BASE-TX and 1000BASE-T. This module automatically recognizes and selects the connected devices’ current Ethernet standard and duplex mode (full or half). All Ethernet modules can be stacked directly and will be attached together to an Ethernet unit which can be implemented into a rotary joint assembly. 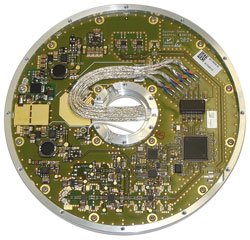 Modern radar antennas generate the RF power directly on the rotating part. This process calls for a cooling liquid which needs to be transmitted up and down. In total, three media channels, one dry air and two cooling media, are needed for a typical modern rotary joint. The essential technical data is summarized in Table 1.

The technical data has been chosen in such a way that they meet the customer requirements for a large number of applications. The module was thoroughly tested in SPINNER’s test facility and all data stated could be proven in the tests.

When developing the media module, care was taken so that it can also be used in a wide range of other joints. The mechanical flanges allow for virtually any integration into any hybrid joint. In addition to this module, a second module is currently being developed that has an identical technical design, but allows a considerably higher flow rate for cooling water.

The lifetime of a rotary joint is normally limited by the mechanical wear of the sliding contacts. In order to reduce maintenance and increase reliability of a rotary joint, it is necessary to reduce the number of sliding contacts. To eliminate wear completely, contactless systems need to be used. Contactless systems are available for RF channels (choke systems with limited bandwidth), data channels (Ethernet and optical joints), media and some power transmission in the range up to 1 kW. 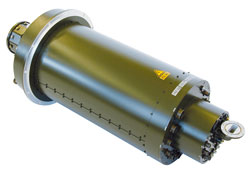 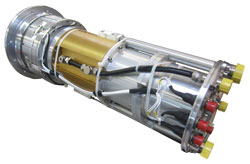 Several rotary joints with multiple transmission paths have been realized. The multichannel rotary joint in Figure 4 is used for a radar employing a passive electronically scanned array (PESA). On the antenna unit, which rotates at a speed of up to 30 RPM, digital interface signals as well as the electrical power supply necessary for feeding active electronics and elevation drives are needed. Four Gigabit-Ethernet channels are realized in a contactless way, whereas the power supply is realized with a classical slip ring module.

In 2013, SPINNER developed and manufactured the first hybrid rotary joint not serving an RF path. The media joint was designed for a customer project, in which a phased array antenna is used. In order to cool the electronic components, the supply antenna is supplied with the corresponding coolant.

In Figure 5, the integrated media joint is shown in the assembly process prior to the final completion with the power and signal slip ring module. The elements for the different transmission channels, such as the modules of non-contacting Ethernet transmission, cooling water and air, are clearly identifiable. In addition, there is a 20-channel fiber optic multimode rotary joint as well as a 14-bit encoder system inside the hybrid system.

As can be seen, the SPINNER portfolio of hybrid rotary joints for radar applications is comprehensive and expansive, meeting all requirements, in any format. The range continues to expand and 2014 will see new products enter the market.