We use cookies to provide you with a better experience. By continuing to browse the site you are agreeing to our use of cookies in accordance with our Privacy Policy.
Home » Carrier Aggregation will hit the market in 2013
WaveGuide

Carrier Aggregation will hit the market in 2013

Next year, the exaggerated TV commercials for fast mobile data may get even more outrageous.  Major LTE operators are introducing Carrier Aggregation to their networks and handsets, adding bandwidth in a move to reach 150 Mbps data speeds.

Set aside the question of whether this kind of data speed is actually necessary for watching a YouTube video, or for downloading your email.    Here in the American market, it’s clear that consumers want faster, and they’re always willing to pay a little more to have the fastest mobile service.

If you have a need for speed, Carrier Aggregation is the cheapest way to get there. There are two primary forms that CA will take:

There are numerous benefits to Carrier Aggregation, beyond the advertising value of blazing speed.  By spreading traffic across multiple LTE bands, the operators hope to offer a more consistent user experience.  Fading at one frequency band can be balanced with better coverage in another band.   In addition, mobile operators hope to balance their data traffic between multiple bands, essentially offloading the most impacted bands during peak hours with supplemented downlink bandwidth in another band.  These benefits are still unproven in highly loaded networks, and some operators have concerns that base station coverage in different bands will result in much different cell footprints (especially in the case of “low bands” below 1 GHz and “high bands” above 1.8 GHz).   The difficulty of RF planning for multiple bands could slow down deployment, or limit deployment to indoor applications.

Carrier Aggregation will be asymmetric in almost all networks for the next few years. Transmission in multiple bands would be a drag on battery life, so uplink inter-band CA is not considered viable by most operators currently.  In most scenarios, downlink-only CA is okay. Most mobile data demand is asymmetric in nature, with downlink traffic outweighing uplink traffic by a factor of 3 or more.   (Notably, special events such as concerts and sporting events are the exception to this rule, with more uplink traffic than downlink traffic).  Supplemental Downlink Bands will become increasingly useful, as asymmetry can be handled with inexpensive unpaired spectrum.  Mobile Experts is tracking 47 3GPP and other mobile bands, as well as 50+ different CA band combinations in our Handset and Small Cells forecasts, with new CA combinations identified monthly.  A few of the more likely band combinations are shown below, and a more comprehensive tracking sheet is available if you click here. 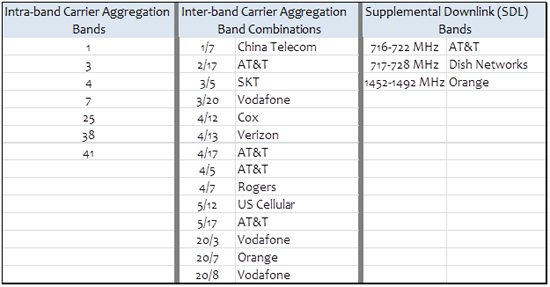 Many base station component suppliers are chomping at the bit, with the prospect of additional filter and power amplifier sales.  They should hold their horses.  It’s not clear that CA will be implemented in more than 20% of macro base stations.   After all, if CA is intended to help with traffic congestion in high-density locations, then only the base stations in crowded cities will be retrofitted.

Small cells, on the other hand, will be impacted by CA requirements.  The additional cost for a filter and a power amplifier below 1 W can be minimal, so many operators are specifying small cells with multiple bands.   Mobile Experts predicts that the average 2017 small cell will include 2.2 frequency bands.  Accounting for MIMO in the downlink, the average 2017 small cell will include 4.2 transmitter paths. 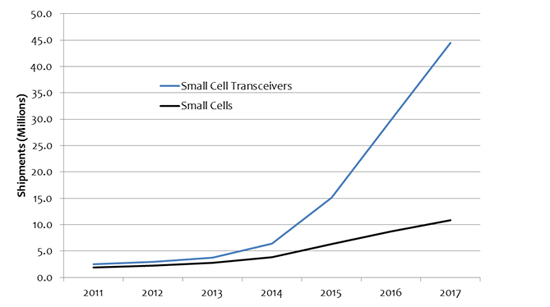 Handsets will also be impacted by CA requirements, with multiple receiver chains active simultaneously.  New switches will be required to activate multiple receiver filter paths, and antenna feeds and antenna tuning techniques must be adapted to allow multi-band performance.   Most smartphones should be expected to adopt CA features over the next few years.

Overall, Carrier Aggregation does not increase spectral efficiency, and only has a tangential impact on capacity.  But it will have an impact on single-user bandwidth in some cases. CA will help operators to load spectrum more evenly, and it will dramatically impact the market for RF devices in handsets and small cells.   The game begins this year.

CMOS takes a bite out of the GaAs market