We use cookies to provide you with a better experience. By continuing to browse the site you are agreeing to our use of cookies in accordance with our Privacy Policy.
Home » CMOS takes a bite out of the GaAs market
Cellular 4G/LTE Channel WaveGuide

CMOS takes a bite out of the GaAs market

Qualcomm introduced the RF360 product seven months ago, and people are still asking me for insight into what it means.   Are Skyworks and RFMD in trouble?   What will Intel and Mediatek do?   Is CMOS performance good enough?

Of course there are performance tradeoffs with CMOS power amplifiers.    Basic physical properties give GaAs superior characteristics for efficiency/linearity/power tradeoffs.    If performance was the only important metric, we would stick with GaAs discrete devices.

But performance is not the only important variable.    Cost and flexibility are also very important, and CMOS has reached the point where its performance is acceptable in many applications.  Here are some examples: 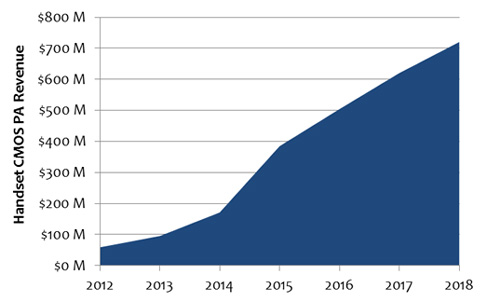 Over the past five years, Qualcomm lost a big chunk of the market to MediaTek and Spreadtrum, as these companies have addressed Chinese customers with low-cost products that are very simple to implement.    With great local applications engineering support, MediaTek in particular was able to steal a sizable portion of the “reference design” market. Qualcomm’s strategy is to offer something even simpler than a “reference design”, by integrating the difficult RF portion into a module that is closely tied to the baseband, transceiver, and power management modules.    Buying the entire chipset from one company can simplify the modem and radio integration...making the local applications engineering support less relevant.   Think about it:  PA sales won’t move the needle on Qualcomm’s $24B in revenue.  By offering the RF solution, they have a chance to sell modems into 200-400 million entry-level smartphones in China in 2015.

Of course the game does not stop there.  Intel and Broadcom have demonstrated CMOS amplifiers with envelope tracking, and we anticipate product announcements from them soon.   Pressure is building on MediaTek to react with a “simpler” product of their own.  Some of these baseband vendors will stick with GaAs, and others will introduce CMOS PAs.    The RF Front End vendors will move to integrate their own Complete Front End modules.  One way or another, Mobile Experts anticipates consolidation in Envelope Tracking and the PA market, to simplify R&D projects by pulling teams together into common ownership.

Will GaAs power amplifiers disappear in three years?  Of course not.  But the growth of CMOS PA revenue will essentially steal all of the revenue growth from the GaAs PA market over the next five years, leaving the GaAs PA market flat.

Clash of the Titans - GaAs vs CMOS PAs