We use cookies to provide you with a better experience. By continuing to browse the site you are agreeing to our use of cookies in accordance with our Privacy Policy.
×
Home » CST STUDIO SUITE 2013: Performance, Usability and Versatility
Software/EDA Channel

CST of America
No Comments 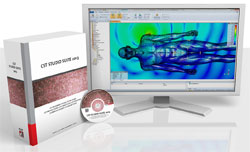 Feature range and user experience are sometimes seen as mutually exclusive. The ever-increasing complexity of design tasks means that engineers need a broad range of powerful simulation tools and features at their disposal, but only a few of these will be helpful in any one situation. Knowing which feature to use and when to use it can be a skill in its own right. CST STUDIO SUITE® 2013 streamlines the simulation process without compromising on its power or flexibility.

The redesigned user-interface guides the engineer through simulation projects, while behind the scenes, the solver technology has been further optimized to speed up the modeling of large and complex systems. The 2013 version also adds an array of new features to extend the capabilities of its solvers, broadening the range of tasks that CST STUDIO SUITE can be applied to.

The most noticeable change in version 2013 is the new Ribbon GUI. The Ribbon is an easy-to-use tab system that groups features and menus together according to their place in the simulation process, so that only the most relevant options are shown for each stage of the workflow.

More than just a way to display icons, the Ribbon can guide the engineer at each step of the way. The Ribbon offers benefits to both new and experienced users, flattening the learning curve and providing easier access to tools and options.

Engineers often end up running similar types of simulation over and over again. The project wizard makes the process of setting up a simulation quicker; the engineer can select from an extensive palette of preconfigured simulation types covering a wide range of applications. Not only does the project wizard instantly set the units and boundary conditions to those appropriate for the job, it also suggests the best solvers for the situation.

The configuration can be easily adjusted by the user based on the experience gathered from past designs or from onsite testing, and this modified configuration can be stored within the project wizard and reused easily. Using custom configurations can speed up the process of modeling and simulating many similar devices.

Through the company’s close co-operation with Intel®, CST’s solver technology has also been optimized to take advantage of the power offered by the latest generation of processors. The mesh set-up process runs more efficiently, with the accurate curved tetrahedral mesh now the default for the frequency domain solver, and both the transient solver and the frequency domain solver will run significantly faster on the latest Intel infrastructure.

CST integrates more high-performance computing (HPC) simulation techniques into its products every year, and this trend continues with CST STUDIO SUITE 2013. The use of GPU acceleration offers significant speed advantages for simulations on compatible hardware.

While previous versions offered GPU acceleration for the transient solver, particle-in-cell (PIC) solver and integral equation solver, the 2013 version adds to that the transmission-line matrix (TLM) solver. The new version also extends the range of compatible GPUs to include the Nvidia Kepler architecture, which is substantially faster than earlier GPU types. 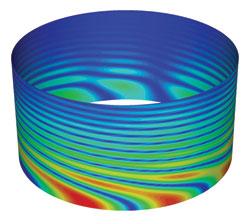 Figure 1 Cylinder scan of an electronic device with housing.

The cylinder scan is a standard laboratory measurement used to investigate the electromagnetic compatibility (EMC) characteristics of devices. Cylinder scans give the fields around the device at a fixed distance around it; because of EMC regulations, such scans are often mandatory before a product is approved for sale. With version 2013, CST STUDIO SUITE can now simulate cylinder scans automatically in any solver that supports far fields (see Figure 1). This means the EMC compliance of a design can be calculated before the first prototype is built, potentially reducing the number of prototyping stages needed.

Nonlinear materials are a critical part of many devices. To that end, version 2013 includes several innovations to improve the simulation of these complex materials. The transient solver now supports nonlinear frequency-dependent materials, such as Raman and Kerr materials, while the fast eigenmode solver can now handle lossy dielectric materials. The performance of these simulations has also improved, with transient simulations of higher-order lossy and dispersive materials now quicker and more memory-efficient. 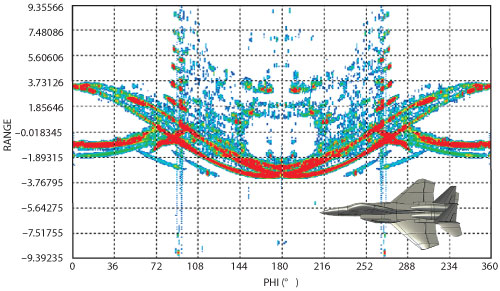 Figure 2 Sinogram of a fighter plane.

CST STUDIO SUITE has long supported radar cross-section (RCS) calculations with the ray-tracing asymptotic solver. Version 2013 increases the utility of this tool further, adding the ability to calculate range profiles and sinograms. A range profile is a dataset showing reflected energy as a function of object depth for a given direction, and a sinogram, as shown in Figure 2, is a 2D image showing the range profiles over a number of incident directions. These help the designer identify which parts of the object produce the most backscatter, and allow users to build up a database of characteristic range profiles to identify objects based on their RCS.

CST STUDIO SUITE 2013 contains innovations at every level of the software, combining a new user-friendly, workflow-oriented user interface with a more powerful back-end and an assortment of new features to extend its capabilities. Together, these advances result in a simulation tool that ties together performance, usability and versatility.