We use cookies to provide you with a better experience. By continuing to browse the site you are agreeing to our use of cookies in accordance with our Privacy Policy.
×
Home » Connect with Confidence: Color-Coded Interconnects

We all know of engineers and technicians who have at times been unsure whether two adapters mated, whether cable assemblies could be connected and what torque wrench to use. With this uncertainty comes an underlying fear of damaging equipment, reducing measurement accuracy and wasting precious time. If only these interconnects, which are so similar, could be easily labeled and identified.

John Bies of Redstone Arsenal certainly did; he lobbied for the establishment of a “standardized method to rapidly identify high frequency coaxial connectors.” His report included a short list of possible results from misidentifying connectors and attempting to mate two incompatible connectors, including damaged equipment, degraded equipment reliability, degraded performance, degraded mission readiness, increased maintenance time, increased maintenance actions and lost efficiency. Additionally, even if two connectors could mate, their operational frequencies might differ, as is the case with mechanically compatible 3.5mm and 2.92mm connectors where the highest common operational frequency may only be 26.5 GHz.

Bies went on to state that the benefits of color-coding high frequency coaxial connectors would include the elimination of damage to equipment, a greater confidence in connector identification and use, a financial saving in training time and costs (he estimated $5.8 million and 5000 man-hours per year in the U.S. military/government agencies alone), an increase in efficiency, reliability and readiness, and an improvement in personnel safety.

An Institute of Electrical and Electronics Engineers (IEEE) Coaxial Connector Rapid ID Working Group was established in June 2008 and a proposed color code scheme was developed in August 2008. The IEEE project authorization request P1802 was submitted for review in January 2009 and approved in May 2009. The working group is now referred to as IEEE P287 with mandate to review the 287-2007 standards for coaxial connectors.  With no other reason than selecting a familiar color scheme known to engineers across the globe, the standard resistor color-code BBROYGBVGW was proposed for high frequency coaxial connectors (increasing resistor value compared to increasing frequency) and is shown in Figure 1.

Maury Microwave has used color bands for more than twenty years to identify 75 Ω Type N connectors, and in 2012 decided to extend its offering with the launch of ColorConnectTM precision adapters, color-coded StabilityTM cable assemblies and
TW-series torque wrenches.

Cable assemblies are used in a wide range of applications and by a user-base with varying degrees of experience and training. As with the adapters, how can one be certain that the cable assembly about to be connected is in fact compatible, and that damage to both the assembly and system will not occur? Listening to its customers, Maury implemented its ColorConnect color-coding to its Stability line of cable assemblies. 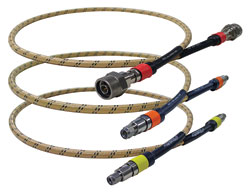 Stability assemblies are offered with 2.92mm connectors to 40 GHz, 3.5mm connectors to 26.5 GHz and Type N connectors to 18 GHz, and have respectable insertion losses of 0.84, 0.67 and 0.54 dB/foot, respectively (at Fmax). Designed specifically for phase- and amplitude-stability, these assemblies offer a typical phase-stability after bending of 5, 3.5 and 2 degrees, respectively, and an amplitude-stability after bending of 0.05, 0.02 and 0.0015 dB, respectively. Phase stability with temperature is less than 4°/m/GHz between –55° and +125°C. Stability achieves a crush resistance of > 260 lb/inch (44 kN/m) by employing additional ruggedizing layers, including a crush protection layer, a braided strength member and braided outer jacket.

The assemblies have a minimum bend radius of 1 in (25.4 mm) making it flexible and versatile. With a flex lifecycle over 20,000, Stability offers one of the lowest cost-of-ownership of most any phase-stable assembly. 2.92mm, 3.5mm and Type N color-coded Stability Cable Assemblies are shown in Figure 3. ColorConnect Precision Adapters and Stability cable assemblies have been specifically designed so that the color identification bands are visible when connected, making identification and verification simple without the need to disconnect any piece of the interconnect chain.

Most, if not all, 5/16"-hex high-frequency connecters look similar from the outside but vary greatly in performance and design. Sub-Miniature version A (SMA) connectors use a polytetrafluoroethylene (PTFE) dielectric which contacts along the mating plane, that along with the  variances in design and construction can cause mating uncertainties and introduce a possible air gap. Because of the possible variances in materials used (i.e., brass versus stainless steel) and the possibility of the thin outer wall (conventional SMA design), it is generally accepted that SMA conectors require a torque value of 5 in-lb in order to limit possible damage.

Other 5/16" hex high-frequency connecters implement an air-dielectric and are named after the diameter of said dielectric; 3.5mm, 2.92mm, 2.4mm and 1.85mm. 3.5mm and 2.92mm employ center pins of equal size and are thereby mechanically mateable, along with the SMA. However, due to the design and specifications of the connector which includes a stronger wall (0.021 inches in the case of the male versions), 8 in-lb torquing is recommended.

With a common 5/16" hex interface, how does one tell the difference between 5 in-lb torque wrenches designed for SMA connectors, and 8 in-lb wrenches designed for the rest? Maury offered a color-coded handle, black for 5 in-lb and blue for 8 in-lb, but it was often confusing to remember which was which. Maury’s new line of TW-series torque wrenches employ color-banded handles, with the 5 in-lb handle striped with a brown band, and the 8 in-lb handle striped with orange, yellow, green and blue stripes, as shown in Figure 4. TW-series wrenches employ a “break” design making it difficult to over-torque a coupled junction. Each torque wrench is factory preset to the proper in-lbs value and have a variance of ± 10 percent. With its high quality, low cost and color code, engineers can match up the paint stripes on the wrench handle with the color bands on the ColorConnect adapters and Stability cable assemblies and be guaranteed a proper torque each and every time.

Color-coded connectors, cable assemblies and torque wrenches give engineers and technicians the confidence that the proper interconnections are being made. No more doubt or concerns about damaging equipment or inaccurate measurements due to mis-matched connections or improper torquing. They reduce costs, improve testing relibility and reduce setup time.