We use cookies to provide you with a better experience. By continuing to browse the site you are agreeing to our use of cookies in accordance with our Privacy Policy.
×
Home » EMC 2012 Wrap Up

Receivers and software dominate the show

IEEE EMC Symposium took place in Pittsburgh, PA this year August 5-10.  Almost everyone I talked with was impressed with Pittsburgh as a revived city and the convention center was first rate.  This symposium is the premier EMC event of the year in the US as people gather from around the world from many industries for this conference and exhibition.  The technical presentations covered a wide variety of topics including EMC measurements, EMI control, computational electromagnetic, signal integrity, high power electromagnetic, EMC management, electromagnetic environments, nanotechnology and the newer topics areas of low frequency EMC, transportation EMC and Smart Grid.  There are also training courses for the novice to the experienced professional given by the top leaders in the field.

Just prior to the show, Microwave Journal announced that we will be partnering with Interference Technology, the leading publication focused on the EMC/EMI community, to expand the focus of the Electronic Design Innovation Conference (EDI CON), which is being organized by the Journal in Beijing (March 12-14, 2013). EDI CON will now include specific technical papers, workshops, panels and exhibitors addressing EMC/EMI, alongside experts discussing RF, Microwave and high-speed digital design issues. 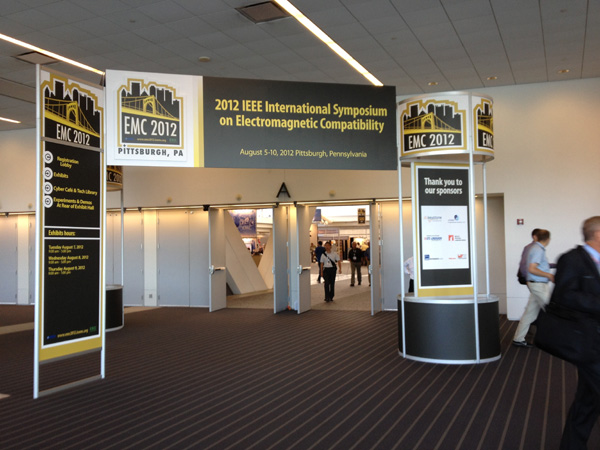 The exhibition included most of the companies in the EMC/EMI industry such as AR, ETS Lindgren, Aeroflex, Ansys, CST, Rohde & Schwarz, TDK, Teseq, Agilent, NEC and others.  The floor included about a hundred companies so the industry was well represented; however, the attendee traffic was limited.  The first day traffic seemed average but the second and third days were very slow.  Here is a full rundown of what the microwave companies were displaying and featuring as we visited as many companies as possible.

2COMU is an EM software and system development company and GEMS is the first commercial EM simulation software package that is based on the VALU and AVX hardware acceleration techniques. As a world record, they used 4,000 CPUs with 90% parallel efficiency to solve one large electromagnetic problem in 2005. They provide optimized turnkey EM simulation systems (parallel EM software, network and hardware combination) to the market.

Aeroflex continues to build on their S-Series product line’s features that include the industry’s widest bandwidth at 200 MHz; level and frequency settling times that are 5X faster than others at 100 μs; and very low phase noise performance (-135 dB/Hz at 1 GHz, 20 kHz offset). Combined with its 4U height and half-rack width, the S-Series is a cost-effective solution with high performance. They also featured their DFS Radar Simulator and Response Analyzer Test Suite is a fully integrated system for testing commercial equipment operating in the 5 GHz to 6 GHz UNII frequency band for compliance to Dynamic Frequency Selection (DFS) specifications, FCC 06-96. The system is comprised of an RF signal generator, capable of simulating defined DFS radar signatures, and an RF signal analyzer uniquely integrated to determine how the equipment under test reacts to the required stimulus.

Agilent was featuring their EMI receiver for EMC compliance testing and the EMI measurement application for pre-compliance tests in addition to the PNA-L for chamber testing. The Agilent MXE is more than a CISPR-compliant EMI receiver—they have also included X-Series signal analysis and graphical measurement tools that make it easy to examine signal details. With these diagnostic capabilities, the MXE helps designers if a device fails compliance testing (see our video demo).

Amphenol RF recently released a new line of rugged connectors designed for various outdoor and harsh environment applications. Developed to withstand corrosion from natural elements and manmade chemicals, the company’s ARC Series is fully submersible and impenetrable to fluids in mated and unmated conditions, even when subjected to extreme changes in temperature and humidity. Units are available in TNC and Type N cable interfaces with standard and reverse polarity options. 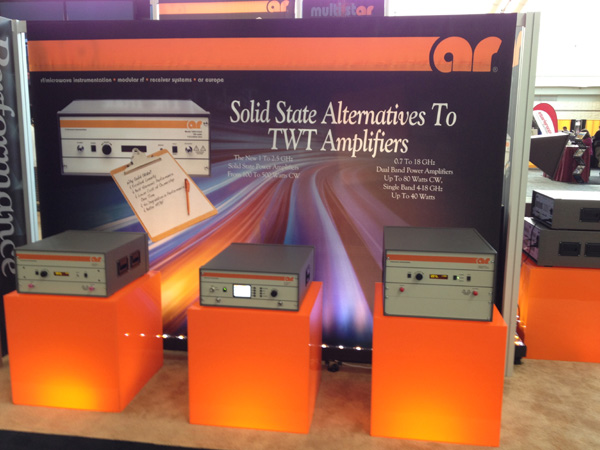 AR is always a premier exhibitor at this show and was front and center in the exhibition hall.  They were featuring many products including their 50 W broadband amplifiers operating from 1 to 6 GHz designed for applications where instantaneous bandwidth, high gain and linearity are required.  They also were showing their MultiStar test system that makes RF radiated immunity testing faster than ever by testing multiple frequencies at once.  It offers up to 10-tone testing for test times up to 10 times faster.  They had a demonstration (see our video demo) using their digital emissions receiver that offers continuous coverage up to 18 GHz with 140 MHz instantaneous bandwidth.  It complies with CISPR-16-1-1 edition 3.0 2012-01.

ARC was featuring their absorber for automotive radar sensors.  They have tested a large number of materials at various frequencies and selected 4 materials that work in the K- and W-Bands.  They have a table on their datasheet outlining the 4 polymers and their properties.  Another interesting offering at their booth was their “Engineer’s Survival Kit” which is a nice sample kit that they provide to customers to try out their products.

CPI manufactures solid state power amplifiers for radar and scientific applications among other products. Their SSPA technology incorporates GaN transistors to fully leverage GaN’s inherent efficiency and high power capabilities. The majority of designs are custom, leveraged off of the standard designs previously demonstrated and life tested to ensure that new amplifier products are highly reliable.

Computer Simulation Technology (CST) was demonstrating their integration and capabilities for cosite interference solutions using Delcross Technologies’ software.  The collaboration between CST and Delcross brings together EMIT's RF system models and predictive engine for quantifying the impact of interference on system performance with the computational electromagnetic solutions of CST STUDIO SUITE. This integration provides a high-fidelity solution for the prediction of cosite interference in complex, RF-dense environments (see our video demo).

FEKO (EM Software and Systems) software uses the Method of Moments and Multi Level Fast Multipole Method allowing the analysis of EMC, antenna design and placement, dielectric bodies and radiation susceptibility of cable harnesses in real-world problems.  They were featuring their cable analysis capabilities along with others and are preparing a new version soon.

Empower was demonstrating their new line of 1 kW power amplifiers operating up to 1 GHz in a compact 5U chassis.  It uses LDMOS solid state devices, has a touch screen interface, built-in test and remote diagnostics and is IP addressable so can be controlled and monitored remotely.  See our video demo of this intriguing system.

ETS Lindgren always is a major presence at this show and had a large booth with many solutions.  A couple that they were featuring included the EMCenter which is a flexible platform for reducing RF test complexity (see our video demo) and their TILE! 6 – Totally Integrated Lab Environment software.  The EMCenter is a 3U high system that includes an integrated microcontroller, touch screen and room for up to 7 mix-or-match plug-in card modules.  Each card module is a specialized RF test instrument for EMC measurement.  The EMCenter can automate test routines and generate all the necessary reports using test management software such as TILE!.  See our video demo of the setup.

A company that I had not talked with before was Gauss Instruments which produces a line of EMI receivers that are 4000x  faster than traditional ones.  They provide real-time analysis to the user in a small package with a selection of frequency ranges. 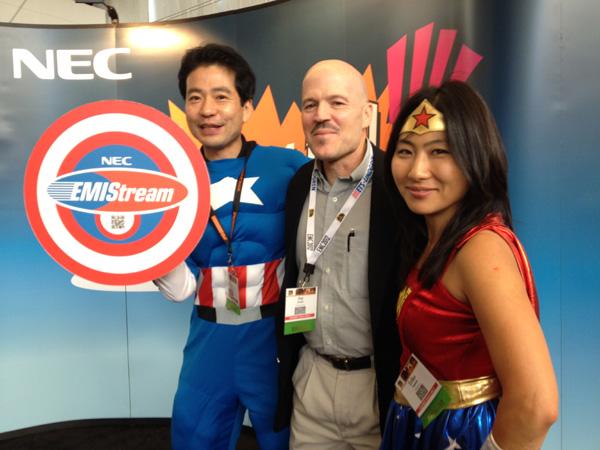 NEC used the super hero theme to get everyone excited about their EMIStream design rule check and plane resonance analysis software.  EMIStream is an EMI design rule check and plane resonance analysis tool that can suppress undesirable EMI generated from PCB layout at an early stage and suggest solutions.  It prevents problems that can be expensive to fix later after the design has been manufactured.

Rohde & Schwarz had a major presence and some significant announcements at the show.  R & S introduced a significant new product, the R&S ESR EMI test receiver whose broadband architecture allows standard-compliant EMI measurements up to 6000 times faster than other solutions. Comprehensive diagnostic tools such as spectrogram display, real-time spectrum analysis and IF analysis help developers detect and eliminate EMI (see our video demo). R&S and Albatross Projects Group, a German supplier of EMC test setups, have globally collaborated for more than 20 years on turnkey solutions and EMC test systems for CISPR, IEC, automotive and military standards.  They announced that R&S will take over the sales of anechoic chambers and shielded rooms from the Albatross Projects Group in the USA and Canada.

TDK was featuring many products in the booth including their new HD color video camera for remote monitoring of equipment under EMC testing.  It features an industry best 30 frames/sec plus low light sensitivity (near zero lux), 20x zoom and EMI shielding greater than 200 V/m to 18 GHz.  They were also featuring their EMI-Lab TDK emissions lab software.

Tektronix was featuring their spectrum analyzers that effectively characterize time-variant signals and solve problems with DPX live RF spectrum display technology. They have performance, mid-range and handheld analyzers ranging up to 20 GHz and up to 100 MHz capture bandwidth.  They can perform real-time triggering on any signal to reduce spur search time. 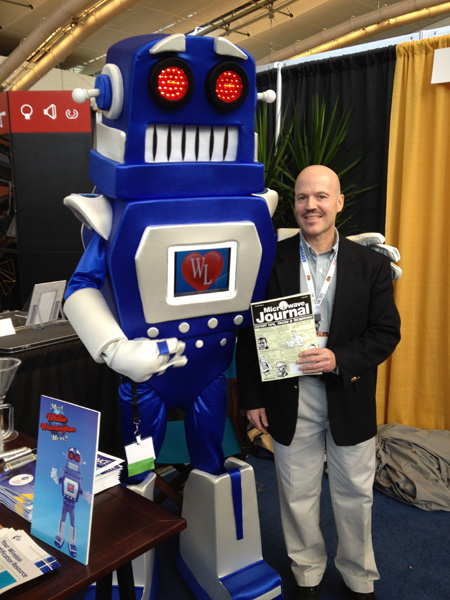 Teseq recently announced plans to acquire Instruments for Industry (IFI) after acquiring MILMEGA.  By combining the competencies of IFI and MILMEGA with its own capabilities, Teseq expands its capabilities and broaden its product line in the RF amplifier market, providing its customers with the best possible solutions in variety of applications including commercial, industrial automotive, military, defense and communications.

Washington Labs had their funny robot, Willie, walking around the show – we got a nice picture together.  They offer a variety of engineering and testing programs and products from compliance testing to design reviews to specialized test services (from consulting to customized seminars).  I was impressed with the number of standards they are able to test and their wide variety of training courses.