We use cookies to provide you with a better experience. By continuing to browse the site you are agreeing to our use of cookies in accordance with our Privacy Policy.
Home » New Thermal Solver for RF Applications
Software/EDA Channel

With its latest release, the EMPIRE XCcel 3D EM solver now features a novel thermal solver for the simulation of the temperature distribution of power electronics, RF circuits and integrated circuits, as well as electromagnetic heating in the human body. The thermal simulation includes thermal conductivities of materials, surface convection and radiation cooling. It also supports heat sources and heat sinks for heating and cooling mechanisms.

With the increased packaging density of RF circuits, heating can become a severe problem for the lifetime of critical components such as diodes (also LEDs), transistors, resistors and ICs. Also passive structures such as filters, couplers or resonators can exhibit high currents in small areas where the temperature can rise to a critical level. Also, with regards to electromagnetic radiation the prediction of thermal heating inside human bodies (e.g. handheld antenna next to a human head) is necessary to prevent hazards.

The accurate prediction of the temperature distribution is now possible with EMPIRE XCcel 6.0. The geometry can be imported or is created within the GUI where properties such as thermal conductivity and heat transfer rates can be entered similarly to electromagnetic properties. A large database is equipped with known parameters and thermal sources can be set directly, e.g. by entering a thermal power in watts for a lumped element such as a transistor. 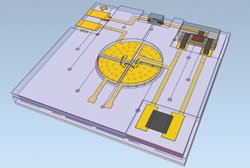 Thermal sources can be determined by an EM simulation, too. With a combined EM and thermal simulation the RF losses are calculated in a first EM simulation run, which will be used as a source for subsequent thermal simulations. Cooling elements can be defined as surfaces with a specific thermal resistivity. In the case of human body thermal modelling, the blood perfusion rate can also be taken into account. In addition, known thermal properties are available in a tissue database.

The simulation engine automatically identifies the surface to air interfaces and invokes the heat transfer mechanisms such as radiation and convection. With this method, cells filled with air do not need to be part of the solution, thus minimizing the number of cells to be simulated for the temperature distribution.

A robust and efficient solver kernel is used for the fast solution of the thermal equations. An adaptive scheme optimizes the over-relaxation factor during the iteration process for maximum simulation speed. After simulation the temperature distribution can be displayed together with the structure. The temperature can be displayed as distinct planes, as maximum or minimum of each plane or as top and bottom temperature distribution. The latter is especially intended for comparison with infrared camera images. 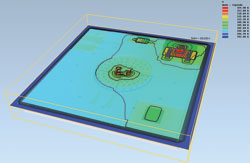 As an application example, Figure 1 shows an LTCC module which has been developed in a joint project of German companies: odelo LED GmbH, IGOS GmbH and IMST GmbH. It contains three LED chips on top which are die-bonded and wire-bonded to the top metallization. A small driver circuit with a Schottky diode, transistor and resistor is also placed on top. Many thermal vias are integrated beneath the active elements to transfer the heat from the top to the heatsink at the bottom. In this case the power loss is known and entered as lumped and distributed heat sources.

Figure 2 shows the temperature distribution of the top obtained with EMPIRE XCcel 6.0. The module is subdivided into 10.3 million cells and an accuracy of 0.6 mK has been obtained after 2700 iterations. The simulation time needed is about three minutes on a notebook with Intel Core i7-2620M CPU at 2.7 GHz. For this size the memory requirement is about 1 GB. The temperature rise is about
40ºK above ambient temperature with the maximum inside the transistor package. As can be seen a temperature distribution for a complex structure is obtained with the EMPIRE XCcel 6.0, which provides valuable input for the thermal design.

The new EMPIRE XCcel 6.0 3D EM solver has been designed to cover nearly all today’s design challenges for RF designers, like antennas, passive circuits, packages, waveguides or EMC/EMI problems including thermal examination of the human body. The new thermal solver has also been optimized with respect to solution speed thus giving reliable results within the minimum solution time.