We use cookies to provide you with a better experience. By continuing to browse the site you are agreeing to our use of cookies in accordance with our Privacy Policy.
Home » Signal Generators Provide Perfect and Precisely Imperfect Signals 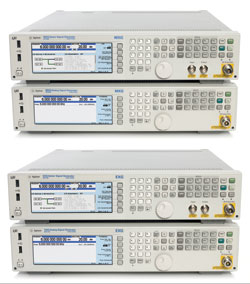 RF technology marches on at a furious rate, whether it is for wireless communications, aerospace/defense, or ever-faster wireless networking applications. Test equipment performance and capabilities have been driven forward at a similar pace. Interestingly, one of the more remarkable developments in Agilent’s new X-Series RF signal generators is unique technology that provides "precisely impaired" signals. Available in analog and vector modulation models – from the pure and precise MXG to the cost-effective EXG – these new instruments provide both perfect and precisely imperfect signals.

Development of new RF technologies depends on test equipment that pushes the performance envelope. A prime example of this is the MXG, which is now setting new standards in phase noise and spurious performance, signal purity, modulation bandwidth and output power. The MXG uses a new triple-loop synthesizer design that leverages Agilent’s own fractional-N ASIC to achieve industry-leading phase noise and spurious performance. As shown in Figure 1, several levels of optional phase noise performance are available to optimize price/performance for different applications. At 1 GHz and a 20 kHz offset, the standard MXG unit has a phase noise of -134 dBc/Hz. When options UNX/UNY are employed, phase noise improves to -146 dBc/Hz. Spurious performance from the multi-loop implementation is -96 dBc/Hz (all figures typical).

The synthesizer architecture pays similar dividends in terms of broadband noise, being reduced to -163 dBc/Hz at 1 GHz for both the MXG and the new cost effective EXG. All of these specifications are improved by 10 dB or more from Agilent’s previous generation ESG signal generators. Other measures of signal purity have also improved. ACPR, for example, is as good as -73 dBc for W-CDMA (TM1, 64 DPCH).  This signal purity is achieved without a loss of frequency agility. Switching speed for all X-Series signal generators is now specified at better than 900 ms in list sweep mode.

Coupled with the signal purity of the new X-Series signal generators is their availability to deliver power. For applications such as amplifier test, pure signals must be supplied at high power levels to exercise and quantify nonlinearities such as harmonics, intermodulation and compression. To help engineers avoid the expense and inconvenience of external amplifiers, the MXG specifies an industry leading +24 dBm (27 dBm typical) to 3 GHz and +19 dBm to 5 GHz. This combination of power and purity is made possible by Agilent’s own low-loss pin diode electronic attenuators that also offer extended life and reliability in manufacturing environments where they may be cycled very frequently.

A New Standard for Modulation Accuracy and Wide Bandwidth

Data rates for mobile communications and wireless networking continue to rise rapidly, leading to a combination of dense constellations and wide modulation bandwidths. The IEEE 802.11ac standard is a prime example, promising gigabit speeds through the use of 256QAM modulation at bandwidths up to 160 MHz. The MXG uses advanced modulator circuits and innovative calibration techniques to overcome the I/Q and frequency response problems that generally worsen with increasing bandwidth. The result is a modulated signal that removes any doubt about the source or magnitude of a system’s modulation error.

Pushing technology to the next level often rules out the use of off-the-shelf ASICs. The IQ modulator in the vector MXG and EXG models prove this fact. Developed and manufactured by Agilent, it sits at the core of a modulation section that delivers industry leading ACPR over bandwidths as wide as 160 MHz internally, and up to 300 MHz from external sources. This modulation section is linearized by an internal calibration source and algorithm that provides vector correction factors to a real-time baseband processor. The result is an 802.11ac 256QAM error vector magnitude (EVM) of 0.4 percent (typical) over 160 MHz in the MXG and 80 MHz in the EXG.

Built-in channel calibrations also provide full vector correction from the modulator through RF output. This ensures a high dynamic range and flatness of ±0.2 dB across the MXG’s 160 MHz bandwidth and EXG’s 120 MHz bandwidth. Moreover, no user intervention (e.g., manual IQ adjustment) is required. Wide modulation bandwidth and high dynamic range provide user benefits even when individual signals are narrower. The crowded nature of today’s spectral environment means that receivers must cope with problems such as adjacent channel interference and multiple types of blocking. A modern smartphone, for example, can have three or more transceivers operating at the same time, and often operates close to other similarly complex devices. The X-Series’ wide bandwidth modulator can produce a test signal composed of a complete spectral segment, including the desired signal plus adjacent and alternate channels as potential interferers, and perhaps spurious or transient signals as well.

Both real-time baseband generation and arb playback memory approaches have advantages in creating modulated signals; some applications are better satisfied by one approach than the other. The MXG and EXG vector models combine these baseband generators in one unit, ensuring the best approach is always available to the user.

The real-time baseband generator and its processor-accelerator support a large number of applications in cellular communications, wireless networking, audio/video broadcasting and navigation (e.g., GPS and GLONASS). Real-time modes also include custom or flexible modulation types, including dense constellations up to 1024QAM.  The real-time mode allows for creation of complex signal scenarios with very long durations. For satellite navigation, the MXG and EXG can generate signals representing up to 32 line-of-sight GPS/GLONASS satellites, including real-time control of satellite visibility and power for up to 24 hours without repeating. 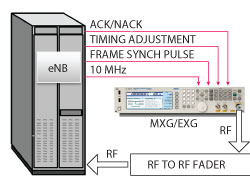 The feedback loops in mobile wireless systems also benefit from real-time generation, where closed-loop testing is used to evaluate the throughput of real-world channels. An example configuration is shown inFigure 2. In testing such as LTE HARQ, the X-Series signal generators can receive TTL-level feedback signals and reconfigure the transmission signal while maintaining the link. This enables more realistic testing of throughput over impaired channels.

The other mode available in the X-Series is an extremely deep arb memory. Playback of baseband data from a deep arb memory is a flexible way to generate many different signal types at RF. The signals for the arb memory are typically generated by a PC program, such as Agilent’s Signal Studio, that is available for many wireless, video and navigation standards like LTE, W-CDMA, HSPA, 802.11, DVB-T/H, GPS and GLONASS. The MXG and EXG provide up to 1 GSample and 512 MSamples of memory, respectively, for a capability that exceeds conformance requirements and can, in some cases, offer an alternative to real-time signal generation.

Real-time vector signal processing can modify or predistort signals to correct for system or channel problems, but can also be used to selectively degrade signals. While the typical purpose of a signal generator is to provide a clean stimulus or reference, they are also vital in testing a system’s response to representative impairments.

The low phase noise of the MXG is not a benefit in all cases. Real-world systems must deal with phase noise in both continuous wave (CW) and modulated signals. Therefore, the ability of a signal generator to act as an adjustable and accurate substitute can shorten development time and reduce the chances (and resulting costs) of under- or over-performance. In the MXG, a real-time signal-processing ASIC customizes phase noise levels for both CW and modulated signals. In an important innovation, phase noise can be adjusted to different levels at different offsets, including the steep slopes of close-in noise, the flat slopes of synthesizer pedestal noise and the shallow slopes of wide offset noise.

The total cost-of-test, especially over time, is far more complicated than the equipment cost. The X-Series signal generators were designed to minimize costs over their entire life cycle in real-world manufacturing. They begin by offering a range of choices to optimize performance, capability and cost.

Multiple MXG and EXG models include both moderate- and high-performance generators with analog and vector capabilities, and different frequency coverage to match application needs. This flexibility supports agile manufacturing, where the flexible options and application software structure allow signal generators to be re-purposed to remain productive over a longer life.

Once in place, the ideal signal generator does its job forever with a minimum of attention. The low-loss, solid-state attenuators of the EXG/MXG make countless amplitude changes without wear, contributing to a three-year instrument calibration cycle. Unproductive downtime is minimized with self diagnostics, a refurbished assembly exchange program, and an innovative hardware design that requires no post-repair calibration or adjustment.

RF technology may be marching on at a furious rate, but the performance and capabilities of the new X-Series signal generators are definitely keeping pace. By pushing the envelope on performance, functionality and cost, they are now providing engineers with better choices for both design and manufacturing.