We use cookies to provide you with a better experience. By continuing to browse the site you are agreeing to our use of cookies in accordance with our Privacy Policy.
Home » Drive Test Software Offers Complete LTE MIMO Measurements 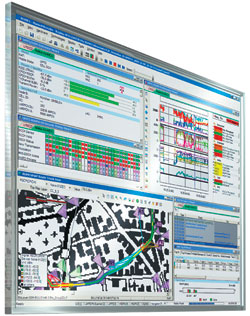 Network operators want to take full advantage of new and existing resources when they upgrade to LTE, and MIMO technology can increase the capacity of LTE networks. Rohde & Schwarz has added MIMO-specific measurements to its R&S ROMES4.65 drive test software, enabling network operators and infrastructure manufacturers to collect important MIMO data during a drive test. Such data can be essential in determining where an investment in MIMO would pay off in their coverage area and where MIMO can be implemented smoothly and efficiently. 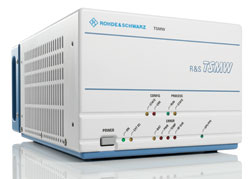 When used with the R&S TSMW network scanner (shown in Figure 1) with its two integrated receivers, the R&S ROMES software can measure the MIMO channel matrix for 2×2 systems. The output is basically the channel matrix with complex values, namely amplitude and phase. This measurement needs to be done by each terminal using MIMO. Out of the channel matrix a Singular-Value-Decomposition is calculated, which are known as Singular Values, and these are used to obtain the Condition Number (CN). 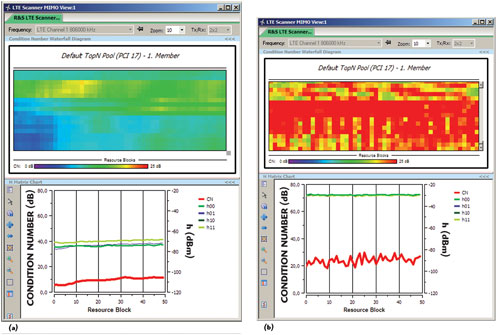 As well as the condition number, the full MIMO performance also depends on the signal to interference plus-noise ratio (SINR) of the signal. Determining the CN and the SINR per Resource Block (per sub-band) brings a better understanding of the whole LTE-MIMO channel. Interference, fading, multipath, antenna correlation and noise can be the reasons to degrade MIMO performance.

To evaluate the MIMO performance, R&S ROMES4.65 software calculates the data that indicates the capacity gain that can be achieved with MIMO. A GPS receiver assigns this data to the exact position and clearly displays it on a map, as shown in Figure 3. The software performs MIMO measurements on all bandwidths up to 20 MHz and interference can be detected over the entire bandwidth used by the LTE signal. 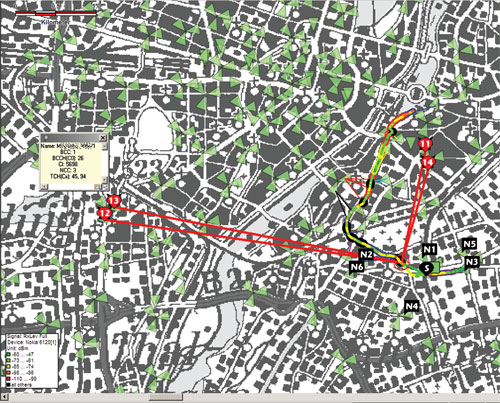 Figure 3 Map showing the position of the interference (dotted line), the cell currently providing coverage (S) and the four interfering cells (11, 12, 13 and 14). N1 and N2 are the current neighboring cells and the color of the route indicates the received signal strength of the GSM mobile phone.

LTE is a single frequency network (SFN) that is identified by a reuse factor of 1, which means that neighboring cells use the same frequency ranges. Interference is therefore especially frequent and must be analyzed to avoid capacity losses. The R&S TSMW network scanner was developed specially for this task and features a C/I value of -20 dB. Therefore, even interference signals that are 20 dB weaker than the strongest signal can be measured, which makes it possible to identify the interferers and to reduce them.

The network scanner can also distinguish between signals that have the same physical cell ID but come from different eNodeBs. There is no difference whether the measurement is performed in the FDD mode or in the TDD mode. Furthermore, the R&S TSMW combined with the R&S ROMES drive test software not only covers LTE but also UMTS, GSM and CDMA standards, meaning that network operators can test all their mobile radio networks with a single instrument. The R&S TSMW supports all frequencies from 30 MHz to 6 GHz, offering a test solution that covers existing and future frequency bands, making it a cost-effective investment for today and tomorrow.