We use cookies to provide you with a better experience. By continuing to browse the site you are agreeing to our use of cookies in accordance with our Privacy Policy.
×
Home » Blogs » Pat Hindle, MWJ Editor » Continuous Blood Pressure Measurement with Wearable mmWave Device Takes a Step Forward

We first discovered Blumio a little over a year ago in one of our podcasts about interesting IoT applications as the company is using Infineon’s 60 GHz radar chip to continuously measure blood pressure in various locations on the body like the radial artery on the wrist. The goal is to integrate the sensor into various arm or wrist bands for beat-to-beat measurement of blood pressure which could be in the form of a smart watch or similar in the future. It would actively monitor blood pressure and predict problems before they happen which could be done through transmitting that data in real time to appropriate devices for monitoring and analysis. Blumio plans to only provide the sensor and work with partners to integrate it into various platforms for different applications. 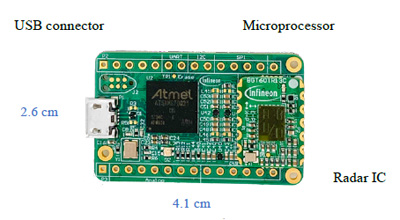 Blumio just published the results of their latest trial of 120 volunteers and the results look promising. In the study, a developmental stage FMCW radar sensor was used for making the measurements. The device features built in antennas and a fully integrated FMCW system operating in the 57 to 63 GHz band. A wearable enclosure was fabricated to house the PCB to allow the sensor to be positioned 3 mm above the radial artery and a software interface for reading data from the PCB was created.