We use cookies to provide you with a better experience. By continuing to browse the site you are agreeing to our use of cookies in accordance with our Privacy Policy.
×
Home » Blogs » David Vye, MWJ Editor » Industry Hardware Gets 15 Minutes of Fame

Industry Hardware Gets 15 Minutes of Fame

David Vye
No Comments
I get that this is entertainment and not real news, so please indulge my little rant, which is meant for your entertainment.

My "exposure" to the daily television show GMA (Good Morning America) occurs as a captive viewer stuck on a treadmill at the local gym. With no access to the TV controls, getting in shape usually means turning a little piece of my brain into mush on those days. Between the steady diet of "mind-numbing repetition of that day's big story with little depth or insight" or the "day after day reporting of nothing new in some long-drawn out soap-opera trial for some grizzly murder", it is hard for me to say great things about the programming of this or other similar shows. But the kicker for me is the health alert. You know the one. This segment warns the viewer that what you don’t know about some commonly found object, food/drink or activity could harm you and your family.

As mentioned, I’m just a captive audience on a treadmill. My intake is purely visual, no audio. And so what gets burned into my consciousness is the message suspended on the lower portion of the TV screen during the segment that is responsible for today’s rant, which reads, “Health Alert: Cell Phone Cancer Alarm, Rating your Radiation Levels”. Well that doesn’t look good. And I wonder, do most people understand the difference between non-ionizing microwave radiation and X-ray radiation? If you’ve ever watched the hilarious Jay Leno interviews with the average person on the street, it is hard to believe that they do. Certainly the appearance of the words “Cancer” and “radiation” next to each other doesn’t help clarify the distinction. 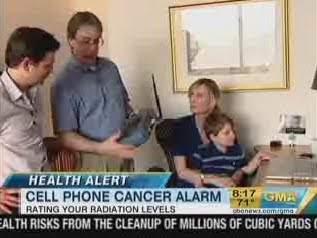 
This recent broadcast was a follow up to a statement from the World Health Organization this month that people should be “more cautious about how much we use our cell phones due to concerns about a link to brain cancer”. Wait, back-up. What statement? What was the link? What was the method used to determine a link? Could you explain/quantify “more cautious”? Not in this segment.

Here’s a little background on the WHO report, courtesy of CNN.

A team of 31 scientists from 14 countries, including the United States, made the decision after reviewing peer-reviewed studies on cell phone safety. The team found enough evidence to categorize personal exposure as "possibly carcinogenic to humans."

What that means is they found some evidence of increase in glioma and acoustic neuroma brain cancer for mobile phone users, but have not been able to draw conclusions for other types of cancers. "The biggest problem we have is that we know most environmental factors take several decades of exposure before we really see the consequences," said Dr. Keith Black, chairman of neurology at Cedars-Sinai Medical Center in Los Angeles.

"What microwave radiation does in most simplistic terms is similar to what happens to food in microwaves, essentially cooking the brain," Black said. "So in addition to leading to a development of cancer and tumors, there could be a whole host of other effects like cognitive memory function, since the memory temporal lobes are where we hold our cell phones." In February, a study by researchers at the National Institutes of Health, revealed radiation emitted after just 50 minutes on a mobile phone increases the activity in brain cells. The effects of brain activity being artificially stimulated are still unknown.

Wireless industry responded to the announcement saying it "does not mean cell phones cause cancer." CTIA-The Wireless Association added that WHO researchers "did not conduct any new research, but rather reviewed published studies."

"When you look at cancer development -- particularly brain cancer -- it takes a long time to develop. I think it is a good idea to give the public some sort of warning that long-term exposure to radiation from your cell phone could possibly cause cancer," said Dr. Henry Lai, research professor in bioengineering at University of Washington who has studied radiation for more than 30 years.

Results from the largest international study on cell phones and cancer was released in 2010. It showed participants in the study who used a cell phone for 10 years or more had doubled the rate of brain glioma, a type of tumor. To date, there have been no long-term studies on the effects of cell phone usage among children.

"Children's skulls and scalps are thinner. So the radiation can penetrate deeper into the brain of children and young adults. Their cells are at a dividing faster rate, so the impact of radiation can be much larger." said Black of Cedars-Sinai Medical Center. Of course, I rarely see children hold a phone up to their head, nobody can text that way.

Back to the GMA segment where electrical engineering associate professor, Dr. Michael Knox from NYU Polytechnic University (winner of the 2011 Distinguished Teacher Award) has been recruited to monitor the RF energy in a typical American home (husband, wife, 2 kids, 5 cell phones, Wi-Fi and microwave oven) using the N9340B Handheld Spectrum Analyzer from Agilent Technologies. I had to chuckle as the anchor described how the family allowed ABC to invade their home with a “Big machine that measures radiation”. Maybe I’ve seen too many handheld spectrum analyzers at various trade shows, but that one doesn’t look so big to me. In fact it looks kind of cute. Congratulations on making prime time TV, Agilent.

As Dr. Knox roamed the house (interrupting dinner time) with a “fancy machine that measures radio waves” aka spectrum analyzer, the family got a visual glimpse of the radio activity from their cell phones, Wi-Fi and microwave oven. While Agilent’s spectrum analyzer performed flawlessly detecting the RF signals from each, I’m not convinced the information meant anything to the on looking, non-technical family. I have to imagine the same was true for the majority of the TV audience paying attention. Nice try GMA. I wonder what’s on The Today Show?