We use cookies to provide you with a better experience. By continuing to browse the site you are agreeing to our use of cookies in accordance with our Privacy Policy.
Home » Blogs » Gary Lerude, MWJ Technical Editor » MACOM: Yin and Yang

MACOM made two interesting announcements last week: 1) an early warning that the company missed the revenue and earnings guidance for the March quarter and 2) a plan to form a JV with a Chinese company to pursue the 5G market in China.

Not coincidentally, the JV announcement followed the warning within a couple of minutes. If you have to deliver bad news, balance it with some good news.

Blaming an “acute inventory correction that is currently underway among cloud data center customers,” MACOM announced fiscal Q2 revenue will be approximately $121 million, 12 percent below the midpoint of the prior guidance of $134 million to $142 million. Of course, the drop in revenue cascades to margins and earnings: non-GAAP gross margin will be 49 percent versus the 55 to 57 percent guidance, with EPS a loss of $0.18 rather than the $0.04 to $0.12 expected profit.

Included in the above results is an $8 million inventory reserve for excess data center material, reflecting “light backlog and weak market demand.”

“Over the course of the quarter, demand across our cloud data center businesses deteriorated beyond our original forecasts due to the rapid deceleration of this previously high-growth end market. The decline in new orders from cloud service providers caused component inventory levels to grow more than we originally anticipated at many of our transceiver customers.”

Croteau had acknowledged softness in the segment during the Q1 earnings call on 5 February 2019: “Cloud customers' orders have slowed as they burn off inventory and reassess their long-term manufacturing footprint. Some of the smaller module makers look to be exiting the space entirely.”

Despite recognizing the softness, Q2 turned out worse than the company’s guidance. Croteau said he believes the company has seen the bottom of the data center inventory correction, saying in the press release that customer forecasts and market estimates “remain bullish for the second half of the calendar year.”

On Friday, MACOM’s stock price closed 9.5 percent below the closing price on Wednesday, the day prior to the announcement of the earnings miss. 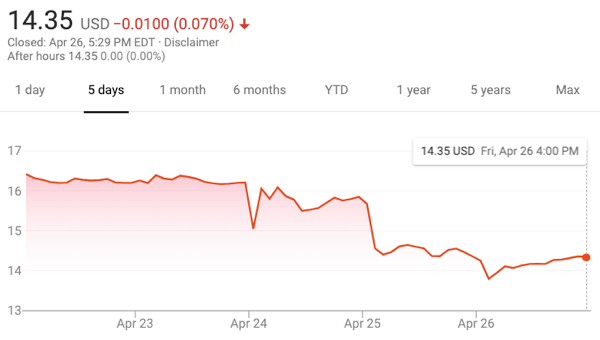 Balancing the financial warning, MACOM also announced it is forming a JV with Chinese component manufacturer Goertek, annointing the JV with exclusive rights to market MACOM’s GaN on Si power amplifiers to the Chinese base station market, including Hong Kong and Macau. Goertek will own 51 percent of the JV, MACOM 49 percent, according to the transaction document.

MACOM gets $30 million up front from Goertek and will contribute $25 million to the JV’s working capital. MACOM will receive royalties and dividends from the venture, amounting to what MACOM says could be $134.6 million in “total consideration.” MACOM did not specify the timeframe for the estimated financial benefit.

The JV requires approval from China’s State Administration for Market Regulation and, with other steps, won’t be in place until sometime during the second half of the year.

Forming a JV is arguably a prudent move for MACOM, an American company relatively unknown in China, birthing a new and largely unproven technology, seeking adoption by Huawei and ZTE for the 5G base stations of China’s three mobile operators. Although Goertek won’t be manufacturing GaN on Si devices, Goertek certainly has the sales channels in China and the guanxi — which just may give MACOM the credibility to gain a significant share of the expected massive massive MIMO power amplifier market in China.

The 5G power amplifier market has attracted all the base station incumbents (e.g., Ampleon, NXP and Sumitomo) and several new players (e.g., MACOM, Qorvo and Wolfspeed), including companies based in China (e.g., Dynax Semiconductor). Conservative infrastructure equipment manufacturers have the choice of LDMOS and GaN, as LDMOS continues to improve its high frequency power and efficiency.

The so-called race to 5G between the U.S. and China is generating news coverage and political discussion. I find that a red herring and this 5G race more relevant and interesting. What will be the share split between LDMOS and GaN, and will MACOM place with GaN on Si?