We use cookies to provide you with a better experience. By continuing to browse the site you are agreeing to our use of cookies in accordance with our Privacy Policy.
×
Home » Authors » Altair Development S.A. (Pty) Ltd.

FEKO, now part of Altair HyperWorks, is available under Altair’s patented on-demand software licensing system.   Users can run multiple HyperWorks applications (including FEKO) and other Altair products for a flat rate, rather than paying for each license in use. As part of Altair’s portfolio, the FEKO version number will jump from FEKO Suite 7.0 to FEKO 14.0 to align with HyperWorks 14.0, the next version of HyperWorks.

The first Altair HyperWorks Units (HWU) enabled version of FEKO is now available on the Altair website. HWU licensing will allow access to many Altair products, including the powerful HyperMesh pre-processor. FEKO Suite 7.0.2 has major runtime and memory improvements for the Ray-Launching Geometrical Optics (RL-GO) solver. This applies specifically to electrically huge problems. 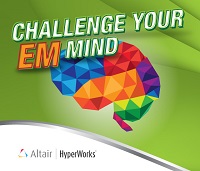 Altair announced that engineering students from across the globe are once again invited to compete in the popular FEKO Student Competition. The competition is open to all under-graduate and post-graduate students who work on a supervised project in the area of electromagnetic engineering and make use of FEKO, Altair's comprehensive electromagnetic (EM) analysis software suite, included in HyperWorks®.

Altair Engineering, a U.S. based engineering company, recently acquired EM Software & Systems-S.A. based in Technopark which sees FEKO, the electromagnetic field analysis software now becoming part of HyperWorks.  With this acquisition Altair will now have a local presence in the South African market, covering all sales and support activities in the region.