We use cookies to provide you with a better experience. By continuing to browse the site you are agreeing to our use of cookies in accordance with our Privacy Policy.
×
Stay Connected :
Home » company

NI, the provider of platform-based systems that enable engineers and scientists to solve the world's greatest engineering challenges, announced that its Board of Directors has elected Alex Davern, age 49, to serve as Chief Executive Officer and President of National Instruments, effective January 1, 2017.

Mini-Circuits announced that Ted Heil, Mini-Circuits vice president and chief operations officer has been appointed as president. He succeeds Harvey Kaylie as the second president in the company’s 46-year history.

With a combined history exceeding 175 years, Dielectric Laboratories (DLI), Novacap, Syfer Technology and Voltronics have come together into a single organisation, Knowles Capacitors. This new entity is a division of Knowles Corp. of USA, an independent publicly traded company. A result of the merging of some of the world’s leading speciality capacitor manufacturers, Knowles Capacitors becomes one team of great people sharing a common vision.

What does it take to make it to 80 years in an industry where today’s technology is obsolete tomorrow? For Indium Corp., it takes foresight and dedication.

Raytheon announces new CEO and Board of Directors member

Raytheon Co. announced that its Board of Directors has elected Dr. Thomas A. Kennedy, age 58, to serve as the chief executive officer of Raytheon Co., effective March 31, 2014. Dr. Kennedy will succeed William H. Swanson, who has served as the CEO of Raytheon Co.since 2003, and who advised the board of his intention to step down from his position as CEO in March, following his 65th birthday next month.

CTT Inc. announces a new family of compact, GaN-based solid-state power amplifiers (SSPAs) operating in the 7 to 11 GHz frequency range for a wide variety of commercial, industrial and military microwave applications. CTT’s latest compact SSPA designs offer as much as 100 watts of output power in a compact package. 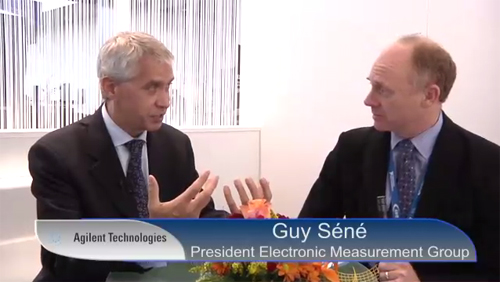 In the first interview about the Agilent spinoff of the Test and Measurement group as a separate company, David Vye, Microwave Journal editor, talks with Guy Séné, president of Agilent's Electronic Measurement Group, about the reasons for the separation and impact on the company.

Laird, a global technology company, announced it will attend European Microwave Week (EuMW), the largest microwave and radio frequency (RF) tradeshow in Europe. Laird will showcase ECCOSORB® and ECCOSTOCK® products and solutions for wireless and satellite communication, military and aerospace, automotive, medical and RFID markets. EuMW will take place October 8 through 10 in Nuremberg, Germany at the Nürnberg Convention Center. Laird will participate in the exhibition portion of the event and exhibit at booth #140.