We use cookies to provide you with a better experience. By continuing to browse the site you are agreeing to our use of cookies in accordance with our Privacy Policy.
×
Home » 6 GHz Instantaneous BW RF Record and Playback System
Aerospace and Defense Channel Test and Measurement Channel 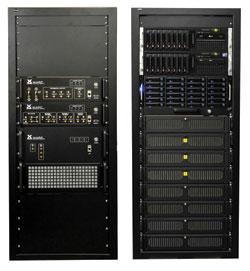 X-COM Systems has developed the Wideband Acquisition Record and Playback (WARP) system that allows the entire frequency spectrum between 4 MHz and 6 GHz to be instantaneously captured and recorded for long periods without loss of a single event. When combined with X-COM’s Spectro-X signal analysis software, it allows the performance of electronic warfare, radar, and wireless communications and satellite communications systems to be comprehensively evaluated.

The WARP system can capture directly from an antenna all activity from the lowest frequencies through C-Band, which includes navigation, AM, FM, shortwave and TV broadcasters, amateur radio, industrial, scientific and medical (ISM) systems, cordless phones, aviation, government and military systems, all commercial wireless networks, WiFi, Bluetooth, GPS, as well as some radar and satellite communications systems. It can also accept downconverted signals from higher frequencies, expanding its range through the millimeter wavelengths used by satellite communications and other military systems.

The WARP system converts captured signals to the digital domain using a 12 Gsample/s analog-to-digital converter (ADC), and stores the data on solid-state media with capacity of up to 32 TBytes that allows 44 minutes of continuous signal capture. This data can then be analyzed with X-COM’s Spectro-X or other software to find signals of interest even when in the presence of much stronger signals or when interferers appear randomly and infrequently.

The system can reconvert the entire 6 GHz bandwidth or only the portion of interest to analog form so it can be used to stimulate a radar, EW, or communications system to evaluate its performance. X-COM’s WaveCAFE software can be used to create custom waveforms that can be incorporated into the data stream. The signal pattern can be rearranged using X-COM’s RF Editor software, which has a user interface similar to that of professional audio or video editing software.