We use cookies to provide you with a better experience. By continuing to browse the site you are agreeing to our use of cookies in accordance with our Privacy Policy.
Home » The Importance of Peak Power Measurements for Radar Systems
Aerospace and Defense Channel

The Importance of Peak Power Measurements for Radar Systems 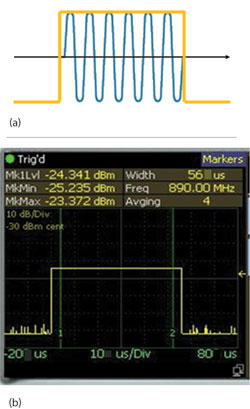 Fig. 1 Drawing of a pulse modulated CW signal in the time domain (a) and power envelope display on a peak power meter (b).

Radar systems are used for military and civilian aviation, weather system tracking and automobile traffic control to name a few. All of these systems have several things in common, including transmitting and receiving reflected RF energy from a distant object to calculate speed, distance and sometimes elevation. These systems are very important for our safety and require accurate power measurement. This article will focus on aviation or ranging type radar that uses bursts, or chirps of pulse modulated waveforms for fine object detail, and has sensitive receivers for low noise measurements.

The commonly understood idea of radar is referred to as primary and is similar to how a bat uses echo location to find a flying insect. A radar transmitter sends out a pulse of radio energy, and a small proportion is reflected back from the surface of the target aircraft to the radar receiver. The stationary primary radar antenna provides the speed and distance of an approaching aircraft, while a rotating antenna dish provides elevation. This passive interrogation does not provide any other identification information. A system developed to gather more information about the target by the military is called the Identification Friend or Foe (IFF) system and is used to distinguish between friendly and enemy aircraft. The Federal Aviation Administration (FAA) or civilian version is the Air Traffic Control Radar (ATCR) Beacon System or the Secondary Surveillance Radar (SSR) System. Both the military and civilian systems rely on a transponder. The transponder is a radio transceiver on board the aircraft that operates in the same frequency band as the primary radar signal and returns a coded message after interrogation from a ground station transmitter. Both the primary and secondary radar signals require accurate power measurement, but using different criteria. One high power and the other is precise power envelope timing.

A primary radar system has a powerful amplifier to transmit pulsed signals long distances coupled with a sensitive receiver to measure the low power return signal. These two parts of the system are not always compatible. The low noise amplifier (LNA) of the receiver can be easily damaged by a few milliwatts of reflected power from nearby objects in the path of the antenna during operation. Output antenna or other load impedance design problems can appear in the initial design stages. Tube type, high power amplifiers commonly used for radar transmitters like the magnetron or TWTA are difficult to control (solid-state power amplifiers are also used in many cases). To operate efficiently, they are designed to work very close to the saturation point and can exhibit nonlinear behavior. This causes the transmitted pulse burst to become distorted and not have a purely rectangular power envelope. These are just a few reasons why accurate power measurement of the radar system is so important.

To understand what power parameters are important to measure for radar, it is necessary to understand what is being measured. Figure 1a is a drawing of a pulse modulated CW signal in the time domain. The blue sinusoid is the voltage waveform or carrier and the yellow rectangle is the demodulated power envelope. Figure 1b is the power envelope on the display of a modern peak power meter. 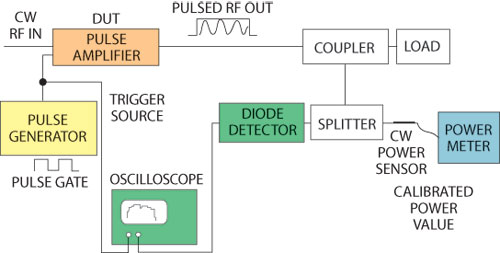 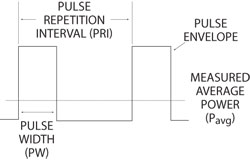 Historically, the power of these radar transmitters was calculated using a system that included a crystal de-tector, oscilloscope and an average-responding thermal power meter. Figure 2 is a block diagram of a diode (crystal) detector system. The CW input signal is connected to the pulse amplifier (DUT) input and pulse gated via the connected generator for a pulsed radar output signal. The signal is passed through a directional coupler to either a dummy load or actual antenna and the diode detector system. The test signal is then split between an average-responding thermal power meter, and a diode (envelope) detector connected to the oscilloscope. The CW power meter will provide an absolute average power measurement, while the scope provides a limited dynamic range pulse envelope shape. The duty cycle is calculated by dividing the power envelope pulse width by the pulse repetition interval. The pulse power is then calculated by dividing the average power value by the duty cycle measurement as shown in the Figure 3. 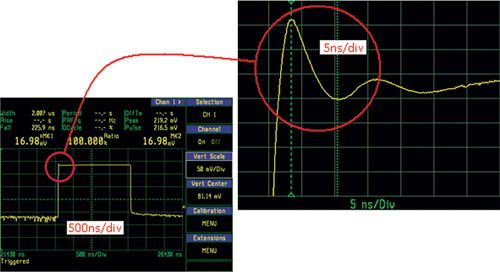 This calculation assumes constant power during the pulse-on interval, a perfectly rectangular pulse envelope and a constant duty cycle. The most important point is the pulse power calculation does not measure the actual peak power value and large power envelope excursions are ignored. Figure 4 is from a Boonton 4540 series peak power meter and illustrates the value of a wide dynamic range peak power measurement. The large video BW and wide dynamic range peak power system can be used to locate pulse anomalies that contain energy not measured with an average-responding thermal power sensor.

The pulse power calculation does not measure pulse waveform anomalies like overshoot and ringing, or slow edge transitions. These distortions can contain sufficient energy to damage sensitive LNA receivers and should not be ignored. Figure 5 shows several examples of distorted pulse shapes.

Primary or search radar is designed to locate objects at a large distance with fine detail. The fine detail requires a short burst or pulse, while the long distance to target requires a long silent period to account for reflected pulse return time. Due to these constraints, the transmitted signal for most search radars has a very low duty cycle. These low duty cycle waveforms occupy a large dynamic range because of high peak to average power ratios. Figure 6 shows a 0.1 percent duty cycle, or P >=> 10 Log (0.001) >=> 30 dBc. This would require a measurement device with at least 10 dB more dynamic range to measure anomalies, or about 40 dB.>

A single-ended detector circuit has uncertainty factors that include a limited dynamic range and a fairly high noise floor. An uncalibrated diode detector has a 20 to 25 dB dynamic range and the output into the oscilloscope varies from directly proportional to power, to nonlinear, to directly proportional to voltage depending upon the absolute power level. This behavior requires a lengthy calibration process that does not account for any temperature variation or a change in carrier frequency limiting its use for measuring the required detail, or high peak to average ratio of a radar signal.

Figure 7 compares a single ended diode detector circuit to a dual diode differential detection circuit. The dual diode circuit is used in modern peak power sensors. The half wave rectified input from the single ended detector does not accurately represent the asymmetrical waveforms and is af-fected by harmonic content. Matching to the RF source becomes difficult due to the parallel effect of the output load impedance. This load is necessary to achieve fast pulse response, and can either be the oscilloscope’s internal 50 Ω termination or an external resistor. A portion of this impedance appears in parallel with the detector’s input termination, which affects the input VSWR. The effect is very small at low input levels, but becomes pronounced at high RF power inputs. 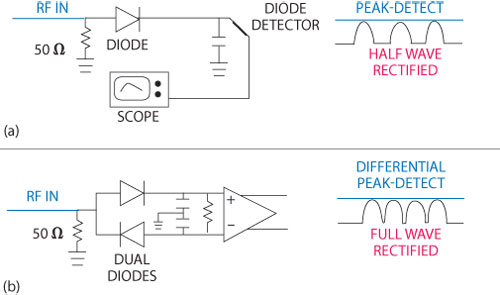 Fig. 7 Comparison of a single ended diode detector circuit (a) and a dual diode differential detection circuit (b). 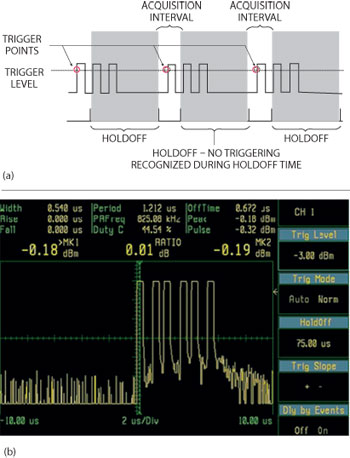 Up to this point, we have not discussed the importance of fast and reliable triggering. To provide precise timing between signals or precise anomaly location, the peak power meter uses an oscilloscope-like hardware trigger. This comparator circuit allows the capture of low nano sec rise time signals and 100 or 200 ps feature placement. Figure 9 is a multiple pulse waveform captured using a positive rising edge trigger with hold-off. The pulse envelope edge stability requires a fast trigger comparator circuit because interpolating between sample data points does not provide the necessary stability for fine feature location. The precise timing relationship between the pulses is captured using fast trigger circuits and is displayed on the peak power meter screen.

Precise timing is important for primary and secondary radar. Many primary radar receivers have a fast responding protection circuit to dump energy via a spark gap system that protects the sensitive front-end LNA from reflected power damage. This system requires accurate measurement of fast rise time signals and precise timing of the protection circuit response during design.

There are several modes of IFF or SSR type secondary radar interrogation schemes and each is identified by the difference in spacing between two transmitter pulses, known as P1 and P3. Each mode produces a different response from the aircraft. A third pulse, P2, in the figure is inserted for side band interference suppression. The Mode A and C interrogation shown in Figure 10 contains the pulse timing diagram and is the same mode in response format.

A Mode-A interrogation elicits a 12-pulse reply, indicating an identity number associated with that aircraft. The 12 data pulses are bracketed by two framing pulses, F1 and F2, shown in Figure 11.

Mode A and C are used to illustrate why precise trigger capability is needed for measuring secondary radar signals and is not the only modulation scheme available for returning additional information about an aircraft. Depending on your requirements, either IFF pulse location to interpret digital information or capturing a fast rising primary envelope edge, a fast responding trigger comparator is a very important feature.

The Importance of Average vs. Peak Performance in Cellular Wireless