We use cookies to provide you with a better experience. By continuing to browse the site you are agreeing to our use of cookies in accordance with our Privacy Policy.
×
Stay Connected :
Home » Online Spotlight: Broadband, Low Profile, Circularly Polarized Microstrip Patch Antenna for WiMAX
Broadband Channel A compact circularly polarized microstrip patch antenna has an irregular hexagonal radiating patch along with two triangular coplanar parasitic patch elements of optimum size and position for WiMAX (3.3 to 3.4 GHz) applications. The two parasitic elements not only increase the resonant bandwidth but also generate circularly polarized radiation. There are no costly and difficult to fabricate slotting, slitting or other complex techniques used. The antenna has an impedance bandwidth of 510 MHz (|S11| = - 10 dB) from 3.07 to 3.58 GHz (15.34 percent) and a circular polarization bandwidth of 120 MHz (axial ratio ≤ 3 dB) from 3.29 to 3.41 GHz (3.58 percent). Its peak gain is 2.3 dB.

A CP antenna must excite two modes of equal amplitude and 90 degrees out of phase.3 This can be achieved with an antenna having two orthogonal excitation feeds.4 The two feeds, however, require two RF power sources or a power divider, which increases the the antenna’s size and complexity. A CP antenna designed with a single feed due to a modified geometry provides the benefits of a low profile and less complexity. 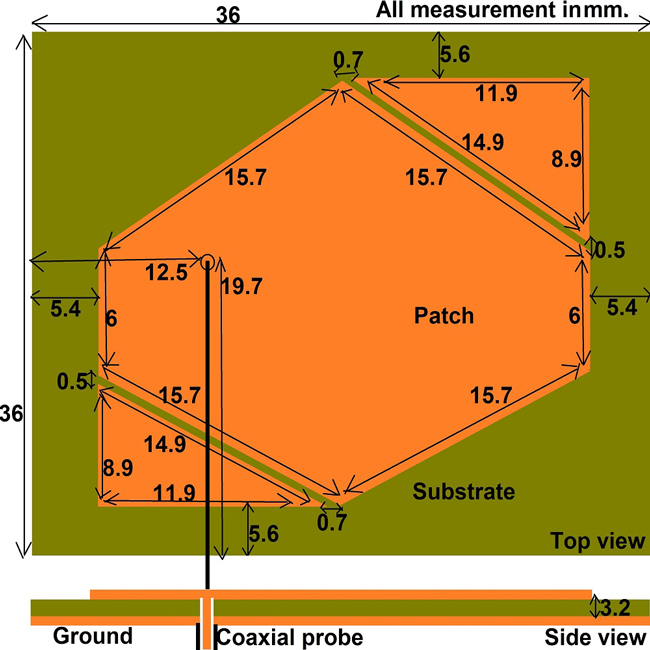 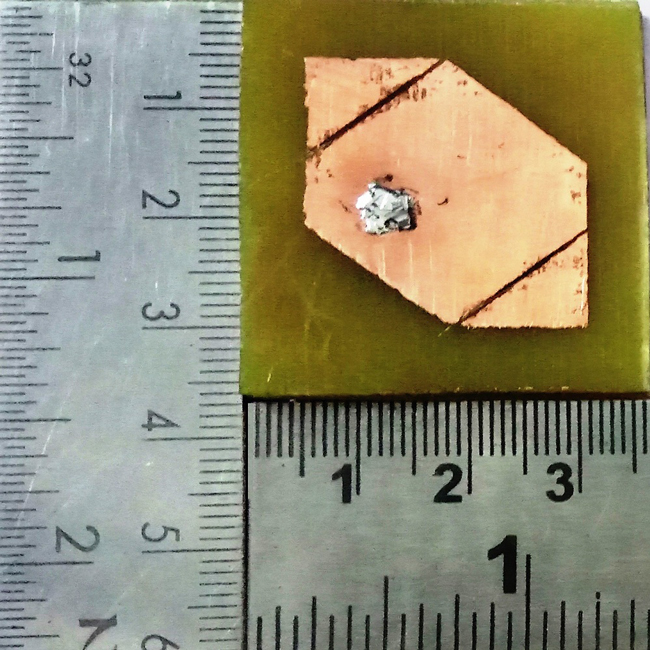 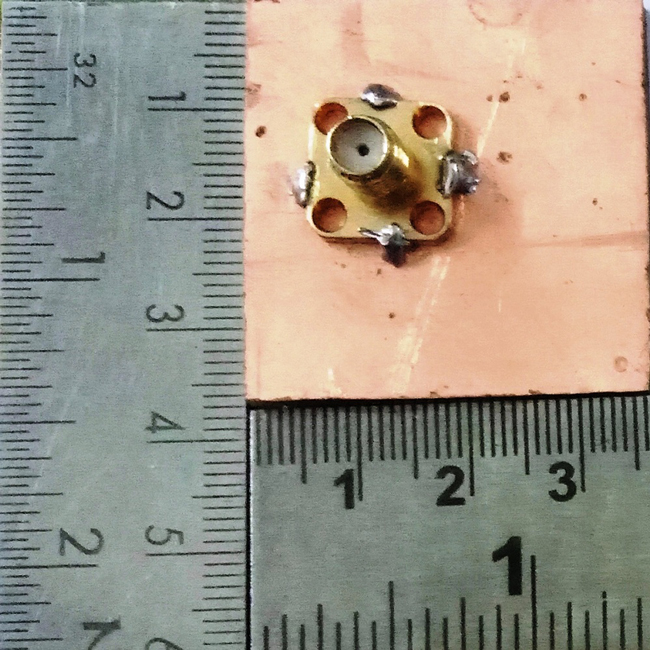 c=Velocity of light in free space.

ɛr=Relative permittivity of the substrate.

ae=Effective radius of the circular patch.

h= Height of the substrate

where s is the side length of the regular hexagonal patch.

After determining 2.93 GHz as the primary resonant frequency of the microstrip antenna with a regularly shaped hexagonal radiating patch having 15.7 mm sides, HFSS software is used for initial design and simulation. The simulation provides a primary resonant frequency band from 2.8 to 3 GHz) for (|S11| ≤ −10 dB) for a 200 MHz bandwidth at a probe position 12.5 mm from left edge and 19.7 mm from bottom edge of the substrate (see Figure 2a, b). 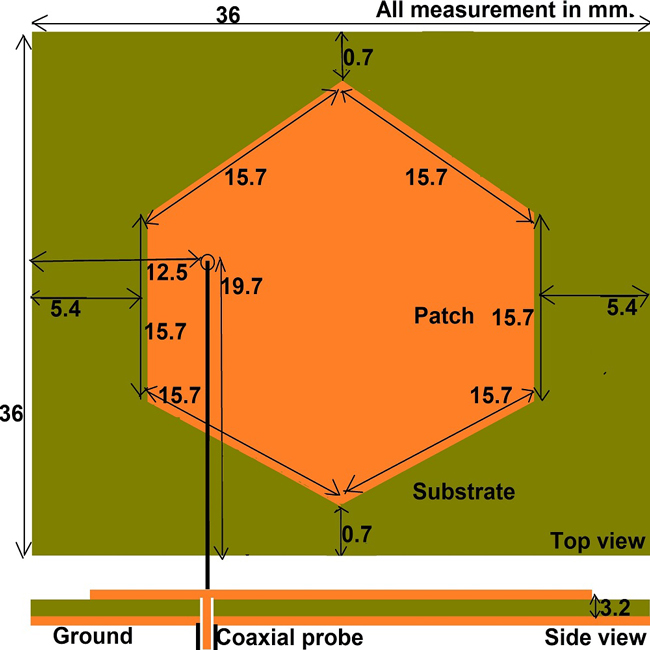 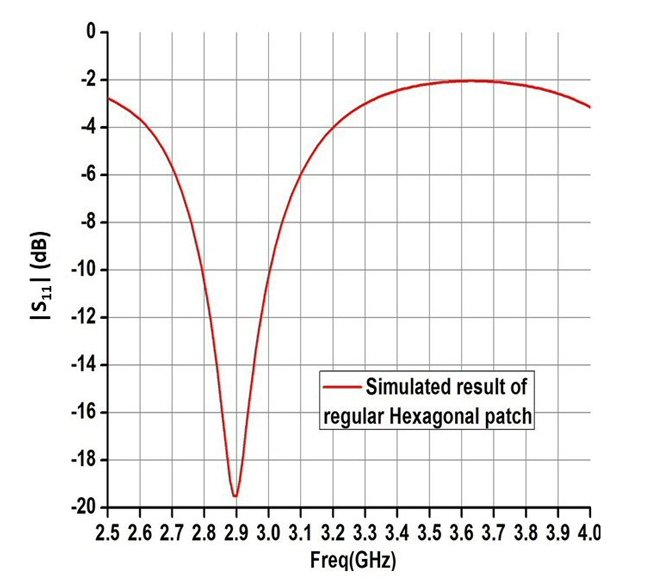 To shift the resonant frequency band higher, the length of the left and right sides of the regular hexagonal patch are reduced by 1 mm at a time continuously with the same probe position and subsequent results are observed. Due to the reduction of the side lengths, the effective resonant length of the patch decreases and the current path length is reduced. This shifts the resonant frequency band higher (see Figure 2c). At 6 mm for both sides of the hexagonal patch, the antenna operating band is 3.18 to 3.42 GHz with an impedance bandwidth of 7.3 percent for (|S11| ≤ −10 dB), which covers the WiMAX band. 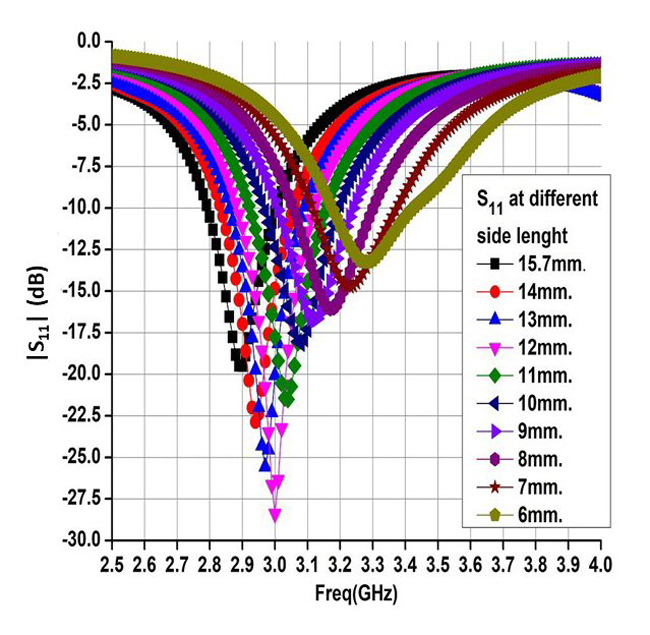 After making the above modifying the initial design, the regular hexagonal patch becomes an irregular hexagon with side lengths of 15.7, 6, 15.7, 15.7, 6 and 15.7 mm (see Figure 2d). This structure can be used as a linearly polarized antenna for the WiMAX band, but it suffers from polarization mismatch losses and multipath distortion. To change the polarization of the antenna from linear to circular while enhancing the impedance bandwidth, two triangular coplanar parasitic elements are incorporated near the top right side and bottom left side of the irregular hexagonal radiating patch (see Figure 1a). 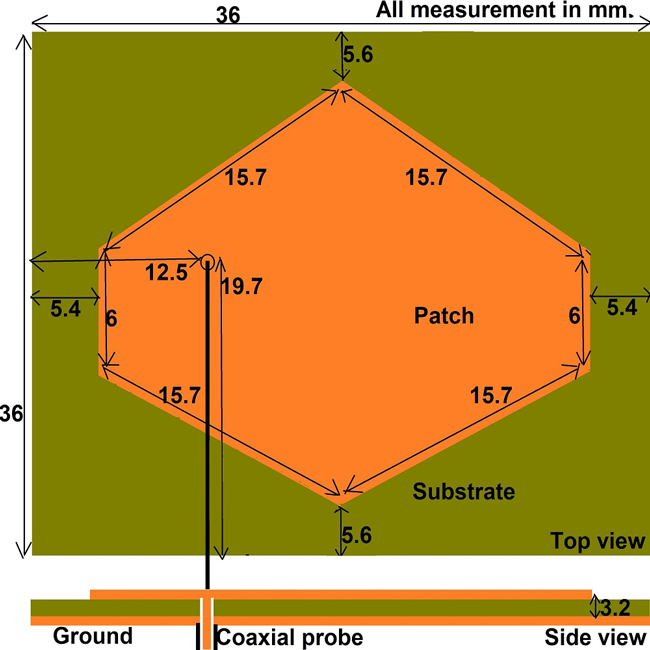 After incorporation of the two triangular parasitic elements, a parametric optimizaion of element position and dimensions is done using HFSS, observing |S11|, axial ratio and input impedance (see Figure 3). Triangular parasitic elements with dimensions 14.9 x 11.9 x 8.9 mm spaced 0.7 and 0.5 mm from the top right side and bottom left side of the irregular hexagonal are determined to be optimum. 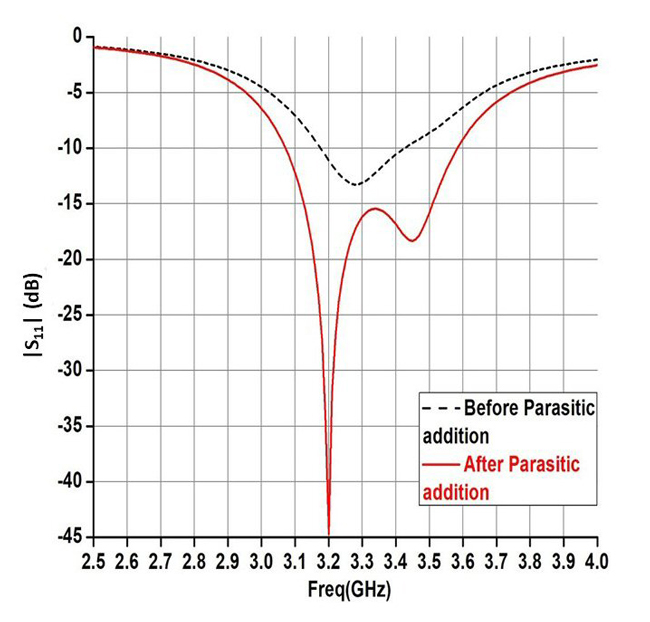 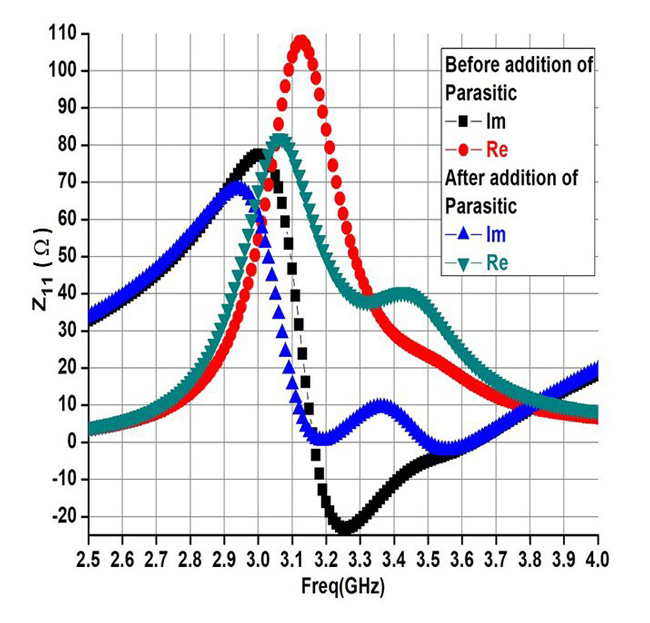 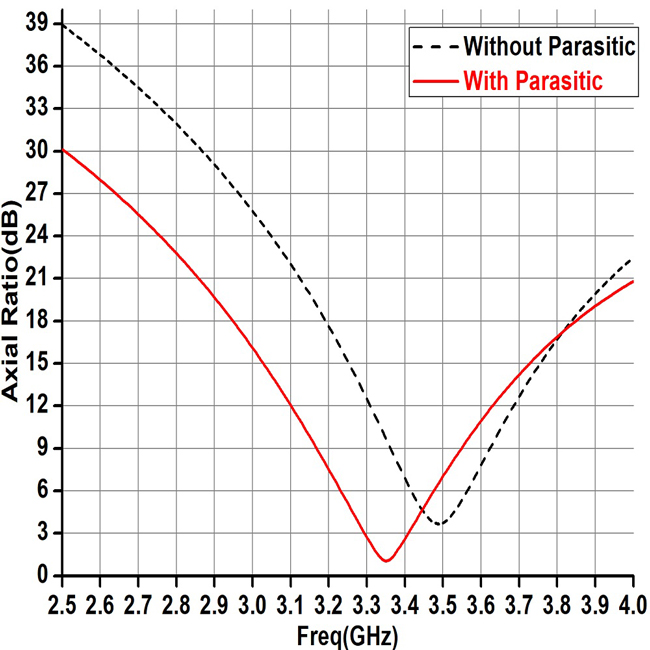 Before the addition of parasitic elements, the modified antenna shown in Figure 2d is linearly polarized, which is evident from the high axial ratio in Figure 3c. After the addition of the parasites elements, the current distribution is altered such that the antenna generates two orthogonal degenerate modes (TM01 and TM10) with the same magnitude. The phase difference between them, however, is not equal to 90 degrees, which is required for CP.

To meet the requirement for orthogonality, the size of the parasitic elements is optimized so that the effective surface current path associated with TM01 mode is slightly greater in one direction, as compared to TM10 mode in another direction. This makes the TM10 mode resonant frequency slightly higher than that of the TM01 mode resonant frequency so that the phase difference between them is 90 degrees. 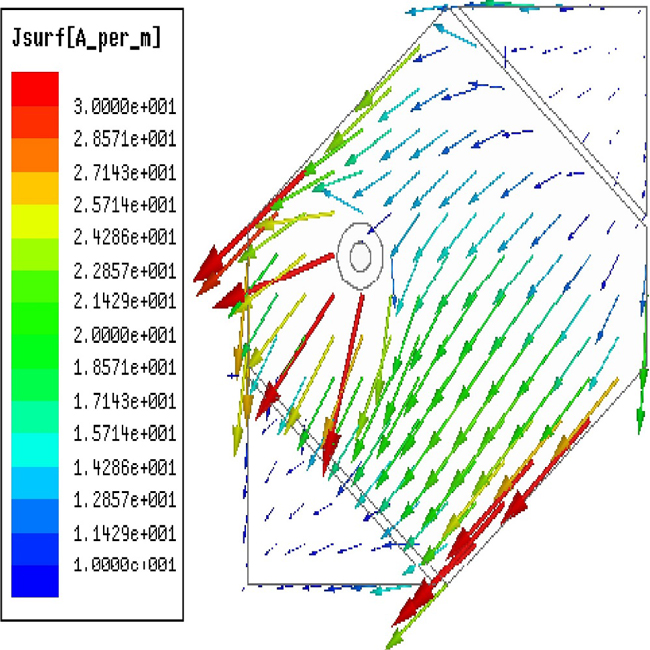 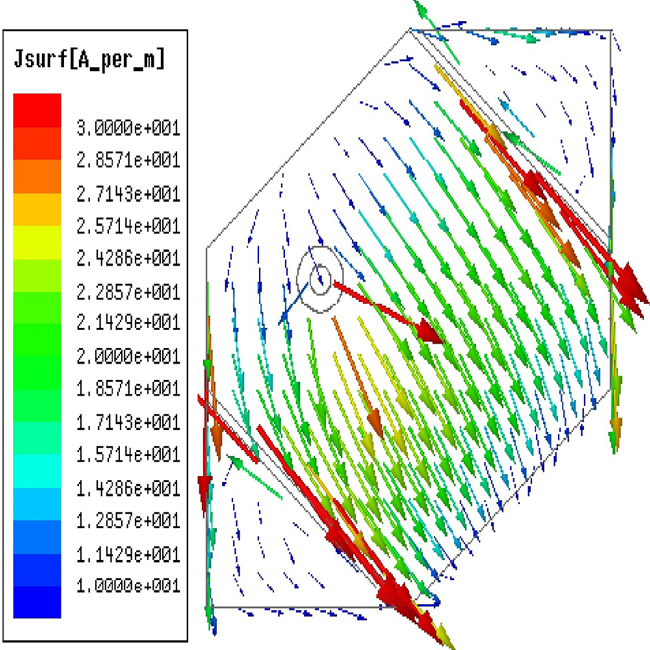 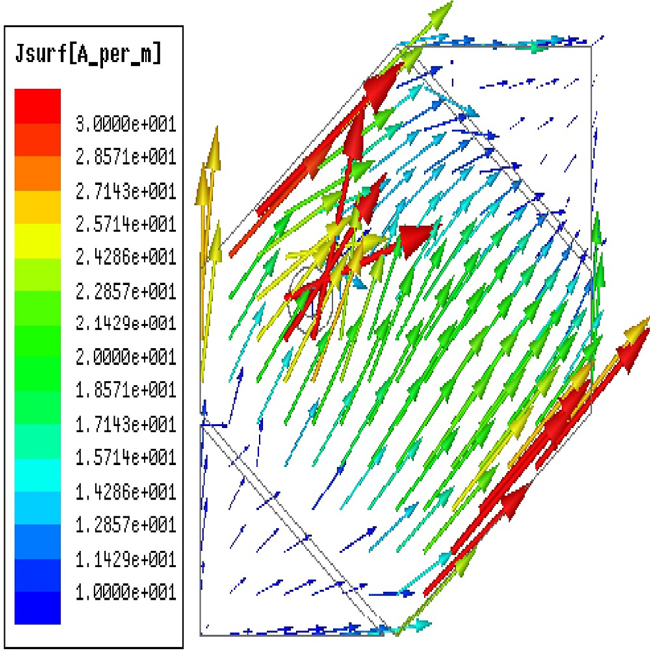 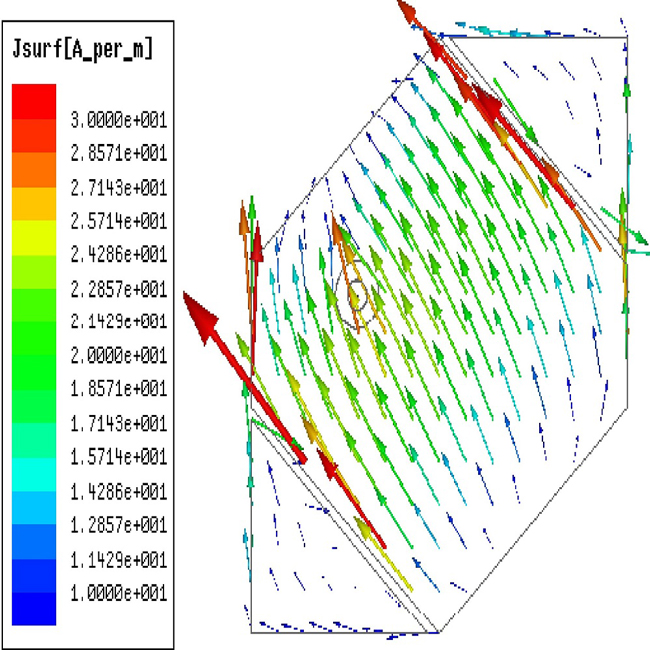 The equivalent circuit model shown in Figure 5 represents the operation of the antenna in Figure 1. The driven hexagonal patch is modeled with two parallel resonators in series. The parasitic triangular patches are modeled as two different RLC resonators coupled to the driven patch through a transformer type mutual coupling mechanism. A comparison of |S11| from the equivalent circuit model with the HFSS simulation shows excellent correlation. 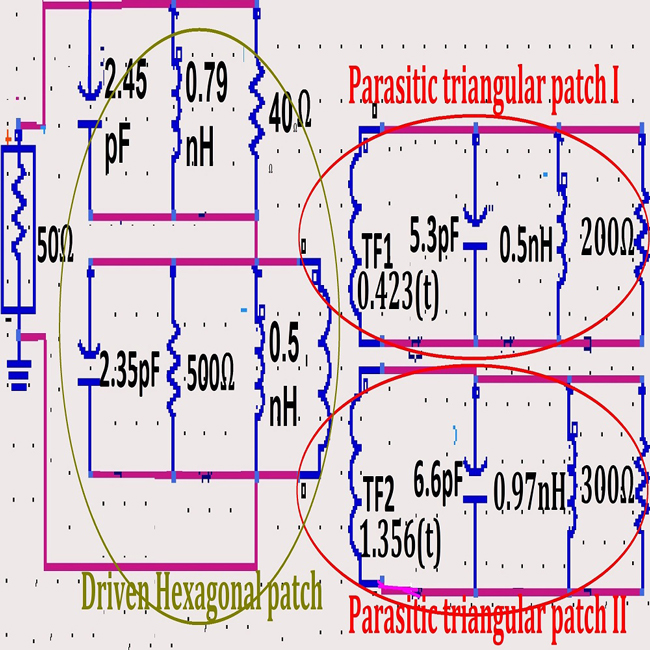 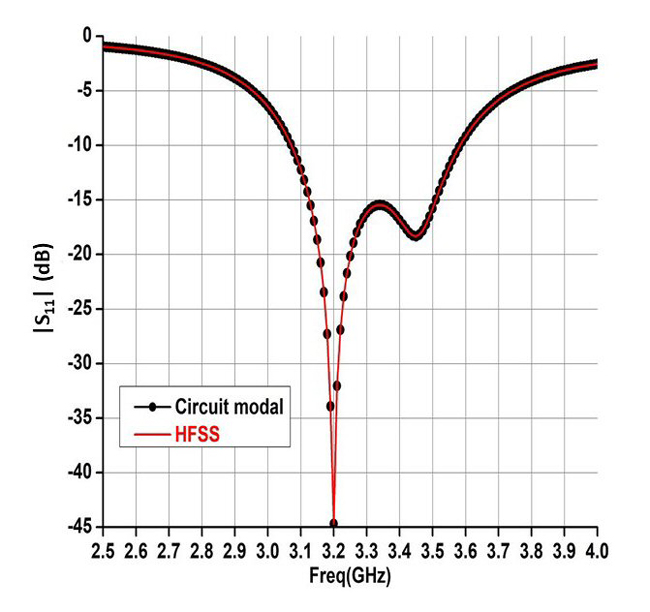 Fig. 5 Antenna equivalent circuit model (a) and comparison of resulting |S11| with HFSS (b).

Measurements of |S11|, radiation patterns, axial ratio, input impedance, gain and radiation efficiency are made on the prototype antenna in Figure 1 using a Keysight E5071B VNA in an anechoic chamber. Simulated and measured results are shown in Table 1. 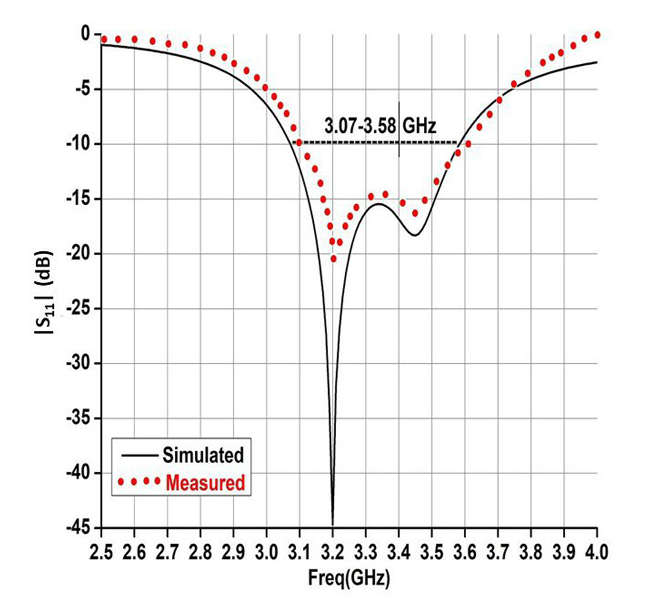 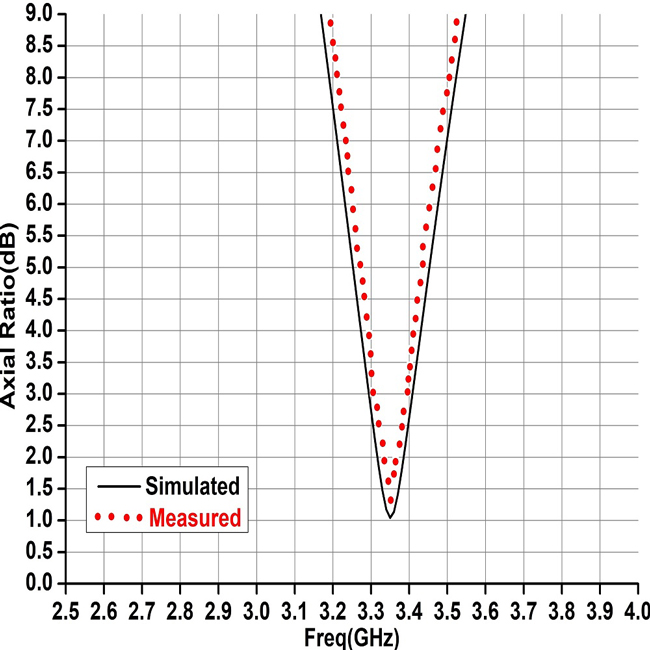 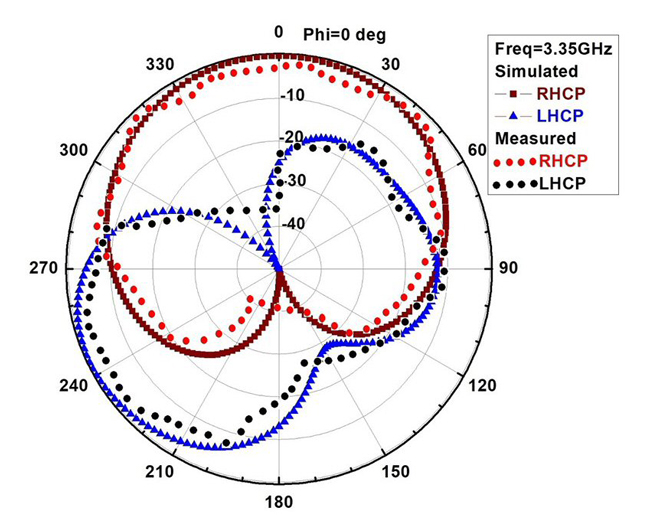 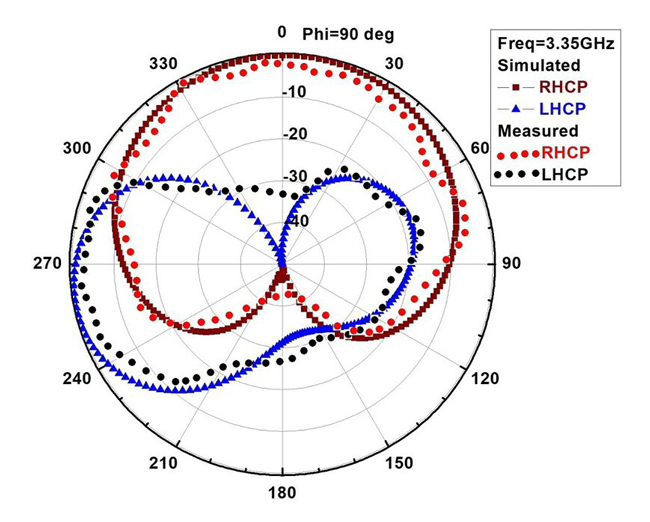 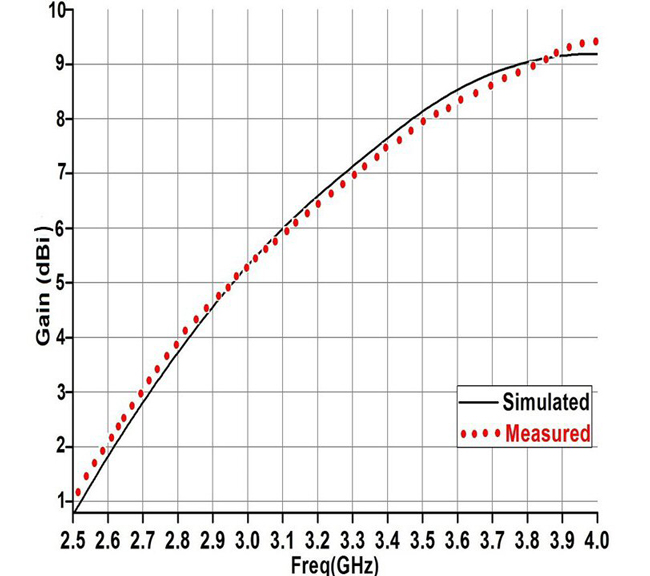 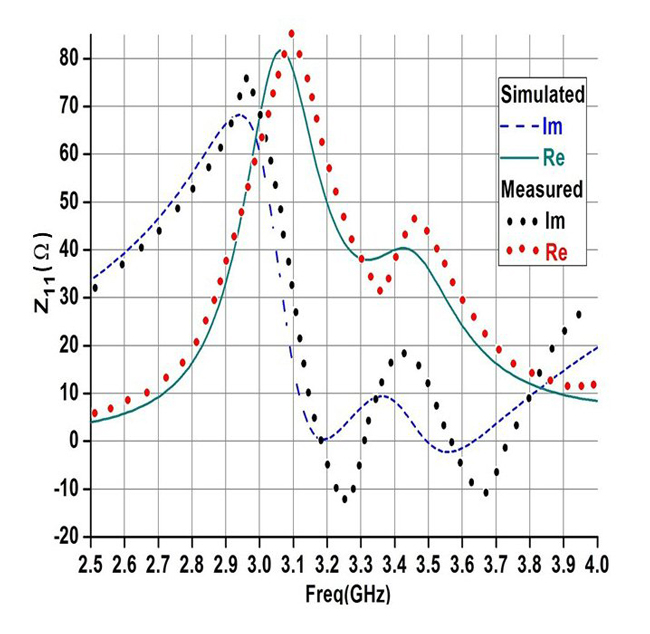 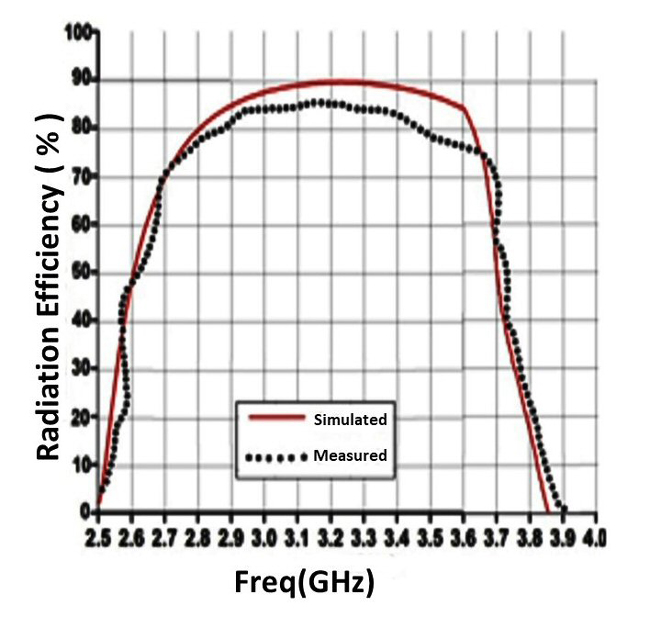 A comparison with similar type antennas in the literature is summarized in Table 2.

(λ0 is the free space wavelength)