We use cookies to provide you with a better experience. By continuing to browse the site you are agreeing to our use of cookies in accordance with our Privacy Policy.
×
Home » 76 GHz SDM360-76 Short-Range Marine Radar for Collision-Free Navigation was Successfully Tested
Industrial/Scientific/Medical Channel Industry News ELVA-1 has reported that its manufacturing partner has conducted successful testing of FMCW E-Band ultra-short range marine radar in narrow waters of the Barents Sea coastline. The max range is 0.324 nmi (600 m) with no blind spot. This E-Band FMCW 76 GHz radar was installed on the wing of the navigation bridge of the sea tug.

The SDM360-76 E-Band (76 GHz) radar has an inherently higher resolution than the S-, X- or even K-Band more typically used for marine radar. The radar provides detailed output radar images both to the dashboard and can transfer data to third party applications which support the open data format.

The SDM360-76 has a dome design with 40 cm in diameter and provides high levels of situational awareness in densely populated and narrow waters. It allows all-round (360 degrees) visibility. 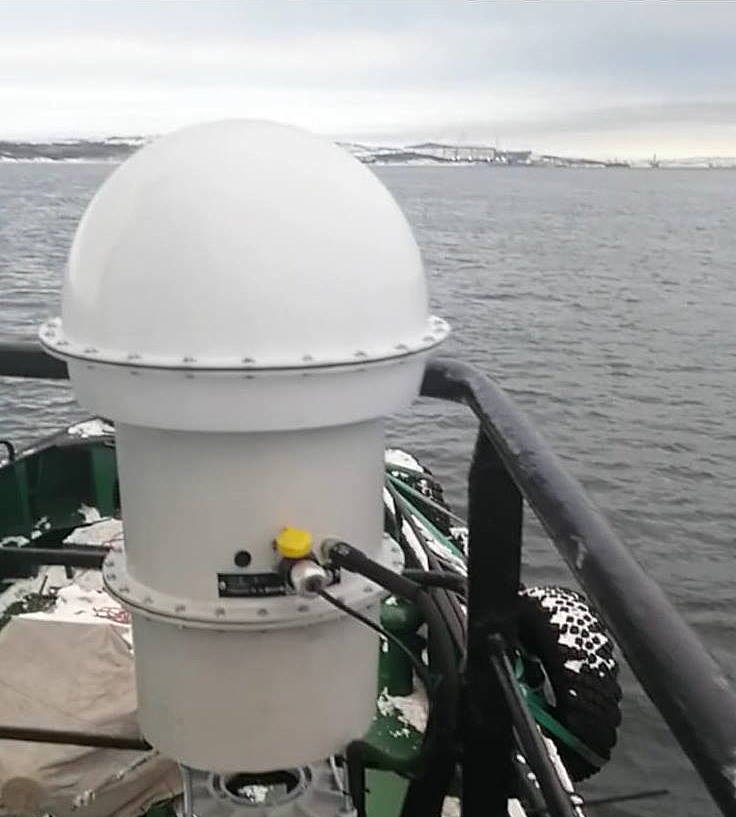 The radar is intended to work as the obstacle sensor for installation on any vessel which operates at pure visibility conditions. This especially includes gas carrier ships and others with dangerous goods, icebreakers and ice-class commercial ships, tugs, rescue vessels, as well as any vessels with an automated collision-free navigation system or almost driverless ones.

A zero blind zone allows SDM360-76 radar to measure the distance between the vessel and possible obstacle (other vessels around, port facilities, coastline) within the typical range from 0 to 300 m (up to 0.162 nmi) with a very high range accuracy of 0.15 m. The range can be set programmatically, for example, set to 600 m (0.324 nmi) or 100 m (0.054 nmi) depending on the current marine environments around the vessel.

The radar software uses data about the contour of the ship and the geometric position of the radars onboard to mathematically calculate the distance from the ship to the target. To eliminate dead zones on large ships, it is necessary to use two or more radar units installed on opposite sides of the ship in the bow and stern.

When using several radar units on the vessel, the operator is provided with a summary radar picture. In addition, warning information about a dangerous approach is displayed indicating the course to the nearest obstacle (marked with a red dot on the screen), and an audible alarm for obstacle awareness can also be activated.

During the tests, passes were carried out along port facilities and ships, including passes at a distance of fewer than 10 m from the side, as well as during mooring operation.

With its high-resolution (0.15 m), the SDM360-76 radar makes it possible to detect large vessels and other obstacles at a distance from 0 to 600 m and also detects very small targets right on the side of the ship. The radar allows to navigate safely in narrow waters and when mooring, reducing the chance of collision with other ships and obstacles and damage to the ship and its cargo.