We use cookies to provide you with a better experience. By continuing to browse the site you are agreeing to our use of cookies in accordance with our Privacy Policy.
Home » The RF/Microwave Industry in the UK and Ireland, Birthplace of Radar and the GaAs MMIC

The RF/Microwave Industry in the UK and Ireland, Birthplace of Radar and the GaAs MMIC

After a year of unprecedented compromises, which nevertheless accelerated the pace of technological progress, European Microwave Week (EuMW) returns to London in February for the first time since 2016. This review of the microwave marketplace in my home country is inevitably a more personal one than those in previous years. In addition to profiling some of the main players in the market in 2021, I will reflect on some of the home-grown heroes of the microwave industry in the U.K. and Ireland who have influenced my own career and whose achievements continue to shape the landscape today. 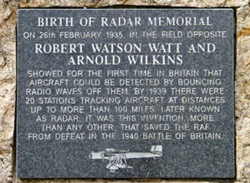 Within a 20-mile radius of where I live in rural Northamptonshire, in England’s East Midlands, are three significant landmarks in the history of RF. Firstly, there is the tiny village of Stowe Nine Churches, where a plaque by the roadside (see Figure 1) commemorates the 1935 experiment when Robert Watson-Watt and Arnold Wilkins used the signals from the nearby BBC radio transmitter at Daventry to demonstrate the feasibility of radar. The local historical connection continues with the world-famous Bletchley Park, where the codebreakers of World War II intercepted German communications and cracked the code of the Enigma machine, giving the U.K. and its allies a critical advantage that helped shorten the war.

Finally—and the reason I originally moved to this part of the country—there is Caswell, the former Plessey research center near Towcester (now owned by photonics manufacturer Lumentum), where the late Jim Turner developed the first commercially-available RF GaAs FET in 1970. In 1976, Turner led the team that included Ray Pengelly, who demonstrated the world’s first GaAs MMIC. Caswell was still basking in the glory of these achievements when I started work there as a new graduate, in August 1977, the same week as the late Tom Brazil, who subsequently was a professor at University College Dublin, chaired the 2006 European Microwave Conference and was elected president of the IEEE MTT-S.

The Caswell site’s involvement in MMICs continued until the GaAs line was shut down in 2004, by which time it was trading as Bookham Technologies.1 Several microwave companies trace their roots to the Plessey legacy and remain in the Northamptonshire area: Microwave Technology designs and manufactures GaN power amplifiers (PAs) with output power to 56 dBm at X-Band, as well as offering design consultancy services. Enterprise Control Systems designs and manufactures RF surveillance and countermeasure systems for military and security applications, including bi-directional coded orthogonal frequency-division multiplexing data links and the AUDS C-UAS RF inhibition systems that counter both small consumer and long-range winged drones. SJ Technologie designs passive RF and microwave components and distributes a range of ferrite, garnet, dielectric and load materials.

On the former Plessey site in Towcester, the BAE Systems Microwave Materials facility researches low-observable and adaptive stealth technologies and manufactures materials to improve the radar cross section of military platforms, including jet aircraft, UAVs, weapons, ships and submarines. Radomes and test hoods are part of its product portfolio. Intelliconnect has a manufacturing facility in Corby, Northamptonshire, where it produces standard and custom RF connectors and adapters, cable assemblies and specialist cryogenic connectors. Amphenol, a global manufacturer of antennas for base stations and small cells, has its U.K. manufacturing facility in Wellingborough.

A similar pocket of microwave businesses grew up in the Lincoln area, resulting from the various GEC-Marconi sites formerly there. These include Linwave Technology, which manufactures microwave and mmWave subsystems—including sources, LNAs, SSPAs and control modules to 94 GHz—primarily for satellite communications (satcom), defense and industrial applications. Teledyne e2V has facilities in both Lincoln and Chelmsford, Essex, and manufactures RF power devices from magnetrons to semiconductors. Under development are dual-channel digital-to-analog converters (DACs) capable of operating into Ka-Band, migrating RF hardware into code, supporting beamforming and enabling dynamic RF system reconfiguration on the fly. The DACs have a 25 GHz output bandwidth at 3 dB attenuation, with much wider bandwidth if slightly higher attenuation can be tolerated. Each DAC has built-in signal processing, including a programmable anti-sinc filter, direct digital synthesis, a programmable complex mixer and digital up-converter.

Unusual as it may seem, the U.K.’s capital city has relatively little microwave industry within its boundaries. An exception is the National Physical Laboratory (NPL), situated just south of the River Thames in the suburb of Teddington. NPL is the U.K.’s National Measurement Institute and is concerned with scientific measurements in all disciplines. This year’s EuMW General Chair Nick Ridler and several of the members of his committee work for NPL. The Electromagnetics group at NPL focuses on providing accurate and repeatable measurements of electromagnetic parameters traceable to the SI system. This work is growing in importance as many 5G use cases rely on accurate and traceable measurements at RF, microwave and mmWave frequencies; NPL’s work helps test, validate and bring to market new technology innovations. TMD Technologies also has a London base, where it manufactures microwave power modules, traveling wave tubes, high voltage power supplies and rugged instrumentation amplifiers for radar, EW, communications, electromagnetic compatibility, scientific and medical applications. 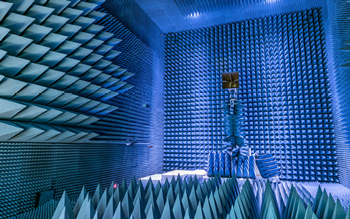 The counties immediately surrounding London—the so-called Home Counties—house a number of establishments with microwave expertise. Chelton (formerly Cobham Aerospace Connectivity) has design, manufacturing and test facilities at Marlow in Buckinghamshire and Newmarket in Suffolk, where it produces antennas for air, land and sea platforms, as well as RF components such as diplexers, splitters and couplers. Chelton’s anechoic chamber at Marlow is shown in Figure 2. In November 2021, to support its R&D activities, Chelton opened a new research facility at the former Redhill Aerodrome in Surrey. The Redhill site is the design center for Chelton’s ground penetrating radar, which is embedded in the company’s stand-off mine and IED detection equipment as well as in the latest generation of Minehound and Wirehound detectors manufactured by Vallon. Engineers at Redhill are also developing 5G and 4G LTE technology for use in the U.K.’s airborne public safety program for emergency services.

The U.K. site of API Tech—also formerly part of Cobham—is in Milton Keynes, where it designs and makes active electronically scanned array radar systems, along with high reliability subsystems, modules and components for defense and space. Spacechips in Harpenden is a startup targeting the space industry with products that include L- to Ku-Band ultra-high throughput on-board processors and transponders for satcom, aiming to make payloads smaller, lighter and less power consuming. It also offers design consultancy services for manufacturers of satellites and spacecraft.

In Stevenage, the Wireless Business Unit of Viavi Solutions manufactures the TM500 Network Tester, which is used by virtually every wireless base station manufacturer. Earlier this year it unveiled TMLite, a streamlined version that delivers features, a software environment and user experience consistent with the TM500 but is hosted on a commercial off-the-shelf server. This enables infrastructure vendors to identify software errors by deploying focused functional test tools earlier in the development cycle, in a more compact package than the standard product. Another test manufacturer, Anritsu, has its U.K. base in Luton, comprising software development, sales and support.

The Cambridge area is a renowned hub of technology innovation, home to both ARM and the Qualcomm site that was formerly Cambridge Silicon Radio. Huawei also has its U.K. R&D center at the Cambridge Science Park. Design consultancies and innovative start-ups are a specialty, the best known probably Cambridge Consultants, which was founded in 1960 to connect the academic excellence of Cambridge University with business and industry. Covering a wide range of technical disciplines, including RF, it has created more than 20 successful spinout ventures, including Cambridge Silicon Radio.

PRFI, with offices and labs near Cambridge, is a technical design consultancy providing services to design and develop MMICs, RFICs and microwave and mmWave modules. Services include feasibility studies as well as the design and testing of custom ICs, components and subsystems for international clients in communications, defense and aerospace and at frequencies to 100 GHz. Surface-mount packaging design for volume production at mmWave frequencies is also a specialty. Forefront RF, a recent Cambridge startup, has developed a new approach to mobile phone front-ends, replacing SAW and BAW crystal filters with an adaptive passive cancellation (APC) circuit. It cancels receiver self-interference in a way similar to noise-cancelling headphones. Because one APC circuit can cover many frequency bands, it saves space and reduces complexity.

The U.K. boasts a particularly tight-knit community of RF and microwave engineers, many of whom regularly attend the bi-annual meeting of the ARMMS RF & Microwave Society, which will make a welcome return in April 2022 after a gap due to COVID-19. Another organization that actively brings engineers together is Cambridge Wireless (CW). In addition to running an annual international conference and a number of focused networking events for the wireless community, CW has an active Special Interest Group for Radio Technology. CW also hosts a 5G testbed, where it runs an accelerator program in partnership with Huawei U.K.

The U.K. Government is actively stimulating technology innovation and manufacturing through Innovate UK and its associated Knowledge Transfer Network and network of Catapults—the most relevant to the microwave sector being the Compound Semiconductor Applications (CSA) Catapult, based in Newport, South Wales. The CSA Catapult supports the U.K.’s RF and microwave industry by providing the following facilities to companies:

In December 2021 the UK’s Department for Digital, Culture, Media and Sport (DCMS) announced the 15 projects that had won funding under its Future RAN competition, including many companies named in this article.2