We use cookies to provide you with a better experience. By continuing to browse the site you are agreeing to our use of cookies in accordance with our Privacy Policy.
×
Home » A High Frequency Broadband Filter
Industry News

To accurately measure the high frequency performance of the components, an industry accepted test fixture is used. X2Y components are measured with a test fixture designed by Inter-Continental Microwave (ICM) for measuring four-terminal surface-mount chip capacitors from DC to 10 GHz. A calibration kit is provided with each of their test fixtures, which allows the ability to de-embed the component data using TRL/LRM or TOSL calibration standards, removing the effect of the test fixture from the device under test (DUT) measurements.

The fixture comes with metallized midsections that are clamped into the fixture main frame between the signal launch pads. The midsection provides a dual purpose, that is, dimensional separation when measuring different sized components (0603, 0805, 1206, etc., for example). Once clamped, the midsection also becomes part of the circuit ground reference. Two midsection contact tabs make electrical contact with the G1/G2 side terminations during measurement for grounding to the fixture. The addition of the grounded midsections to the series-thru test fixture produces shunt data for the X2Y due to its unique internal construction.

With the insertion of a reference electrode between the A and B electrodes, the standard capacitor changes from a single-ended device to a balanced device with two nominally equal halves. Benefits of two balanced capacitors sharing a common structure are matched capacitance (1 to 2.5 percent) line-to-ground, effects of temperature variation and the elimination of the effects of voltage variation; the effect of aging is equal on both caps. Making S11/S22 phase and magnitude measurements of the component with a vector network analyzer can show the relative balance of the two internal capacitors. Each screen shot in Figure 2 shows two comparative data plots (each component half).

These measurements would normally be reciprocal with a standard two terminal capacitor. However, in a balanced device, the same measurements show the matching characteristics of the two component halves. The data shows nearly perfect matching from 30 kHz to 6 GHz.

The X2Y structure has extremely low internal inductance, which broadens the component performance in a circuit. The minimal inductance characteristic is the result of cancellation of the opposing magnetic fields (right hand rule) within the structure's alternating layers of active and reference electrodes. The low inductance can be shown in the ICM fixture with an S21 measurement. The component can be rotated in the test fixture so that various shunt-to-ground measurements can be performed on the internal circuit, as shown in Figure 3 . By inserting nonconductive material between a midsection contact and one of the side terminations of the component (G1 or G2), repeatable measurements can be made to show the pass function of the device.

There are a variety of circuit application scenarios for the four-terminal X2Y capacitor. The most effective use of the device is in a differential application. In this scenario, a user can achieve the broadest performance plot. Attached differentially as a filter, the device is highly effective for noise canceling. X2Y typically replaces five to seven standard passive elements used for the same purpose. The most common elements replaced are illustrated in Figure 4 .

The component can also be used single ended in applications as a low inductance, broadband "X" cap. In this circuit scenario multiple standard caps used for broadband filtering can be replaced by a single X2Y capacitor. Figure 5 shows simulation data of this application.

The standard caps generate an anti-resonance due to mismatch caused by one cap going inductive vs. the other cap functioning in a capacitive state. A single X2Y can eliminate this effect and offer superior performance.

X2Y can be applied to a vast number of applications. Some examples are servers, PC cards, transmission lines, power line filtering and in different types of connectors.

In high speed connector applications, there are many issues involved that can benefit from X2Y technology including balance between the lines, signal crosstalk and power filtering.

X2Y technology can address each of these issues in a single component:

Figure 6 provides a visual representation of the space saving benefits when applying X2Y in an automotive connector application. 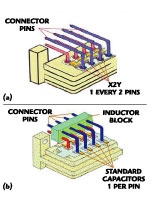 A subtle change to a standard ceramic capacitor creates a balanced X2Y component with broadband performance. Although this concept was illustrated with a multi-layer chip ceramic capacitor, the X2Y structure can also be embedded in through-hole planar devices, or a variety of other structures to enhance performance. Besides ceramic, the structure can be combined with other dielectric materials as required by an application, such as metal oxide varistor (MOV) or ferrite.