We use cookies to provide you with a better experience. By continuing to browse the site you are agreeing to our use of cookies in accordance with our Privacy Policy.
Home » mmWave Beamforming in Dynamic, Urban Environments
6G/5G/Massive MIMO Channel

A typical Doppler spectrum is shown in Figure 3a where the PSD is computed over a 20 ms period at a simulation time of t = 4.3 s. The spectrum shown is the average over all mMIMO elements for a single Rx on the driver’s side of the UE. There are several notable features explained with reference to Figure 3b, which shows the 25 highest power (out of 500) ray paths that contribute to the received signal for a representative mMIMO element.

The dominant peak in the Doppler spectrum arises primarily from the LOS ray path, with smaller contributions from somewhat weaker reflected rays. Since the UE is moving almost directly away from the gNB with a speed

= 14.75 m/s, the expected frequency shift for the LOS contribution is close to the maximum shift Δfmax=

/λ = 1.38 kHz. The observed shift, with a magnitude of 1.35 kHz, is reduced because the velocity of the UE is not directly away from the gNB, and the reflected rays also contribute with somewhat reduced shifts. The negative sign of the shift is expected since the UE is moving away and therefore receives a LOS signal lower in frequency than that of the carrier. This dominant peak sits on top of a broad pedestal, which extends from -∆fmax to +∆fmax and results from diffuse scatter contributions to the PSD, which arrive from all directions relative to the velocity

Finally, the isolated peak having a frequency shift of +3.45 kHz results from rays that first travel to the oncoming bus, diffract off the bus and, finally, travel back to the driver’s side Rx. The size of this shift is reasonable. With the bus approaching the gNB at a velocity of

bus, and the UE and bus approaching each other with a relative velocity of (

|)/λ = 3.8 kHz. Given that these objects are not moving directly toward each other, the reduced shift of 3.45 kHz is expected.

It is notable that this representative Doppler spectrum differs significantly from the often-used statistical model of Clarke7 and Jakes,8 which assumes a dense, uniform scattering environment and ignores strong, isolated contributions that arise from LOS or specular ray paths. The Doppler spectra for the deterministic channel simulated here, in contrast, includes contributions from LOS and specular rays which yield the dominant features in the Doppler spectrum, highlighting the value of deterministic ray tracing simulations. Further, though it is beyond the scope of this article, the time dependent ray path parameters provided by these simulations can be used to construct the time dependent channel impulse response (CIR) from which the explicit degradation of the communication link due to ICI can be determined (e.g. Wang et al.,9 but using a deterministic rather than a statistical CIR).

BEAMFORMING DEGRADATION DUE TO LATENCY

The four active Rxs (out of eight on the UE) and the precoding matrix indices (PMIs) requested by the UE are chosen following a burst of synchronization signal blocks (SSBs) which are part of the 5G NR and can be expected once every 20 ms.4,10 During a SSB burst, the gNB scans a sector by transmitting 64 SSBs using each of the 32 analog-formed beams for each of two orthogonally polarized panels in succession (see Figure 4a). During the SSB bursts, the UE determines the four Rxs out of eight that have the highest signal strength from one of the 64 SSBs.

Since the UE only has four digital RF chains, two successive SSB bursts are required to determine the four active Rxs. Thus, with a period of 40 ms, the UE chooses an active Rx set and reports to the gNB the four unique PMIs which produced the highest signal strengths. These are used to generate four beams for the analog stage of the hybrid beamforming. Next, the CSI required for the digital beamforming stage is obtained from sounding reference signals (SRSs) provided by the UE on uplink (channel reciprocity is assumed). Per the 3GPP specifications,2 the SRS can be provided as often as once per slot; which, for a 60 kHz subcarrier spacing, is a period of 250 μs.

The latency due to both the analog and digital stages of channel estimation in beamforming degrades performance. For example, in the case of PMI set + Rx set selection, motion of the UE or other vehicles in the scene can result in abrupt shadowing of one or more active Rxs from one or more analog-formed beams. Regardless, the gNB will continue to use this compromised PMI + Rx set for beamforming until another set is chosen at a time up to 40 ms in the future despite the significant reduction in SINR over this period.

In the case of SRS-based channel estimation, discrepancies between the measured and actual CSI grow due to the channel changing continuously between SRS measurements. An example of this is shown in Figure 4b where the top panel shows the magnitude of the actual channel gain across a ≈ 100 MHz bandwidth (assuming 60 kHz subcarrier spacing) as a function of time. This CSI is sampled and stored by the gNB (middle panel) once per slot where one slot = 14 symbols = 250 μs. Over the period of one slot, the error between the stored and actual CSI grows continuously from zero. Figure 4 shows CSI for a driver’s side Rx to a representative
mMIMO element over a period of 40 ms starting at t = 2.5 s.

Figure 5 Driving scenario (a) with SINR degradation due to latency in the analog beamforming stage (b). 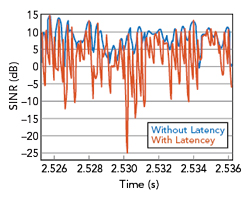 Figure 6 SINR degradation from the latency in the digital beamforming stage. 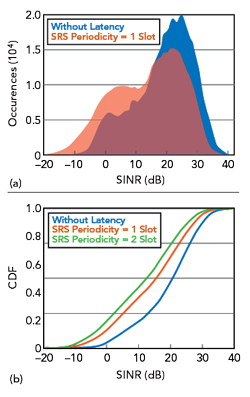 Figure 7 Effects of latency on beamforming: histogram across four data streams (a) and corresponding CDFs (b).

Explicit examples of degraded SINR resulting from each case considered above is readily found in the simulation. For example, Figure 5 shows the SINR (red trace in Figure 5b) for data stream #4 over a period that includes the moment (t1 = 2.483 s) when the passenger side Rxs become rapidly shadowed by a bus. Prior to this moment, at t0 = 2.463 s, the PMI/Rx set had been chosen to include a passenger side Rx for stream #4. When this Rx becomes shadowed at t1, however, the SINR is significantly degraded relative to that which could be achieved if the analog and digital beams were formed based on instantaneous channel measurements (blue trace).

A representative time sequence demonstrating degraded SINR due to latency in SRS-based channel estimation is shown in Figure 6. The red trace shows the SINR for stream #3 associated with an Rx on the driver’s side. This SINR varies periodically from a large value immediately after each SRS measurement to a low value just prior to the subsequent SRS measurement.The periodic degradation in SINR results precisely from the difference between the actual CSI and the CSI periodically captured by the gNB as depicted in Figure 4b. For comparison, the blue trace in Figure 6 shows the SINR that would be attained if the gNB used the actual CSI at all times for beamforming (i.e., ignoring latency).

To gauge the total impact latency has on beamforming for the eMBB scenario considered here, the SINR for the scenario as described above, which includes latencies based on 5G NR standards, is compared to the same scenario but with the effect of latency ignored (i.e., the PMI/Rx set selection is made and current CSI is used at each timestep for beamforming). The SINRs for both scenarios are calculated between t = 22.5 ms and 3.5 s with a 25 μs time step. Beyond the final time of 3.5 s, the UE is strongly shadowed.

A histogram of the results across all four data streams is shown in Figure 7a. The corresponding cumulative distribution functions (CDFs) are shown in Figure 7b where an additional CDF result is included for a scenario where the SRS measurements are made once every two slots. The median SINR is 20.5 dB, 15.4 dB and 12.4 dB for the case which ignores latency and the cases that include all latency effects but use an SRS periodicity of one slot and two slots respectively. Thus, the combined effects of latency, including both PMI/Rx set selection and CSI measurement, act to degrade the median SINR by 5.1 dB when a one slot SRS periodicity is used and 8.1 dB for a two slot SRS periodicity.

Accessing the wide bandwidths afforded by mmWaves necessitates the use of adaptive beam steering methods with degraded performance in a mobile environment due to latency. To assess the performance impact for realistic scenarios, an eMBB use case in a dynamic urban scene is employed using ray tracing simulations to provide a time dependent deterministic channel model for analysis.

The impact from latency alone, evaluated here, can be significant, resulting in a 5 to 8 dB loss in SINR for feasible parameters. The quantitative impact of other effects of mobility on the communications link, such as Doppler shifts which introduce ICI, have not been included here and will further degrade performance. All such effects, however, can be calculated deterministically using, as input, time dependent CIRs constructed from the ray tracing simulations. Ray tracing simulations can provide the foundation for the accurate evaluation of link performance in a mobile environment incorporating all effects which act to degrade service quality.