We use cookies to provide you with a better experience. By continuing to browse the site you are agreeing to our use of cookies in accordance with our Privacy Policy.
×
Home » mmWave Beamforming in Dynamic, Urban Environments
4G/5G/Cellular

In 5G and 6G, mmWaves bring the promise of new, high bandwidth frequency bands, supporting many of the new concepts envisioned for future applications in wireless communications. Propagation losses and fast fading due to increasingly mobile devices and short wavelengths pose challenges for many of these new concepts. mmWave MIMO beamforming technology can help solve some of these issues but must be able to adapt to dynamic channels as devices move and signals interact with people and vehicles moving through a scene. To evaluate performance, ray tracing simulations can predict the fast fading and Doppler spectra expected in an active urban environment and estimate the impact a dynamic channel has on MIMO beamforming.

To support the demand for significantly higher data rates and an ever-increasing number of connected users, wireless service providers have begun using the large expanse of spectrum available in the mmWave band; however, mmWave propagation presents unique challenges. Principal among these are increased free-space path loss and greater attenuation for diffracted beams when compared to the sub-7 GHz bands. To mitigate the increased path loss, high gain antennas for one or both ends of the link are employed. At the base station, exceptionally high gains are attained with many-element phased arrays forming massive MIMO (mMIMO) links with users. The use of such high gain antennas, in turn, demands that adaptive beam steering be used in mobile scenarios. This introduces challenges of its own.

ADAPTING TO A DYNAMIC CHANNEL

Since the channel is continuously changing, latency between the measurement of channel state information (CSI), e.g., beam selection and/or channel sounding, and use of the adapted beam for data transmission yields a throughput that is degraded relative to that achievable in a static scene. This degradation can be particularly severe for high mobility scenarios and for scenes with obstacles that can dynamically block a link, as shadow fading is particularly sharp for mmWaves. For these reasons, an accurate prediction of link performance in a mobile environment requires knowledge of the time dependent channel and an understanding of relevant latencies.

Beyond the challenges associated with adaptive beamforming, the mmWave channel is also a faster fading channel compared to sub-7 GHz channels because of the shorter wavelength. Thus, the coherence time is shorter, and the corresponding Doppler bandwidth is broader. For the orthogonal frequency division multiplexing (OFDM) waveforms used in 5G New Radio (NR), the increased Doppler bandwidth results in interference between subcarriers yielding further degradation of throughput. 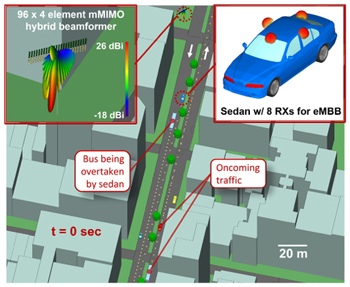 To illustrate the impairments due to mobility, consider the use case of providing enhanced mobile broadband (eMBB) service to a moving vehicle in a dense urban environment and in the presence of other moving vehicles. Realistic predictions of the time-varying channels are made using Remcom’s Wireless InSite® propagation tool1 to perform ray tracing simulations over a series of densely-spaced time steps. Simulations show that the vehicle-mounted receivers (Rx) detect fading as the vehicle moves along its route, and illustrate an example of a Doppler spectrum that results from the motion of the vehicle receiving service and other vehicles around it. Next the degradation in the signal-to-interference-plus-noise ratio (SINR) due to latency between measuring and using the CSI for adaptive beamforming is considered. Relative to the case where mobility is ignored, this latency alone provides a degradation of 5 to 8 dB in the SINR for latency parameters suggested by the 5G NR standard.2-4

The specific eMBB scenario considered here is the hybrid beamforming of four data streams to a mobile vehicle. This scenario is motivated by a recent 5G NR field trial5 where a data rate of 11 Gbps was demonstrated across four data streams and 732 MHz of aggregated bandwidth for a vehicle moving at 30 km/h and communicating with hybrid beamforming mMIMO base stations operating at 28 GHz. For an increased speed of 100 km/h, the throughput was reduced to 8 Gbps. Whereas the field trial was conducted in a pristine environment, within the context of our simulations, a similar vehicle-to-network (V2N) interface is deployed but in a dense urban environment and in the presence of additional moving vehicles (see Figure 1).

Figure 2 Receiver fading at the front windshield (a), rear windshield (b), driver side (c) and passenger side (d) of the moving sedan over 5.5 s.

The sedan which receives the eMBB service is equipped with a total of eight Rxs: two cross-polarized Rxs at each of four locations as shown in the upper right inset. Further, the sedan is equipped with four baseband RF chains so that it can decode four data streams from the four Rxs with the highest signal strength. The 5G Node B (gNB) radio base station is located at the top center of Figure 1 and shown in detail with exaggerated dimensions for visualization in the upper-left inset. The gNB is a 28 GHz hybrid beamformer consisting of four digital baseband RF chains. Each drives a 96-element phased array equipped with an analog beamformer. Each 96-element panel is a rectangular array that spans four elements in the vertical direction and 24 in the horizontal dimension with λ/2 spacing. The elements themselves are patch antennas with 6 dBi gain. Two panels are co-located but with elements having orthogonal polarizations at ±45 degrees relative to vertical. The second set of two panels are similarly co-located but positioned vertically above the first two-panel set. The four-panel assembly is angled down by 10 degrees to increase coverage to users at street level. Each panel is equipped with an analog beamformer which enables beam steering over 32 angles in the horizontal direction evenly spaced across a 120-degree span. These 32 directed beams are configured in the precoding matrix that can be requested by the user equipment (UE), i.e., the sedan receiving service. One such beam produced by a single panel is shown in the upper-left inset of Figure 1. The total RF power output by the four-panel array is 27 dBm.

Having four digital baseband RF chains, the gNB can simultaneously transmit four data streams to the UE. The gNB does so by employing digital beamforming using one beam from each panel selected from the precoding matrix. With these four analog-formed beams, the digital beamformer employs regularized-zero-forcing (RZF)6 to determine the optimum complex weight coefficients for transmitting each of the four data streams to an individual Rx on the UE, while simultaneously minimizing interference to the other three active Rxs not associated with a given data stream.

The UE travels along Park Avenue at a constant speed of 14.75 m/s. Along the route, it overtakes a bus moving at 7 m/s in the adjacent lane and is proximate to oncoming traffic, a car (14 m/s) and a bus (13 m/s). Figure 1 depicts the scenario at an initial time, t = 0 s, where the yellow dots which extend in front of each moving vehicle denote waypoints at equal time intervals for the given route.

Before considering the effects of latency on beamforming, first consider the general characteristics of the fading channels for the scenario described above. Remcom’s Wireless InSite is used to evaluate the propagation channels by performing ray tracing for each of the 384 × 8 element pairs between the mMIMO gNB and the UE’s Rxs. Ray tracing is performed at each of a dense series of time steps spaced by 2.5 ms over a time interval between t = 0 and 5.5 s.

New mobility features currently under development in the Wireless InSite propagation tool facilitate simulation of the motion of the UE along with other vehicles in the scene so that any geometry that can affect the propagation channel is accurately accounted for at each time step. Ray path trajectories which connect a transmit-receive (Tx-Rx) element pair can include up to six reflections, one diffraction and attenuation by foliage. In addition, diffuse scatter off the terrain, asphalt and nearby buildings is included. Linear interpolation of ray path parameters (e.g., path length, path loss and phase shift) between time steps allows a reliable means to reconstruct ray path properties at arbitrary times. The parameters for each ray path at an arbitrary time can then be used to calculate the complex path gain and, by coherently summing over all complex path gains, the complex channel gain for each Tx-Rx element pair.

These results are used to predict channel fading for each Tx-Rx element pair as a function of time. Figure 2 shows the magnitude of the channel gains over the entire route for each of the 384 mMIMO elements to four representative Rxs on the UE:

Front Windshield (see Figure 2a). For most of the time, this Rx does not have a strong path from any mMIMO element, but typically has a channel gain determined by the sum of many diffuse scatter contributions, which arrive from a multitude of directions. As a result, one observes very fast fading for much of the time with rapid fluctuations in channel gain. There is a period, however, from t ≈ 0.5 to 1.0 s, over which the channel gain is relatively large for the mMIMO elements of one polarization. This is due to a strong reflection off the slow-moving bus that the UE is gaining on which exists over this period, allowing significant power to reach the Rx. 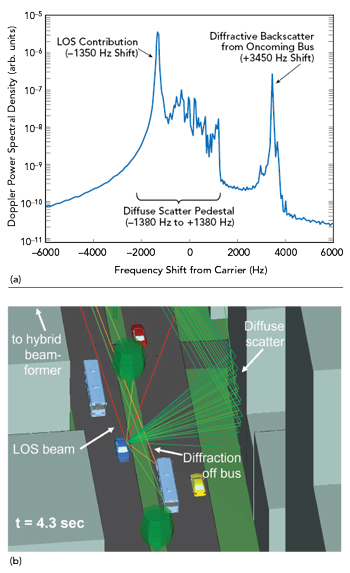 Figure 3 Doppler shift at the driver’s side receiver (a) showing effects of diffraction from an oncoming bus (b). 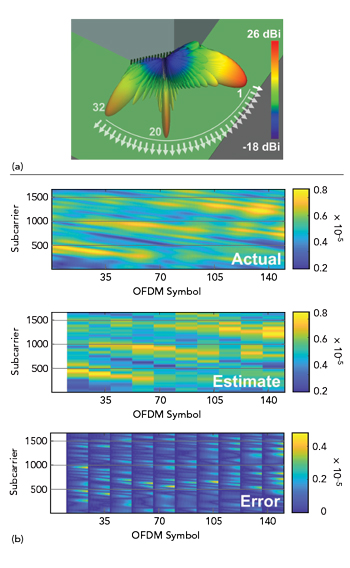 Figure 4 Sector scan during a signal synchronization burst (a) with channel estimation based on sounding reference signal (b).

Rear Windshield (see Figure 2b). For this Rx, the characteristics of fading for the first ≈ 3.5 s are notably different from the front windshield Rx, as the gain is significantly increased and has a fading contribution that fluctuates on a slower time scale. This is because a line-of-sight (LOS) and one or more specular rays are incident on this Rx over this period. Beyond 3.5 s they are shadowed by one or both buses.

Driver and Passenger Side Rxs(see Figures 2c and d). These Rxs show similar behavior to the rear window Rx, as they also have a LOS and strong multi-path components reaching the Rxs for the initial portion of the route. The passenger side Rx is abruptly shadowed at t ≈ 2.5 s, at which point the UE is overtaking the bus on its passenger’s side.

All Rxs. For all Rxs, a slow fade is observed for short to long timescales due to free-space path loss as the UE recedes from the gNB.

Another quantity of interest is the distribution of frequency shifts that arise due to the Doppler effect, as such shifts introduce inter-(sub)-carrier-interference (ICI) in an OFDM waveform and thereby degrade the communication link. The power spectral density (PSD) of the Doppler frequency shifts relative to the carrier is given by the PSD of the time dependent complex channel gain over a given interval.

Effects of Mobility on mmWave Beamforming in Dynamic, Urban Environments