We use cookies to provide you with a better experience. By continuing to browse the site you are agreeing to our use of cookies in accordance with our Privacy Policy.
Home » Online Spotlight: Dual-Frequency MIMO Antenna with High Isolation Based on Odd-Even Mode Analysis and Defected Ground Structure The use of MIMO antenna technology greatly improves channel capacity and transmission efficiency of a communication system without increasing working bandwidth and power. To meet miniaturization requirements, however, the distance between antenna elements is reduced, and coupling between ports is inevitable. Several approaches have been proposed to improve isolation between MIMO antenna elements. Some adjust the position and distance between ports.1 Incorporating decoupling structures with metamaterials is also relatively common.2,3,4,5,6,7 The isolation of some antennas is improved by introducing single-ended lines or parasitic structures.8,9,10,11,12,13,14 Defected ground structures are also employed.10,15,16,17,18 The use of resonant cavity decoupling structures and other structures has been reported as well.19,20,21,22

Current decoupling schemes are based mainly on structures that achieve high isolation through continuous adjustment and optimization. The work described here starts from the theory, considering that the odd-even mode analysis method is suitable for matrix decoupling, so it can be applied to MIMO antenna design. The odd-even mode analysis method is often used in the design of radio frequency circuits.23,24 The calculation process is simplified by separate analysis and calculation of the odd and even modes. It is commonly used in the design of microwave structures such as filters, waveguides, metamaterials and antennas.25,26,27,28,29,30 This greatly simplifies design of the decoupling structure at 2.45 GHz and avoids tedious optimization and simulation.

The two-port MIMO antenna is regarded as a two-port network, as shown Figure 1.

The impedance matrix of the two-port network is

is the two-port even mode excitation,

is the two-port odd mode excitation.

According to the relation between Z and S matrices,

If the antenna is well matched and isolation is high, then S11 = S22 = 0 and S12 = S21 =0. Substituting these values into the above formula, Ze = Zo = Z0 is obtained. When Ze = Zo = Z0, it is also easy to obtain S11 = S22 = 0 and S12 = S21 = 0. Therefore, by adding a suitable decoupling network, the odd mode impedance and even mode impedance of the network are respectively equal to the characteristic impedance, which simultaneously improves isolation and matching characteristics.

The MIMO antenna unit is based on a planar inverted F antenna element (see Figure 2). By bending the planar inverted F antenna element, its size is reduced while forming resonant frequencies at 2.45 and 5.8 GHz. Moreover, loading of the short-circuit via also changes the position of the antenna zero voltage, thereby further reducing antenna size. The antenna is built on an FR4 substrate with a loss tangent of 0.02 and a dielectric constant of 4.4. The substrate is 42.5 × 52 × 1.6 mm, and the ground plane is 35 × 52 mm. Other dimensions are listed in Table 1. Figure 2a is the uncoupled antenna with simulated S-parameters shown in Figure 3a. It matches well at both 2.45 and 5.8 GHz; however, the distance between the two antennas is only 0.128 λ, so it is necessary to design a decoupling structure to improve isolation. 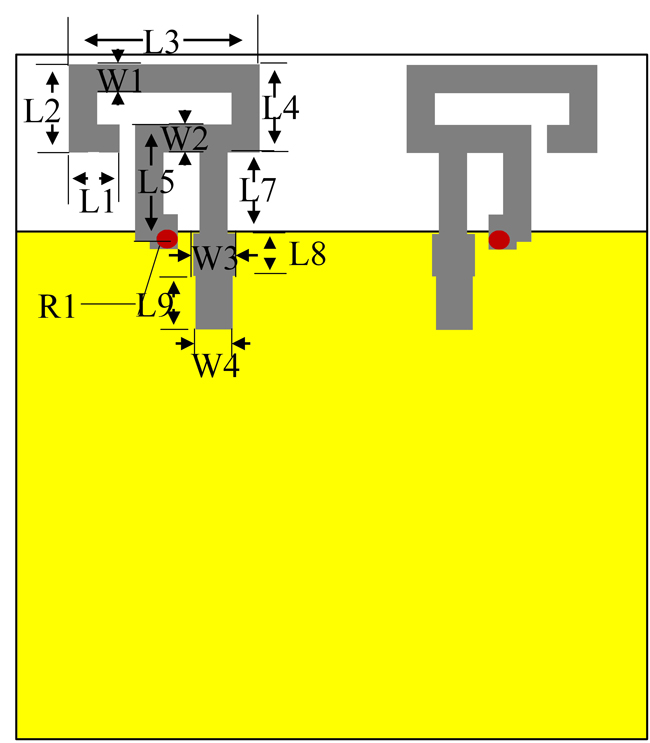 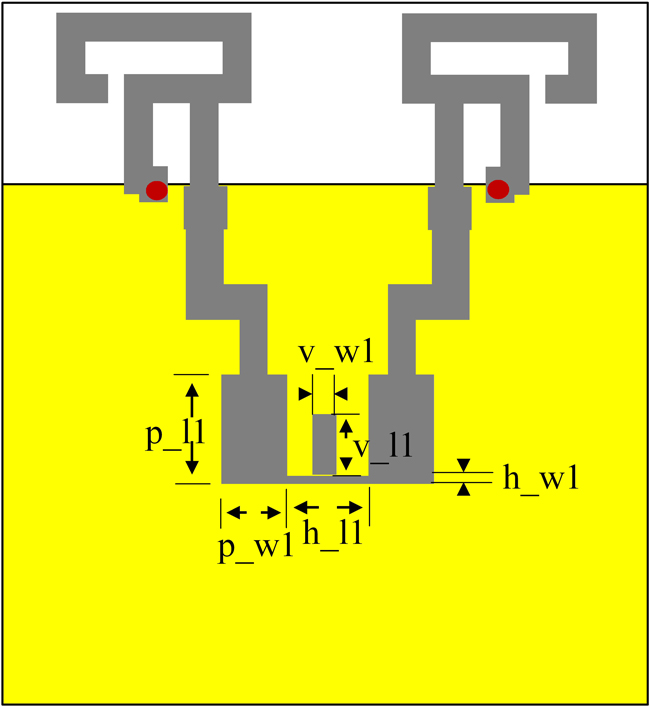 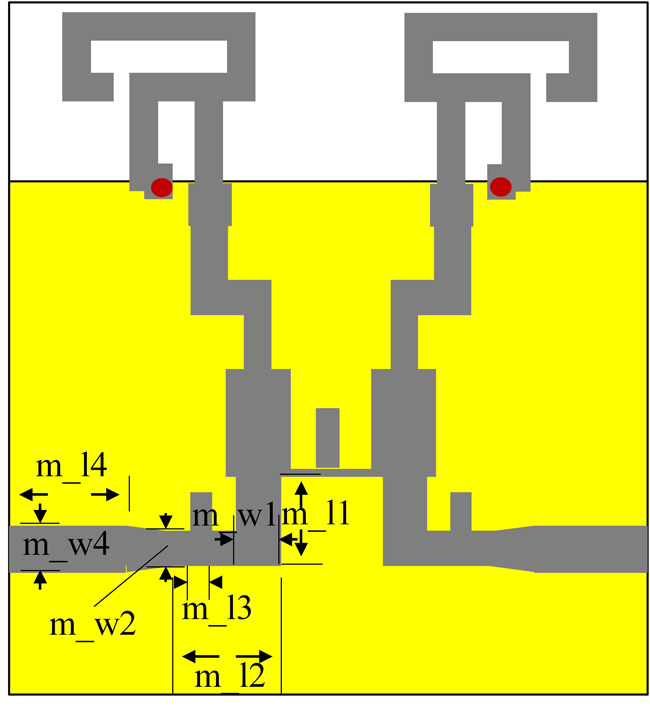 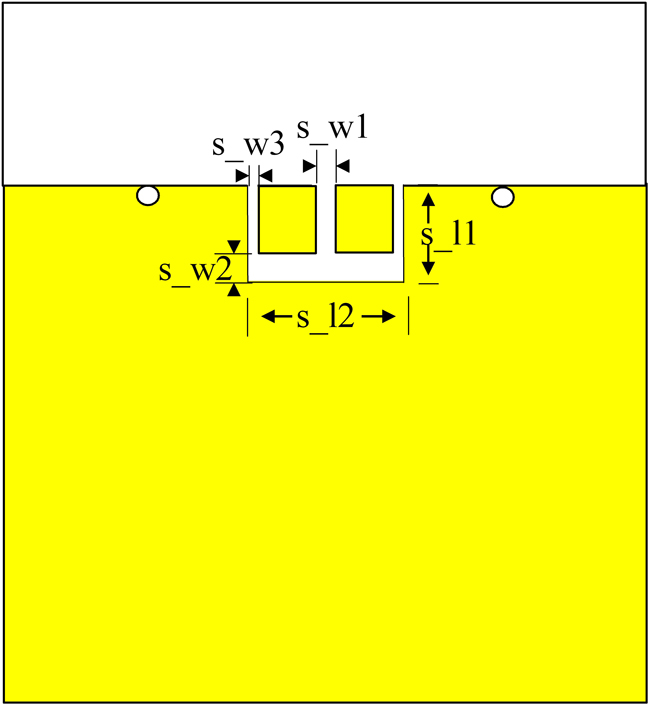 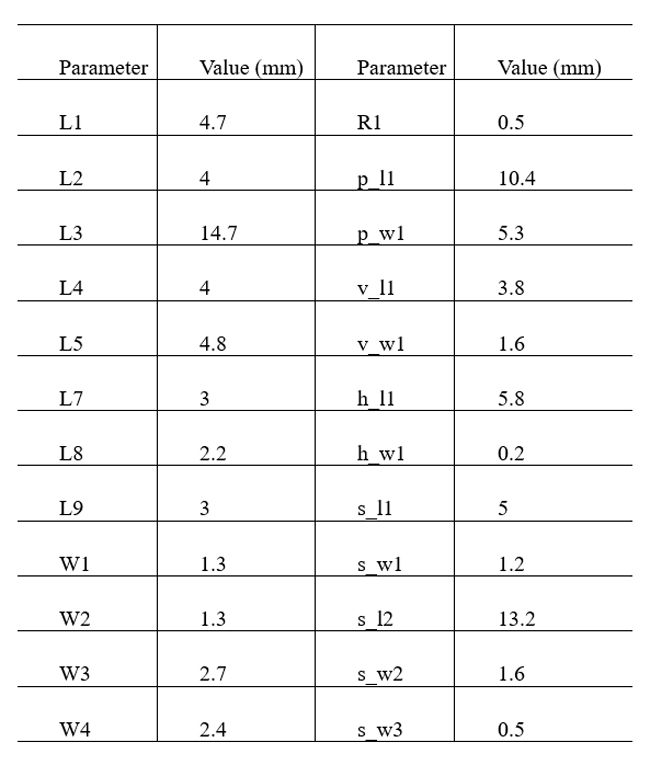