We use cookies to provide you with a better experience. By continuing to browse the site you are agreeing to our use of cookies in accordance with our Privacy Policy.
×
Home » UWB: Enhancing Positioning, Safety and Security for Connected Vehicles
IoT/M2M/V2V Channel

With four sensors in a many-to-many UWB architecture, a ranging round should be completed in well under 10 ms, with the exact timing dependent on implementation. A ranging round is the time it would take for the four sensors to measure the four distances shown in Figure 2. For a vehicle traveling at 60 m/s, a ranging round time of 10 ms means the vehicle would travel only 60 cm between messages, giving each vehicle adequate time to react safely to speed changes of the lead vehicle. Multiple UWB links enable the platooning vehicles to maintain the correct orientation to each other. This could enable each vehicle’s ANS to follow the lead vehicle around curves, staying in the same track as the lead vehicle. 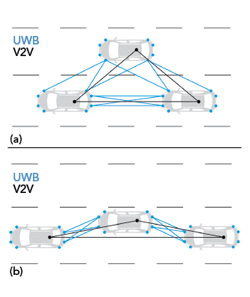 Figure 3 A vehicle joins a vehicle group with V2V and UWB before merging (a), then completes the merge (b).

Merging is another process where CAVs can benefit from UWB sensors. Examples of situations where vehicles need to merge include entering a highway from an on-ramp or joining the middle of a platoon. Figure 3 shows a situation where one vehicle needs to merge with two other connected vehicles. The ANS first establishes a connection using V2V, forms a group and communicates the need to merge. The system would then determine the UWB sensors needed for the operation, initialize those sensors and launch continuous UWB sensing (see Figure 3a).

The next step is for the two vehicles to form a gap for the merging vehicle to join. The merging vehicle would then move into the lane between the two other vehicles as shown in Figure 3b. The ANS determines the appropriate UWB sensors required to participate. After joining the platoon, the UWB sensors maintain continuous operation to regulate the distance and orientation of the vehicles. 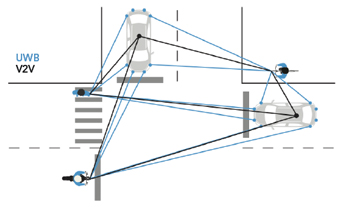 Another key potential life-saving application takes advantage of UWB coupled with V2P communications using a VRU’s smartphone or other UWB-enabled device. This works similarly to V2V: the ANS, coupled with V2P, can determine if a VRU is in the vicinity and then start the UWB distance measurement process. UWB tracks the exact position of the VRU and determines the possibility of a collision. As an example, vehicles stopped at an intersection, such as the three-way stop shown in Figure 4, could use UWB sensors to determine the distance to the VRUs and avoid a collision.

UWB can also be used to mitigate risk for connected car threat scenarios. The Car Connectivity Consortium already includes UWB in its Digital Key 3.0 specification, which enables drivers to securely use their phones to open and start their cars. UWB increases security by measuring the distance between the owner and the vehicle. Ensuring the owner is in the proximity of the vehicle prevents “person in the middle” vehicle attacks where thieves intercept and relay distant signals from an owner’s phone to gain access.

With V2V communications, it is vital for safety that vehicles can trust the information received from other vehicles. Detecting misbehaving actors transmitting inaccurate information, whether unintentionally or maliciously, is an important security and safety concern. UWB can provide the required trust between vehicles by ensuring they know each other’s position, validating their identity and detecting misbehavior. This is especially important when the communication includes life-critical information. The analysis in Table 1 summarizes the most critical 5GAA cooperative driving use cases where inaccurate information could be deadly.

UWB sensors could be used to verify that the vehicle being communicated with over V2V is really in the position indicated. If the position does not correlate with the GPS coordinates transmitted in the BSM or CAM, then any transaction between the vehicles would be in doubt and appropriate precautions could be taken. Identification of misbehaving actors in the system and then revoking their certification will help ensure a trusted V2V system.

In one potential example of fatal spoofing (see Figure 5), a spoofing vehicle (SV) traveling behind a passing vehicle (PV) pretends to be in front of the vehicle by transmitting incorrect GPS coordinates, falsely indicating it is in front of the PV instead of behind it. If the PV requests “see through for passing” information, the SV could then transmit an image of a clear road. Based on this false information, the PV would start to pass and could collide head-on with an oncoming vehicle. This can be avoided if the PV is able to verify, using UWB, whether the SV is truly the vehicle in front.

UWB can also be used to accurately identify vehicles in other use cases. Following directly behind two vehicles closely tailgating each other, it could be difficult to know with which of the two your vehicle was communicating. UWB distance measurement could confirm communication with the appropriate vehicle. Another example: following two vehicles traveling side by side in adjacent lanes. If one vehicle is using real-time kinematics to adjust its GPS coordinates and the other vehicle is not, the two vehicles could be reporting the same location. 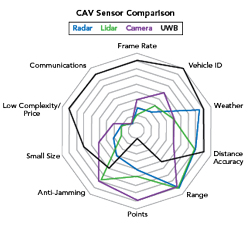 UWB provides an excellent augmentation to the existing CAV sensor suite. Its high frame rate provides much faster reaction times than any other system. The ability to provide communications in addition to sensing enables UWB to provide secure distance measurements and accurately identify other vehicles. Being an RF technology, it operates much better than optical systems in poor weather. UWB’s small size, low complexity and low cost make placing multiple sensors around a vehicle feasible.

UWB sensors offer the benefit of simplicity, which helps vehicles process and respond to information more quickly. The processing power required to implement UWB secure ranging is relatively small. To provide the same information about the relative distance and orientation of two vehicles without using UWB requires both radar and cameras. The camera would need to look at the scene, analyze the image, extract key features and determine orientation. The radar would measure the distance between the vehicles, with the accuracy dependent on the radar’s resolution and its short distance performance. The camera and radar data would then be merged using sensor fusion, which may require raw source data and an extensive library of 3D image processing algorithms to combine and then extract the information. The maximum frame rate of such a system could be more than 3x slower than UWB frame rates. The simplicity of a UWB based system also reduces the probability that an issue with the code could cause an accident.

Figure 6 compares CAV sensors. The introduction of UWB into the CAV suite provides a robust, faster, secure and accurate system with superior price for the performance.

Many of the techniques discussed in this article already exist. The 802.15.4z specification provides for a many-to-many UWB architecture, providing the basis for a secure multi-point ranging area network (RAN). V2V defines the ability for vehicles to form a group, which is the basis for selecting the vehicles to participate in the UWB many-to-many RAN. Once a group is formed, there is a need for specifications covering how the system using the V2V link can identify, select, initialize and operate a secure UWB RAN. For broad adoption, standards need to be developed to enable UWB devices on vehicles from different manufacturers to interoperate. Qorvo is leading an effort to have its patent-pending UWB + V2X concept adopted as a key part of the connected vehicle rollout.

UWB technology is a much simpler system than radar or cameras, requiring far fewer lines of code and less processing resources. With a low cost for implementation, centimeter accuracy and low latency, UWB provides a high performance to cost ratio, enabling manufacturers to implement a more robust CAV sensor suite.

Connected vehicles will introduce a new era of vehicle safety. The key to this will be the creation of a trustworthy communication environment between vehicles. UWB can provide the required trust between vehicles by ensuring they know each other’s position, validating their identities. This is especially important when communicating life-critical information. High speed cooperative maneuvers are some of the most critical CAV operations. UWB can provide the speed and accuracy needed to enable the ANS to avoid life threatening situations by reacting much faster than a human, even faster than existing radar and camera systems. Even at slow speeds, vehicle maneuvering can result in fatal accidents, especially when a VRU is involved. By using UWB to measure the distance to VRUs, the navigation system can help ensure that accidents can be avoided.