We use cookies to provide you with a better experience. By continuing to browse the site you are agreeing to our use of cookies in accordance with our Privacy Policy.
×
Home » Differential S-Parameter Measurements Using A Single-Ended Two-Port Network Analyzer and Ultra-Broadband Baluns
Test and Measurement Channel

A block diagram of the two-port measurement system is shown in Figure 1. The VNA is an Anritsu MS4644B, and the baluns are HYPERLABS model HL9407. These baluns feature -3 dB bandwidth from 500 kHz to 67 GHz, ± 0.1 dB amplitude match to 30 GHz and ± 0.3 dB amplitude match to 67 GHz. To improve the impedance match of the differential test ports, 10 dB attenuators were added to each of the four differential test ports (see Figure 1). 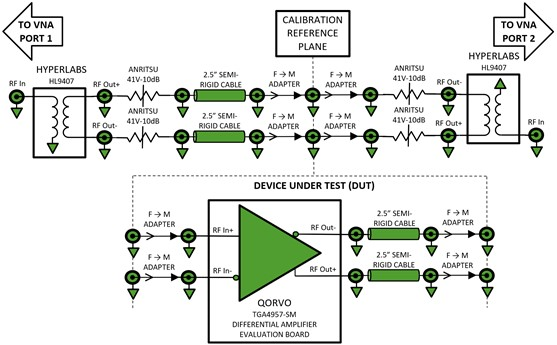 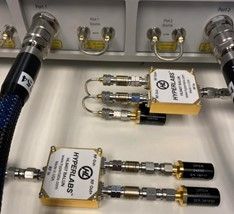 Only one calibration kit’s coefficients could be loaded into the MS4644B VNA. A small calibration error results from minor differences between the two calibration kits. The quality of the resulting calibration is shown in Figure 3, the active four-port measurement in Figure 4 and the defined DUT in Figure 5. 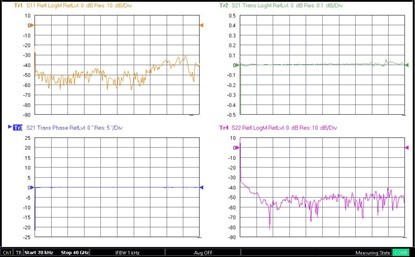 Fig. 3 Thru verification of the differential calibration. 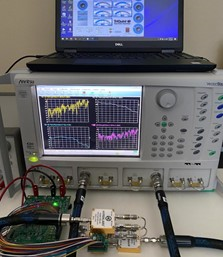 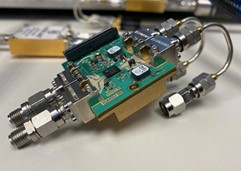 A block diagram of the four-port measurement system is shown in Figure 6. The VNA is an Anritsu MS4647B with MN4697C Multi-Port Test Set. Calibrations were performed using the Anritsu 36585V-2F Precision AutoCal. 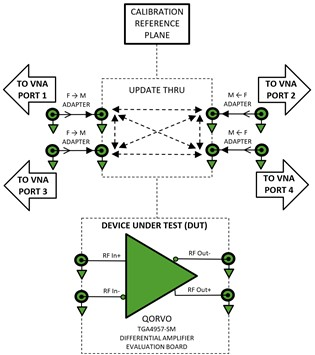 After completing AutoCal, a thru update was performed for all port combinations shown in Figure 6 using an Anritsu 33VFVF50C female-to-female adapter (23.62 mm). The delay of the adapter was entered as a calibration coefficient and corrected by the thru update operation. However, the slight attenuation of the adapter was not corrected. As a result, insertion gain measurements taken on the four-port VNA measurement system are slightly optimistic. 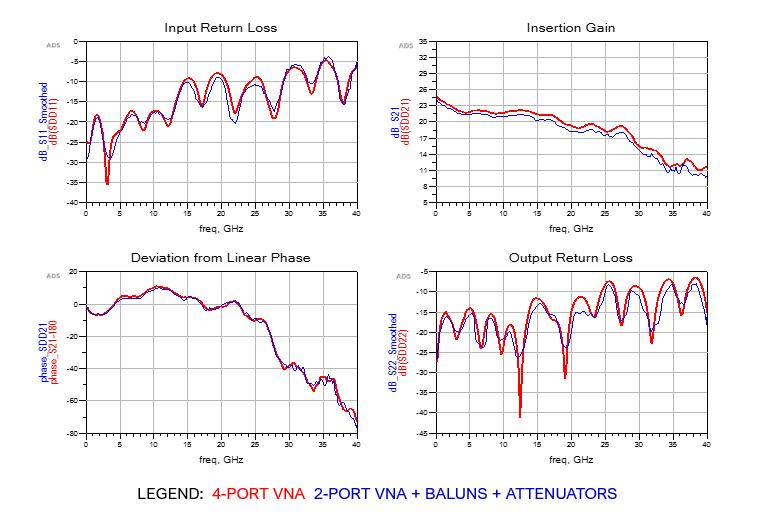 The |S11| and |S22| data from the two-port system is noisy and was smoothed with a 4.5 percent moving average in the plots. The raw data is presented in Figure 8. Port 1 is noisier than port 2, which may be related to the semi-rigid cables integrated into port 1 of the calibrated measurement system. The cables may have deformed due to torquing and flexing after calibration.

Fig. 8 Comparison of the raw |S11| and |S22|.
The |S21| response measured with the four-port system is notably higher than |S21| measured on the two-port system. This can be attributed to two factors: First, the four-port measurement system was used to characterize a DUT that did not include any coaxial adapters nor cables. In contrast, the two-port measurements system was used to characterize a DUT that included adapters and cables. Second, mentioned previously, the thru update used during calibration of the four-port measurement system did not account for the insertion loss of the Anritsu 33VFVF50C female-female adapter. These two factors explain the discrepancy in measured |S21| response.