We use cookies to provide you with a better experience. By continuing to browse the site you are agreeing to our use of cookies in accordance with our Privacy Policy.
×
Home » Solid-State Power Density Enabling Unprecedented EMP Capabilities

Solid-state RF amplifier power density has been exponentially increasing for decades and will continue this trend for many decades. It has just reached levels sufficient for commercial and tactical software-controllable electromagnetic pulse (EMP) applications. This article focuses on the history, the underlying physics and future trends.

As the world becomes saturated with electronics and electronic systems built for both altruistic and nefarious purposes, providing an altruistic operator with control over device functionality in a hostile environment is necessary. There is a growing need for “electronic safe zones” (ESZ), for example, as professional sports, entertainment venues, airports, government facilities, oil pipelines, nuclear sites, critical infrastructure and mass gatherings are threatened by attack from emerging AI-driven unmanned aerial systems. A lack of ESZs threatens our right to privacy. The ubiquity of sensor electronics, including the omnipresence of cameras, where the activities of large portions of the world’s population are constantly monitored, and the trillion-device IoT, where microphones record millions of hours of conversations, are disturbing developments. From wayward autonomous vehicles to computers infected by viruses, the need for ESZs is apparent. A commercially viable EMP capability provides a means for establishing an ESZ. This article discusses advances in the enabling solid-state RF power amplifier (PA) electronics.

The future of solid-state RF PAs is the future of wireless technology itself. Without these devices, none of the technology that is so intertwined with our day-to-day lives is possible. As the need for wireless devices has grown, so too has the power density of the enabling devices.

Figure 1 shows the trend of RF PA device output power over the last 20 years.1 The saturated power (Psat) from more than 900 silicon and III-V PAs operating in the 0.1 to 4 GHz range shows an exponentially increasing Psat. Analyzing the data yields two trends: the overall average and the “envelope” average of the five highest PAs from a given year. This envelope line represents the trend for the increase in power density, showing that Psat values have increased from about 25 dBm in 2000 to 60 dBm in 2019, a linear increase of more than 3,000x in less than 20 years. This equates to 1.8 dB per year, about a 50 percent increase in output power per year. Projecting this trend into the future, the power density of these solid-state devices will double about every 20 months.

The Epirus points on the plot reflect both integrated and printed circuit form factors being developed by Epirus. Based on EMP system design calculations, Epirus’ first 63 dBm output power device in 2019 had sufficient power density to make commercial EMP feasible, and Epirus expects the output power density to double every 12 months. 69 dBm devices now being developed will achieve the power the envelope line trend predicts in 2026. By 2025, Epirus expects its saturated power capability to reach 80 dBm.

How will the exponential increase in solid-state output power continue? Figure 2 shows a simplified solid-state PA circuit, indicating three areas enabling improvements in the RF power, designated 1, 2 and 3. Accompanying these, the authors recognize the need for improved thermal management, through cooling technologies and other proprietary techniques. Emerging cooling technologies to solve the thermal issues have been well documented.2 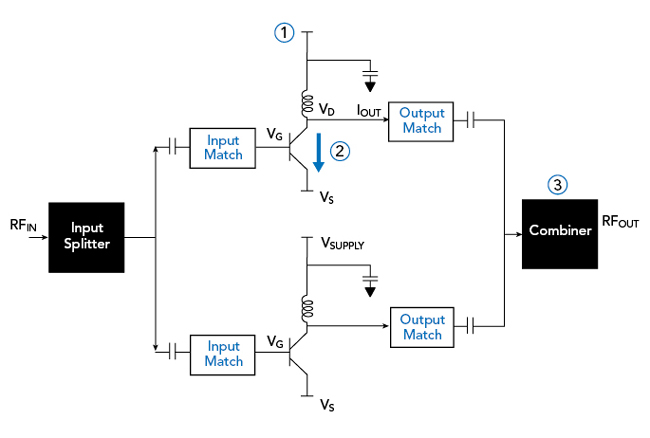 Using simplifying approximations, the RF output power of a PA is defined by:

Equation 1 shows the power output as the sum of the powers from n RF devices, minus the loss through any combining circuits. Equation 2 shows the power through the ith device is a function of the drain voltage, VD, and the current to the RF load, IRFout. IRFout is proportional to the drain current, given by Equation 3. In an RF device, the drain current creates the negative cycle in the sinusoidal voltage signal going out to the RF load.

The following sections discuss each of the areas that will enable continuing improvements in PA output power.

One opportunity for increased RF output power comes from the power combining of multiple devices (see “3” in Figure 2). The revolution that has occurred and will continue in this area is due to chip scale combining, high breakdown voltage combiners and combining in three dimensions using 3D heterogeneous integration techniques.3 Multiple semiconductor devices can be combined with chip scale circuit topologies to increase power density at the module level, using 90 degree hybrid circuits or microstrip-based Gysel combining. Hybrid circuits have the advantage that reflected power is handled with an isolation port and significantly reduces high VSWR and the risk of failure seen by the device.

Several topologies can be scaled to an arbitrarily large number of device ports, the only limitation the voltage in the circuits can withstand before breakdown. Combining technologies with high-power III-V materials enable very high power levels at the integrated circuit. There are losses that occur in splitting and combining the RF signals that must be considered, as well as impedance matching network losses. Large RF bandwidths require multiple matching network stages or RLC circuits, while a narrower bandwidth reduces the number of matching circuits and the loss. 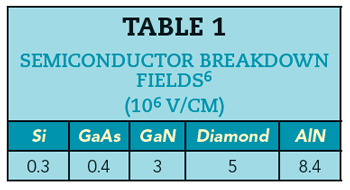 A second opportunity to increase the RF output power is raising the breakdown and supply (i.e., drain) voltages of the RF transistor (see “1” in Figure 2). Increasing the drain voltage enables a larger voltage swing, increasing the output power of the amplifier. This also requires higher breakdown voltage: if the drain voltage, VD, comes close to or exceeds the breakdown voltage, Vb, it normally destroys the transistor.

The third opportunity to increase PA output power is by increasing the transistor drain current (see “2” in Figure 2). A generalized equation for the drain current through a solid-state device is

where the terms W, μ and q are the channel width, mobility of electrons and electron charge, respectively. The terms ns(x) and V(x), the electron density and channel potential, respectively, are functions of the position, x, along the channel length.

The saturated drain current under specific boundary conditions7 is given by Equation 5. There are many models to describe the drain current of HEMT devices using both empirical and theoretical approaches to determine the saturation current. The authors recognize this is a significant research area and decided to use the model by Charfeddine et al.7 for this discussion, recognizing there are different forms of this expression.8,9 Equation 5 gives a sufficient general approximation for the expected power gains. For RF power amplification, the drain current of a HEMT device that operates in the saturation region is thus:

where Vth is the threshold voltage, Vgs the gate voltage and Vds the drain bias. The terms C and Esat are the capacitance per unit area of the device and the E-field10 within the device at saturation, respectively.

Increasing the current comes from several areas, with new materials beyond GaN potentially providing up to an order of magnitude increase.11 Improvements such as electron mobility and gate capacitance, μ and C, will depend on future device materials. However, an approach that does not require materials engineering is to increase the periphery of the device, W.

It is critical that these improvements maintain the same or increase drain voltage. GaAs, for example, has improved electron mobility but significantly degraded breakdown voltage. The important parameter, then, is the transconductance or gain of the semiconductor device, gm; the transconductance is the change in drain current as a function of the applied voltage, defined as

Increasing the gain of the semiconductor device increases the RF output power at a given drain voltage. Materials and larger device peripheries can increase the transconductance. As three dimensional and integrated circuit technologies improve, channel depth will also increase drain current.

The gate capacitance, C, is inversely proportional to the cutoff frequency, fT:12

where L is the transistor channel length. As the RF frequency of the device increases, the capacitance of the device must decrease, which ultimately lowers Idsat, the drain current at saturation, and decreases the RF output power. Higher output power can be achieved at lower microwave frequencies using semiconductor devices like GaN.

Improvements are being developed to increase the saturated output power of RF transistors by several orders of magnitude. The key areas are devices with higher breakdown and drain voltages and current, with increased integrated circuit power combining. The next generation of products leveraging these high-power, solid-state amplifiers has the potential to revolutionize commercial and government EMP applications. Considering the historical overview discussed here, solid-state electronic power density has been on the rise for decades, with substantial increases to come.

The authors would like to acknowledge Avi Bar-cohen, in memoriam, who made a tremendous impact in this field.