We use cookies to provide you with a better experience. By continuing to browse the site you are agreeing to our use of cookies in accordance with our Privacy Policy.
Home » 8-Channel Attenuator Ready for Wi-Fi 6E Testing
Broadband Channel 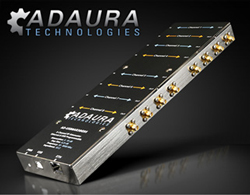 As Wi-Fi 6E quickly follows Wi-Fi 6, device manufacturers are gearing up to provide the many benefits it will offer. The new IEEE wireless standard adds non-overlapping channels and access to the 6 GHz band with 1200 MHz of contiguous spectrum. This has the potential to vastly improve network efficiency and increase throughput per user 4x in signal-congested areas. Wi-Fi 6E also consumes less power, which should prolong battery life in mobile devices.

With these advantages in mind, AdauraTech developed its eight-channel programmable attenuator for high performance RF design and testing. From 50 MHz to 8 GHz, the AD-USB8AR38G95 provides 95 dB attenuation with a resolution of 0.25 dB and greater than 120 dB of interchain isolation. The frequency range exceeds the 7.125 GHz upper threshold of the unlicensed 6 GHz band recently approved by the FCC for Wi-Fi 6E, making the programmable attenuator well suited for the latest generation of Wi-Fi MIMO testing, as well as sub-6 GHz cellular (3G, 4G, 5G) and IoT.

Each of the eight channels can be controlled discretely, with control and power via a built-in USB connection or integrated power over Ethernet port. AdauraTech’s “zero software” platform streamlines setup and control using a browser-based graphical interface, with HTTP REST commands and direct Telnet connections requiring no additional software or drivers. The R3 series is agnostic of the operating system, working equally well with Windows, Linux or macOS.