We use cookies to provide you with a better experience. By continuing to browse the site you are agreeing to our use of cookies in accordance with our Privacy Policy.
×
Home » 1/4 W Cellular PAs: Linear Without DPD or CFR 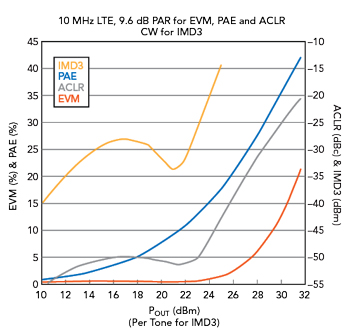 Guerrilla RF is introducing a family of 10, 1/4 W linear power amplifiers (PA), part of the company’s expansion into the cellular market (see Table 1). These new InGaP HBT amplifiers were designed specifically for 4G and 5G wireless infrastructure applications requiring exceptional native linearity over temperatures from -40°C to 85°C. The GRF55xx family covers the primary 4G and 5G cellular bands between 660 and 3,800 MHz. When amplifying a 10 MHz LTE waveform, each device delivers 24 dBm of linear power over the entire temperature range while maintaining an adjacent channel leakage ratio (ACLR) better than -45 dBc, error vector magnitude (EVM) less than 1 percent, third-order intermodulation (IMD3) under -20 dBm and power-added efficiency (PAE) greater than 15 percent - without the aid of supplemental linearization schemes like digital predistortion (DPD) or crest factor reduction (CFR). Figure 1 shows the native ACLR, EVM, IMD3 and PAE versus output power of the GRF5507, a PA covering the 699 to 798 MHz cellular band.

The ability to beat the -45 dBc ACLR performance metric without DPD or CFR is critical for cellular systems like home and commercial repeaters and boosters, femtocells, picocells and cable loss compensators that feed automotive “shark fin” antennas. With each of these, the sensitivity to cost, power and size prohibits using elaborate linearization like DPD and CFR. Instead, designers must rely on the power amplifier’s native linearity to meet the stringent emissions mask requirements imposed by the 4G and 5G standards.

Although these MMICs are well suited for non-DPD applications, they are also compatible with transmitters where supplemental linearization is available. When used with DPD and CFR, the GRF55xx PAs yield another 2 to 3 dB of output power while maintaining ACLR better than -45 dBc. In such applications, the ¼ W family effectively provides 1/2 W output power with efficiencies of 25 to 30 percent. Figures 2 and 3 show the GRF5510 PA’s native ACLR and EVM performance and improvements using DPD and CFR. The GRF5510 MMIC covers the 880 to 960 MHz cellular band. 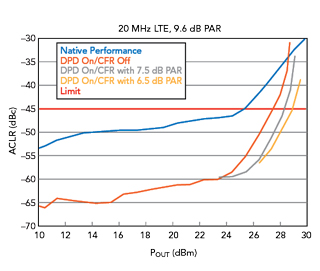 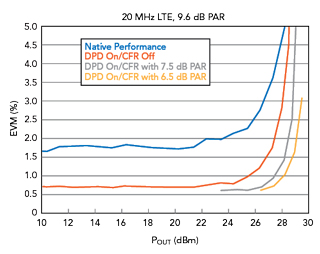 During the development of the GRF55xx series, Guerrilla RF consulted with its customers to ensure the devices in the family deliver the best blend of power and linearity to maximize the effective range and throughput for their cellular systems. The designs tune the internal harmonic terminations of each device to achieve the best native linearity, and these specialized harmonic matches drove the need for a family of amplifiers, each one tuned for a cellular band. Despite the unique tuning, each PA in the family has a common pinout and footprint, enabling coverage of many cellular bands using a single printed circuit board (PCB) layout.

In addition to its excellent native linearity, the GRF55xx series is exceptionally rugged. Design enhancements were implemented on each stage to ensure the devices are resilient to poorly matched loads. This is critical for applications where the load can be inadvertently compromised, like disconnecting an antenna and exposing the final stage to VSWRs much greater than 2:1. Ruggedness testing of each member of the family validated that when the PAs are subjected to extreme 8:1 VSWR loads, they will sustain input drive levels as high as 10 dBm on the sub-1 GHz designs and up to 23 dBm on the mid-band family (see Figure 4). The data points represent survivable operation when the PA is subjected to an 8:1 VSWR load swept through all phase angles and over the full -40°C to +85°C operating temperature range. 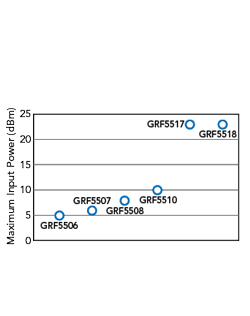 Figure 4 Maximum survivable input power with up to 8:1 output VSWR.

With the previously released 5 W GRF5504/9 PA series, these new ¼ W MMICs serve as the beachhead for Guerrilla RF’s expansion into the growing 5G PA market. Production samples and evaluation boards are available now for the low- and mid-band products, with the remaining members of the family coming by year-end. Each PA in the GRF55xx family is assembled in a pin-compatible, 3 mm x 3 mm, 16-pin QFN package. The common footprint enables a single PCB design to address multiple bands simply by swapping the PA MMIC.