We use cookies to provide you with a better experience. By continuing to browse the site you are agreeing to our use of cookies in accordance with our Privacy Policy.
Home » COMSOL Multiphysics® Version 5.6 to Be Released in Fall 2020
Industry News Software/EDA Channel

COMSOL Multiphysics® Version 5.6 to Be Released in Fall 2020 Clip Planes, Solver Efficiency for Multicore and Cluster Computations and Improved Handling of CAD Assemblies
Clip planes are one of several foundational upgrades to the already powerful COMSOL graphics rendering engine and enable much easier selection of boundaries and domains inside of complex CAD models. Other graphics news in the new version include visualizations that are partly opaque and partly transparent; realistic material rendering of, for example, steel, glass and water; and the ability to make imported images part of a visualization. 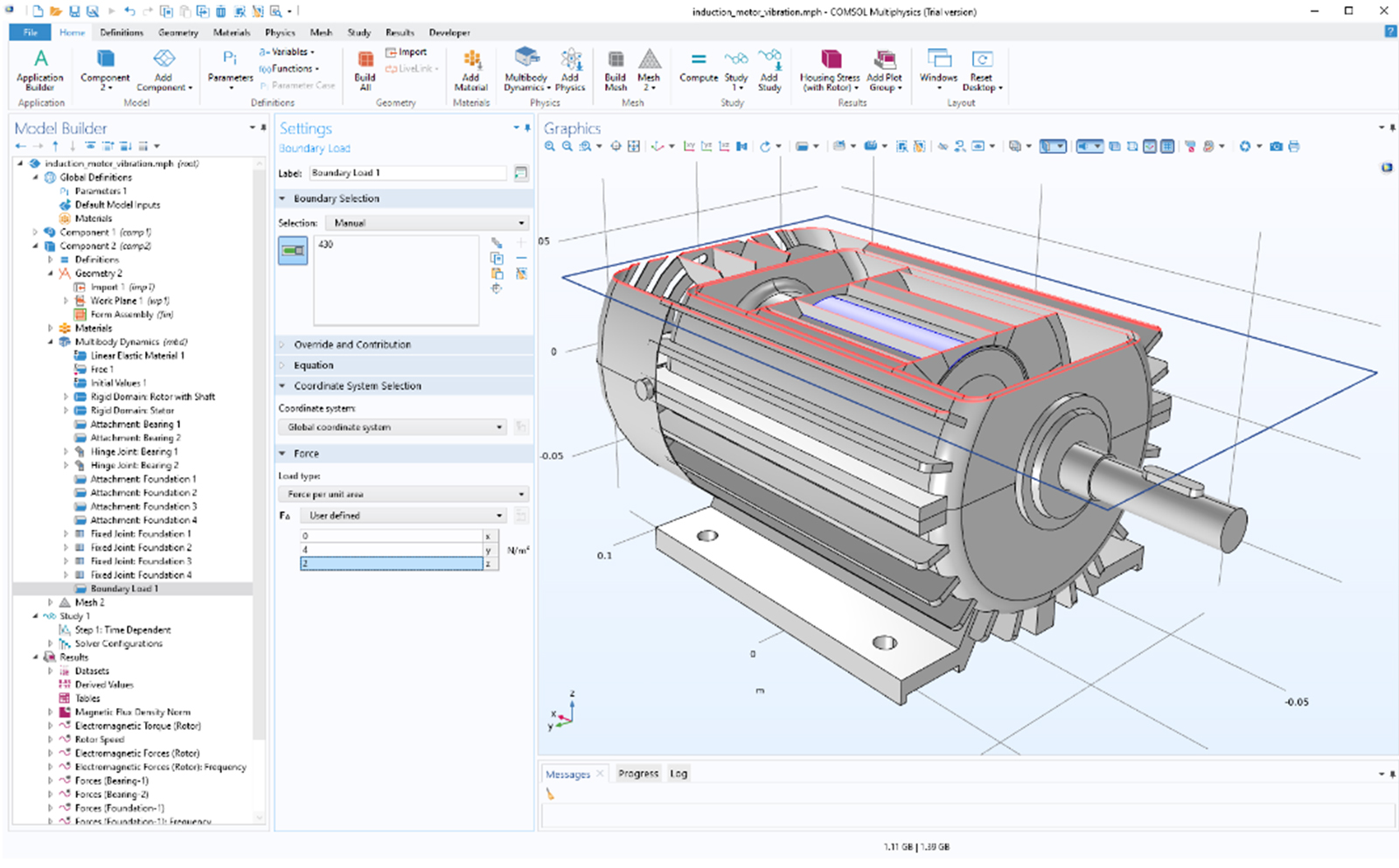 The solution time has decreased by 30 percent or more for many types of simulations. The solvers are significantly more efficient with respect to computation time and memory usage for multicore and cluster computations. Handling of larger CAD assemblies has improved with more robust solid operations and easier detection of gaps and overlaps in assemblies.

Application Templates and Control Knobs
New application templates, available in the Application Builder, which is integrated in COMSOL Multiphysics, provide standardized layouts that include input fields, buttons, ribbon tabs and graphics windows with options for desktop, tablet and smartphone layouts. A template wizard guides the user to create an organized user interface based on any COMSOL Multiphysics model. In the Application Builder, the suite of user interface elements, or form objects, has been extended with knobs that can be controlled by dragging and rotating with the mouse pointer or touch input. 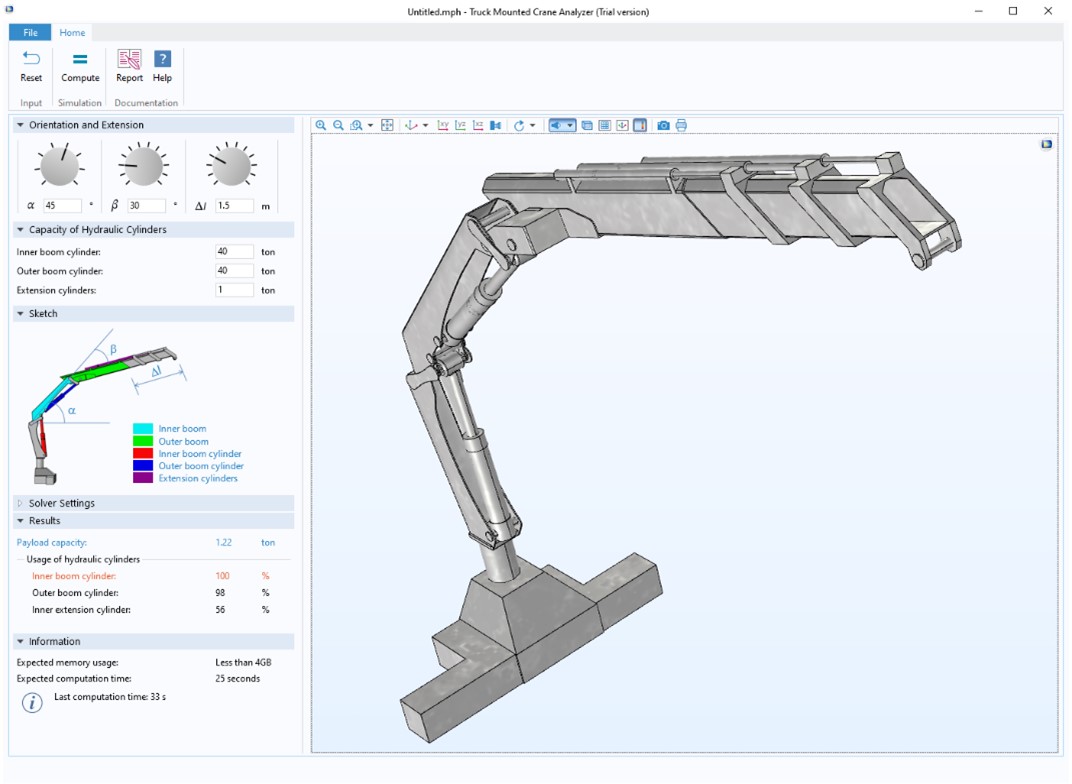 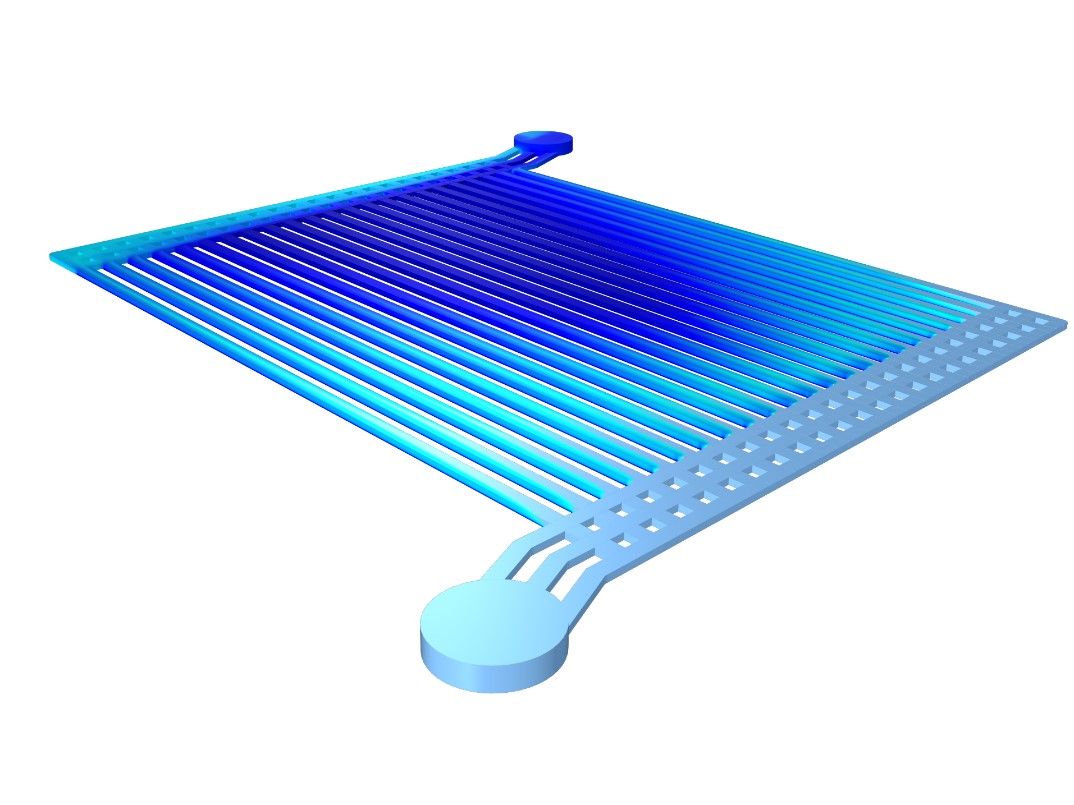 Introducing the Polymer Flow Module
With the new Polymer Flow Module, modeling and simulation can be used to design and optimize processes involving non-Newtonian fluids, ensuring the quality of these fluids within the polymer, food, pharmaceutical, cosmetics, household and fine chemicals industries. The new module can account for a multitude of multiphysics effects. Examples include when the properties of a fluid vary as a function of temperature and composition, to model curing and polymerization, or when a non-Newtonian fluid affects a mechanical structure, such as for a biological fluid moving through a peristaltic pump.

Introducing the Liquid and Gas Properties Module
The new Liquid and Gas Properties Module is used to compute properties for gases, liquids and mixtures such as density, viscosity, thermal conductivity and heat capacity as functions of composition, pressure and temperature. Having high-quality fluid and fluid mixture properties allows for more realistic acoustics, CFD, chemical and heat transfer simulations.

Faster and More Memory-Efficient Solvers for a Wide Range of Applications
Users working with large models having millions of degrees of freedom have seen great improvements in solver performance over the last few versions of COMSOL Multiphysics. In version 5.6, the general performance improvements give around a 50 percent decrease in assembly and solution time for midsized benchmark models. For performance on clusters, the finite element assembly and solution time has decreased by 30 percent for many types of analyses. Another improvement for users running on clusters includes an upgraded domain decomposition method that can now be used for a wider range of simulations. For acoustics simulations, a new boundary element method formulation enables analyses of an order of magnitude larger acoustic volumes. For CFD simulations, the solution time on clusters has decreased by about 30 percent using iterative solvers and about 50 percent using domain decomposition. A new eigenvalue solver called FEAST, well suited for parallel computations, has several important uses, including mode analysis for optical waveguides and laser cavities. In the Optimization Module, a new general-purpose, gradient-based solver called IPOPT has important applications in, for example, shape optimization.

Laminated Iron Cores, Parasitic Inductance and Ferroelectric Materials
The material library included with the AC/DC Module has been extended to include 322 magnetic materials from Bomatec. The material data includes several types of permanent magnets, such as NdFeB, SmCo, and AlNiCo, with electromagnetic- and temperature-dependent properties. The AC/DC Module now provides specialized tools for the extraction of parasitic inductance with L-matrix computations, which is essential to printed circuit board design. For nonlinear magnetic analysis, laminated iron core losses in electric motors and transformers can now be accurately represented using a new set of nonlinear material models. A new option for resonance frequency computations makes this important functionality available in the AC/DC Module with functionality for coupled finite element and electrical circuits eigenfrequency computations. This enables computation of low to medium resonance frequencies of coils and other inductive devices. A new advanced ferroelectric material model for electrostatics makes it possible to analyze dielectric materials with polarization saturation and hysteresis, with applications for ferroelectric capacitors and energy harvesting devices.

Fast Port Sweeps and Scattering
The RF Module and Wave Optics Module provide a new option for port sweeps, enabling faster computations of full S-parameters or transmission and reflection coefficient matrices. This functionality can be applied to the analysis of passive 5G components such as microwave filters with a large number of ports. A new modeling tool for approximate asymptotic scattering allows for quick far-field and radar cross section (RCS) analysis for convex-shaped objects. A new set of postprocessing tools makes it easier to visualize and analyze polarization, with important applications for a variety of periodic structures including metamaterials for optics and microwaves. The new version of the Ray Optics Module includes faster ray tracing and specialized tools for scattering from surfaces and within volumetric domains. 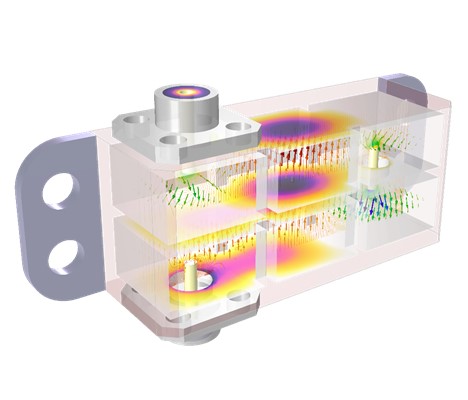 For fluid flow in porous structures, the pore pressure causes mechanical stresses and the volume changes may affect the flow in a strongly coupled fashion. In the Composite Materials Module, the functionality for analyzing such poroelastic effects has been expanded to include composite shells. Applications include the simulation of layered soil, paperboard, fiber-reinforced plastic, laminated plates and sandwich panels.

The suite of nonlinear multiphysics material models in the MEMS Module now includes ferroelectric elasticity, which can be used for modeling nonlinear effects in piezoelectric materials such as hysteresis and polarization saturation. This functionality is also available by combining the AC/DC Module with either the Structural Mechanics Module or the Acoustics Module. 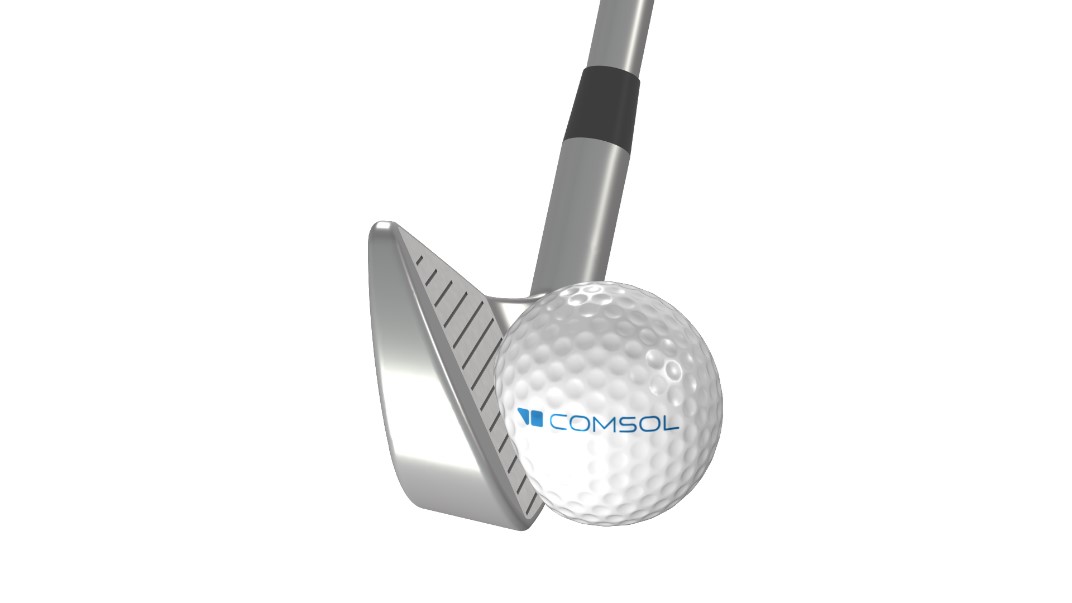 Nonlinear Acoustics, Mechanical Ports, and Improved Room Acoustics Analysis
With the addition of nonlinear acoustics capabilities, users of the Acoustics Module can simulate high-intensity focused ultrasound for use in noninvasive therapeutic medical applications as well as ultrasound imaging. The new version also allows for analysis of sound distortion in mobile device loudspeakers that may be caused by nonlinear thermoviscous effects. New mechanical port conditions, available in the Structural Mechanics Module, Acoustics Module and MEMS Module, make it easier to analyze vibration paths and mechanical feedback in applications having propagation of ultrasonic elastic waves, such as ultrasonic sensing and nondestructive evaluation. Engineers working with improving the sound quality of rooms and concert halls will appreciate the new room acoustics metrics available in the Acoustics Module, including reverberation time, definition and clarity based on ray acoustics simulations. In addition, the new version provides faster impulse response for ray acoustics. A new boundary element method formulation enables analyses of an order of magnitude larger acoustic volumes with applications within, for example, sonar research and development. 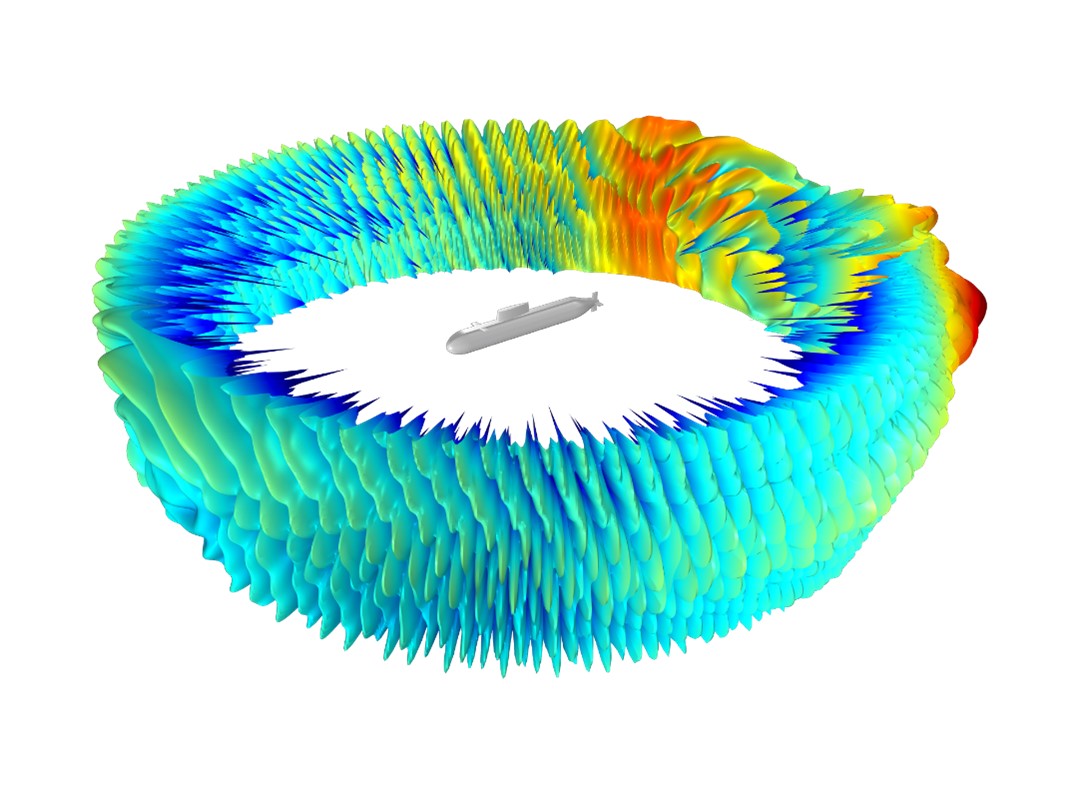 Shallow Water Equations and Directional Surface Properties for Heat Radiation
Researchers and engineers working with hydrological applications will benefit from the new option for simulating the shallow water equations now available in the CFD Module. The new functionality solves for water depth and momentum with an option to use a digital elevation map (DEM) to specify the seafloor topography. In all add-on products with support for porous media flow, new centralized handling of porous media properties gives users a much better user experience for multiphysics simulations of porous media. The Particle Tracing Module has new functionality for droplet evaporation, which is important for understanding the spread of contagions as well as a range of industrial processes. In the Heat Transfer Module, new functionality for surface-to-surface radiation enables defining surface properties that are sensitive to the direction of heat radiation. Applications include radiation simulations involving surfaces that have a texture or pattern that is reflecting and absorbing heat radiation differently in different directions; for example, the passive cooling of solar panels. A new modeling tool for phase change interfaces makes it possible to simulate freeze-drying processes.

Material Library for Corrosion and Automatic Reaction Balancing
The Corrosion Module now includes a material library with more than 270 instances of polarization data used to predict where there is risk for corrosion or hydrogen embrittlement due to hydrogen evolution in a structure. The Chemical Reaction Engineering Module features a new tool for automatic reaction balancing with stoichiometric coefficient calculations as well as three predefined thermodynamic systems. The predefined systems have a wide range of applications including dry air, moist air, and water-steam mixtures. In the Chemical Reaction Engineering Module, a new reactive pellet bed modeling tool enables multiscale modeling of pellet beds with macroscale mass transport in pores and microscale transport in spherical pellets. The new reactive pellet bed functionality supports a variety of diffusion models and arbitrary reaction kinetics with applications in, for example, catalytic converters in auto exhausts used to break down polluting gases such as nitrogen oxides.