We use cookies to provide you with a better experience. By continuing to browse the site you are agreeing to our use of cookies in accordance with our Privacy Policy.
×
Home » Pillars of 5G: Spectral & Energy Efficiency
4G/5G/Cellular 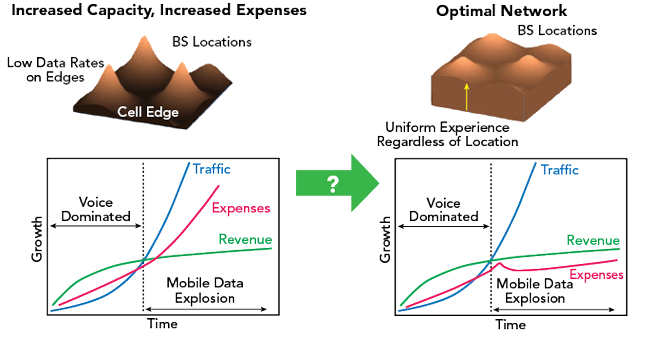 In the past generations of mobile technology, the cost of the provision of higher capacity was almost directly proportional, as this involved building more base stations or increasing the spectral bandwidth (BW) inside the network. While this was roughly sustainable in the past, the demands for 10 to 100x the capacity of 4G networks make this approach a path to bankruptcy, as it is unlikely the consumers of the increased capacity are willing to increase their expenditure by 10 to 100x. As illustrated in Figure 1, in order to advance the mobile networks, the industry needs to solve the problem of how to increase capacity across the entire network while simultaneously decreasing the costs of running the network.

HOW MUCH DOES IT COST TO RUN A CELLULAR NETWORK?

Although the base stations have become more energy efficient from 2G to 4G, the costs of providing more capacity through network densification have increased significantly (see Figure 2). Most of the cost of setting up and operating a cellular network is in the remote provision of air conditioning and site rental for the base stations.1-2 In terms of the initial CAPEX, the air conditioning is over 50 percent, leaving the remaining for the base station equipment. Similarly, in terms of recurring OPEX, electricity is almost 50 percent of the costs. Most of the electricity is for the operation of the remotely distributed air conditioning network used to cool the baseband processors (radio units are typically air-cooled and do not require additional air conditioning). The actual transmission of energy is only 7 percent of the OPEX. If more base stations are deployed, the 30 percent of site rent scales accordingly, making it unattractive to simply deploy more base stations (this could become a problem for 5G FR2 with reduced cell sizes compared to 5G FR1).

From the analysis of the power consumption, it is clear that most of the costs are due to the distributed and remote deployment of air conditioning for the baseband processing portion of a base station. China Mobile proposed to centralize the baseband processing in a manner similar to data storage facilities for the internet. Figure 3 illustrates the architecture of the baseband cloud where each baseband for a base station becomes a virtual machine inside the cloud (C-RAN). Even traditionally separate network appliances such as gateways can be integrated into the cloud as virtual machines. By centralizing the baseband processing, the remote air conditioning becomes centralized, thereby significantly decreasing both OPEX and CAPEX. In addition, it is easier to realize CoMP where separate base stations transmit to a mobile phone (network MIMO) with a centralized control, increasing the spectral efficiency at the same time. This architecture is independent of the Radio Access Network and can be used to control a mixed generation cellular network. 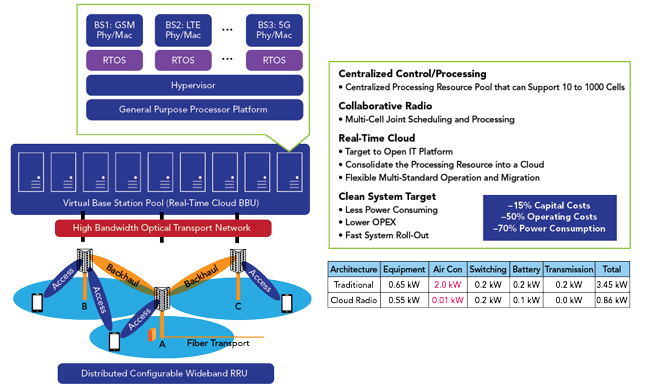 The type of information being transmitted also influences the energy efficiency of the network. As shown in Figure 2, different types of data have different data packet to signaling packet ratios (DSR). A low DSR represents a low usage of the channel to transmit data; for example, text messages which represent 60 percent of all network traffic have a DSR between 1 to 3 whereas photos and videos are more energy efficient as this data requires fewer signaling packets. 5G FR1 addresses this problem by adjusting the subcarrier spacing to allow different types of data to more efficiently use the available channel capacity.

WHAT DETERMINES THE CAPACITY OF A NETWORK AND HOW CAN IT BE INCREASED?

In the early 1900s, two researchers working independently derived a relatively simple equation that serves as a Moore’s Law for the wireless industry: the Shannon-Hartley theorem. This theorem gives an upper bound to the amount of information that can be transmitted over the wireless channel where the individual channel capacity is dependent on only two parameters: channel BW and the signal-to-noise-ratio (SNR). While the capacity scales linearly with the channel bandwidth, it only scales at log2 for the signal to noise ratio:

From the Shannon-Hartley theorem, there are three basic methods to increase network capacity (see Figure 4):

IMPROVEMENT OF ENERGY EFFICIENCY WITH BEAMFORMING

In a traditional cellular network, a cell is associated with a base station that transmits energy throughout a wide area (typically 120 degrees angular arc in front of the base station). While some of this energy is received by users within the base station’s cell, the vast majority of this energy is absorbed into the environment (buildings, people, trees, cars, etc.). This wasted power represents a reduced energy efficiency and higher network OPEX (see Figure 5). If the single base station antenna is replaced by 120 antennas that target the energy to individual users, the required base station power is decreased to 0.1 percent of the original output power.3 This reduction, however, is theoretical. Practically, the output power for the same capacity only decreases to 30 percent of the original power due to the efficiency and losses of the RF components inside the base station.

In order to form a beam, a set of periodically spaced antennas can form a beam in any direction by only changing the phase differences between the antennas (see Figure 6). Typical antenna array spacing is half wavelength, leaving the beam angle (θ) directly related to the phase difference between the antennas: θ ∝ sin-1(Δφ). While the beam can focus its energy in a desired direction, there is also energy going in other directions (sidelobes and backlobes). This additional energy represents interference to other users inside a base station cell. This effect can be mitigated by either ensuring the adjacent users are in the nulls of the main beam or by weighting the individual antennas with an amplitude distribution to lower the energy in the sidelobes (see Figure 6).