We use cookies to provide you with a better experience. By continuing to browse the site you are agreeing to our use of cookies in accordance with our Privacy Policy.
×
Home » mmWave and THz Gain Compression and Active Load-Pull
Test and Measurement Channel 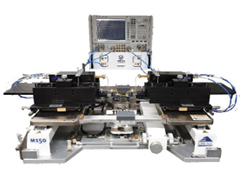 Anyone who has worked above 110 GHz will likely agree that performing device characterization measurements at mmWave and sub-THz frequencies is no simple task and can be challenging. First, commercially available waveguide extenders between 110 GHz and 1.1 THz tend to have a fixed output power or a limited range of powers, which are set manually through an integrated or external variable attenuator. This makes it difficult to accurately and repeatably set the power to an arbitrary value at the device under test (DUT) reference plane and limits the range of the available powers. A device’s operating conditions are largely defined by its input power, and controlling the power is critical when characterizing its performance over a range of powers and plotting its large-signal gain compression.

Second, load-pull—presenting a user-defined arbitrary impedance or set of impedances to the output of a device—is not readily available above 110 GHz. Even though passive mechanical tuners can be built at these higher frequencies, the ability to present high reflections (i.e., gammas and mismatches) at the DUT reference plane is limited by waveguide and probe losses between the tuner and DUT, making the measurement less meaningful. Higher gamma load-pull measurements are an important tool for transistor designers to characterize and model the behaviors of the device. For circuit designers, load-pull measurements are used to determine the ideal matching conditions and optimize performance at powers where every fraction of a dB is important.

To overcome these challenges, Maury Microwave and Vertigo Technologies have released a suite of software and hardware tools enabling high-resolution gain compression and active load-pull measurements at mmWave and sub-THz frequencies to 1.1 THz. MMW-STUDIO is an upgrade to a traditional mmWave or sub-THz S-parameter measurement system, consisting of a low frequency vector network analyzer (VNA) and waveguide extenders, enabling high-resolution power control and arbitrary impedance control for complete device characterization.

MT920A MMW-STUDIO is a software module that works with waveguide-banded mmWave VNAs, adding accurate, repeatable and high-resolution power control. The software enables the direct measurement of vector-corrected power at the DUT reference plane, as well as controlling the power delivered to the DUT. This provides the capability to perform gain compression power sweep measurements over the available power levels and perform S-parameter measurements at any arbitrary power level.

MMW-STUDIO supports most commercial waveguide extenders up to 1.1 THz, enabling users to perform: 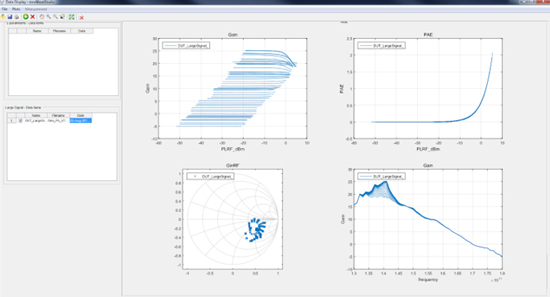 Figure 1 MMW-STUDIO display showing a large-signal power sweep measurement of a two-stage power amplifier at multiple frequencies from 130 to 180 GHz.

MT920B MMW-STUDIO LP is a software add-on that controls the magnitude and phase of the signals delivered to the input and output of the DUT when used with a vector modulation unit (VMU). By setting arbitrary impedances, the system will perform active load-pull measurements, where the magnitude of the reflection presented to the DUT is achieved by controlling the reflected a2 wave and setting Γ = a2/b2. By providing arbitrary impedance control and active load-pull, the MMW-STUDIO LP option adds the capability to perform large-signal measurements (i.e., Pout, Pin, Pavs, Gt, Gp, Eff, PAE, Vin, Vout, Iin, Iout) at any controlled load impedance.

Figure 2 shows a typical mmWave load-pull measurement with nested power sweep using MMW-STUDIO LP. The screen shot shows the performance of a 130 nm SiGe HBT characterized over 15 loads with an input power sweep from −30 to −2 dBm. The measurements include power gain versus the power delivered to the load, PAE versus the available input power, measured load impedances and PAE contours at 1 dB compression. 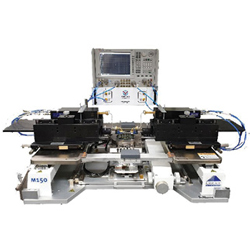 MMW-STUDIO and MMW-STUDIO LP provide the capability for conventional waveguide-banded mmWave VNA systems to perform large-signal characterization, including power and active load-pull, without using power meters, passive impedance tuners or additional test-sets. The approach uses the large dynamic range and high speed of the VNA’s receivers, with a seamless setup and user experience. Using this capability, designers can: