We use cookies to provide you with a better experience. By continuing to browse the site you are agreeing to our use of cookies in accordance with our Privacy Policy.
Home » 3D-printed RF components and New Optical Technology Will Impact Future SATCOM Market
Aerospace and Defense Channel

Companies such as Harris Corporation (US) and Nano Dimension (Israel) have invested in the development of 3D-printable RF systems for satellites. According to Dr. Arthur Paolella, a senior scientist for Harris Space and Intelligence Systems, 3D printing of RF systems offers several potential advantages, such as faster production rate, high performance, and the ability to print complex shapes and conformal systems that traditional manufacturing cannot achieve. The European Space Agency (ESA) is working toward improving satellite communication systems in space by incorporating laser communication technology. 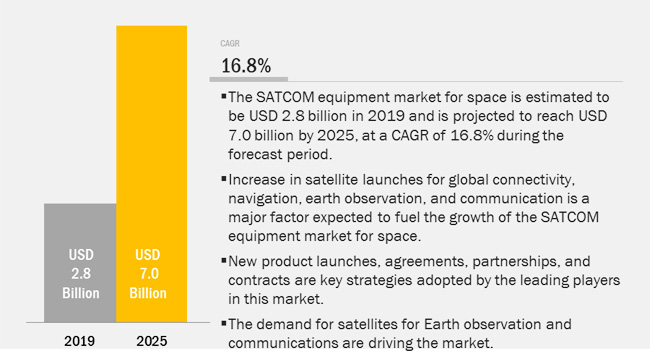 According to MarketsandMarkets™, the SATCOM Equipment market for space is projected to grow at a CAGR of 16.8% during the forecast period. The growth of this market is expected to be directly affected by a number of factors such as the rise in the launch of small satellites; increased spending on space programs by countries such as the US, China, and India; and growing need for global connectivity and satellites for media & entertainment. There are various opportunities for companies to provide innovative products to satellite makers due to the introduction of 5G, 3-D printing, and the development of optical communications. However, the market is restrained by rules and regulations laid down by various government and space agencies.

The 3D printing of satellite parts will become an increasingly important part of the overall Low Earth Orbit (LEO) economy. Harris Space and Intelligence Systems have recently invested in developing a 3D printed RF circuit for space applications. The use of 3D printing could prolong the life of satellites in orbit. Additionally, spare parts could be printed on the International Space Station, and satellite repairs could take place in space.

Gallium Nitride (GaN) In the SATCOM Equipment for Space:

Solid-state technologies, such as GaN, are transforming satellite communications. The advantage of using GaN in satellites is that it offers high RF power output with relatively low DC power consumption. It also has high reliability and a small form factor. These factors help reduce system weight.

Satellite antennas are among the most important pieces of equipment in a satellite; they are responsible for receiving and transmitting data back to Earth. Most satellites operate in the Ku-band spectrum. The development of omnidirectional and circularly polarized slotted antennas offers improvements on existing antenna designs, such as transferring signals in an isotropical manner.

According to an article published in March 2019 by Earth & Science News, circularly polarized antennas allow for a strong signal for communications even if there is a disturbance in the atmosphere caused by electromagnetic fields.

Modular SSPAs are mission-critical components. They are critical for the operation of military amplifier systems. Modular SSPA can provide higher levels of system reliability in comparison with traveling wave tube amplifiers. Using a basic RF architecture for SSPA based on a parallel module design approach, four SSPA modules are combined to give the desired output power level. The advantage of a modular SSPA is that there is no single point of failure in any active component. If one module fails, the SSPA can still operate at reduced power. The modules can be replaced in the field, which makes system maintenance fast.

The use of laser technology for inter-satellite communication is a new, disruptive communications technology in the satellite industry. Laser communications could potentially replace the entire current RF-based market. However, it will take several years before the technology becomes viable for use in terms of price, capability, reliability, and regulations.