We use cookies to provide you with a better experience. By continuing to browse the site you are agreeing to our use of cookies in accordance with our Privacy Policy.
×
Home » Adopting the 64 to 71 GHz Band for Fixed Wireless Applications

Adopting the 64 to 71 GHz Band for Fixed Wireless Applications

The 60 GHz band (57 to 64 GHz) has long been recognized as ideal for dense urban data networks because of its large capacity combined with excellent spectrum reuse, due to oxygen absorption. The use of phased array antenna technology enables novel mesh network architectures and significantly reduces the size and cost of equipment, compared to conventional fixed antenna technology, but its reduced range limits some applications. Recent regulatory decisions have opened up additional spectrum from 64 to 71 GHz. This article explores the absorption characteristics across the newly widened band and discusses the applications enabled by commercial transceiver RFICs covering the expanded frequency range from 57 to 71 GHz. 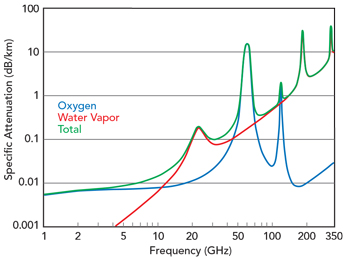 Figure 1 Specific attenuation vs. frequency from 1 to 350 GHz.

National regulators, responsible for allocating spectrum to different users, must balance competing commercial and government interests. The frequency allocations that the regulators make are determined by the type of application and its needs, such as bandwidth and propagation. The historic use of the band must also be considered. As spectrum needs are common among nations, and spectrum usage has spillover effects across borders, spectrum allocation is necessarily harmonized at the supra-national level by organizations such as the European Conference of Postal and Telecommunications Administrations (CEPT) and the International Telecommunication Union (ITU).

Bands with impairments - such as high attenuation due to water or oxygen absorption - are typically less useful for traditional communications applications. Therefore, regulators have opened them with the intent to enable new applications. The results are often unexpected and transformational: think of cordless phones in the 900 MHz band and Wi-Fi at 2.4 and 5 GHz. Regulators evaluated the same considerations when they allocated the 60 GHz band for unlicensed use. 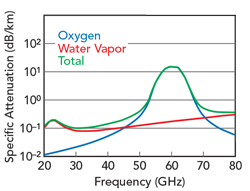 Figure 2 Specific attenuation from 20 to 80 GHz.

To assist with spectrum allocation, the ITU has published ITU-R P.676-11, “Attenuation by Atmospheric Gases,” which estimates the attenuation due to oxygen and water vapor under different conditions and across the frequency range from 1 to 350 GHz (see Figure 1). Annex 2 of the recommendation provides a simplified approximate method to estimate gaseous attenuation applicable to the full frequency range. The 57 to 64 GHz band coincides with an oxygen absorption peak, which reaches a maximum of approximately 15 dB/km at 60 GHz (see Figure 2, which shows more detail). The attenuation in this band is substantially greater than observed for other bands in the low mmWave part of the spectrum, which makes it ideal for short-range applications.

CHARACTERISTICS OF THE 57 to 64 GHz BAND 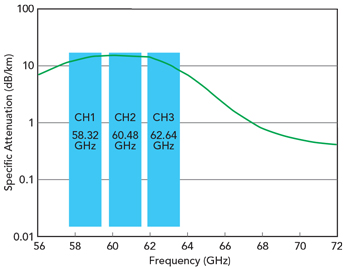 Allocating a substantial contiguous band enables it to be divided into multiple wide channels, which provides for very high data capacity. For example, by using the IEEE 802.11ad channelization, which divides the band into channels of 2.16 GHz with an occupied bandwidth of 1.76 GHz, bit rates up to 4.62 Gbps using 16-QAM single carrier modulation and 8.085 Gbps using 64-QAM single carrier modulation can be achieved. As noted, the 57 to 64 GHz band coincides with the oxygen absorption peak, with a maximum of approximately 15 dB per kilometer at 60 GHz. Figure 3 overlays the atmospheric attenuation for 802.11ad channels 1 through 3, showing the attenuation peaks in channel 2. Channels 1 and 3 experience similar attenuation, meaning the impact on link range is broadly the same for all three channels.

The maximum distance for a radio link to be reliably operated is defined as the point where the system gain - the transmit power measured as EIRP minus the nominal receiver sensitivity - equals the loss from atmospheric attenuation plus effects such as the absorption by rain or reflections from the ground, buildings or other objects. For this analysis, assume rain losses for rain zone K (e.g., Chicago, Beijing or New Delhi) and availability of 99.9 percent, per ITU recommendation ITU-R PN.837-1, “Characteristics of Precipitation for Propagation Modeling.”

For phased array implementations, the maximum average EIRP is typically limited by regulation to 40 dBm. The receiver’s sensitivity is derived from the per-element sensitivity and the gain of the antenna array. In this example, an array of 16 receive (Rx) elements is modeled, using the performance of a commercially available transceiver RFIC (see Sidebar, pg. 82) connected to antennas with a per-element gain of 11 dBi. In principle, RF transceiver ICs can be tiled for greater performance; however, as the transmit power often reaches the regulatory cap, the benefit of tiling is mainly in receiver sensitivity. For a link operating in channel 2, the maximum link distance with a single transceiver using various modulation and coding schemes (MCS) is shown in Table 1. The high specific attenuation in these channels yields relatively short link distances, especially at the higher bit rates requiring higher order modulation. 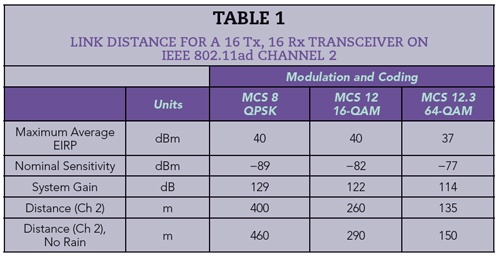 The range of the link corresponds to one or two city blocks, ideal for dense networks in urban areas where nodes are closely spaced in point-to-multipoint (PTMP) or mesh architectures. With careful channel allocation, these links can reuse the spectrum across an urban area without self-interference or causing interference to other networks. This capability enables a variety of use cases:

In its “Spectrum Frontiers Report and Order,” released on July 14, 2016 (FCC 16-89), the FCC opened the 64 to 71 GHz band for use by unlicensed devices, adopting the same technical standards set for the 57 to 64 GHz band, defined in section 15.255 of the FCC rules. The FCC noted the agency’s action created a 14 GHz segment of contiguous spectrum to “encourage the development of new and innovative unlicensed applications and promote next-generation, high speed wireless links with higher connectivity and throughput, while alleviating spectrum congestion from carrier networks by enabling mobile data off-loading through Wi-Fi and other unlicensed connections.”

Ofcom, the U.K. regulator, conducted a “Fixed Wireless Spectrum Strategy” consultation in early 2018, resulting in a decision in July 2018 making the 64 to 66 GHz band unlicensed (it was previously coordinated by Ofcom) and opening the 66 to 71 GHz band for unlicensed use for 5G-like fixed wireless and mobile use cases. The Ofcom decision makes the U.K.’s spectrum allocation aligned with the U.S. allocation. The Ofcom decision and submissions from other parties are currently being reviewed by CEPT ECC, with the possible adoption of the same spectrum allocations more broadly through revisions to the ECC recommendations. 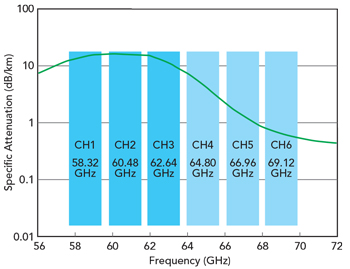 Using the same 802.11ad channel configuration, Figure 4 shows the atmospheric attenuation for the newly unlicensed spectrum and compared to channels 1 through 3. The attenuation in channels 4 through 6 is substantially lower than in the original unlicensed band, with the attenuation in channel 6 approaching 0.6 dB/km. Using the same system parameters described above, significantly longer link distances can be achieved. Table 2 compares the estimated link distances between channels 2 and 6, showing from a 50 percent increase for QPSK modulation to 11 percent for 64-QAM. The ability to support longer link distances of 300 to 400 m using channel 6 enhances the performance of existing applications and opens up new use cases: 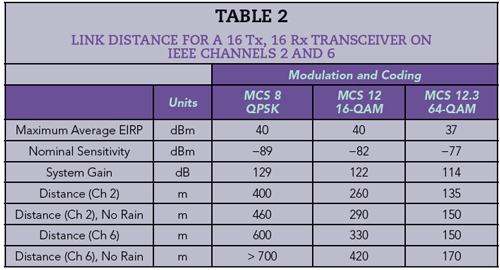 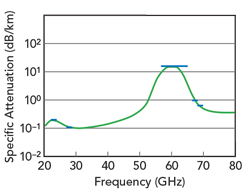 A network operator can now deploy a less dense network in the upper part of the unlicensed band, increasing density over time by adding new links at lower frequencies. This potential can significantly improve the economics of a fixed network, and transportation applications, which require support for mobility over relatively long distances, become practical.

Interestingly, the specific attenuation in channels 5 and 6 of the newly allocated spectrum is comparable to that of the 5G licensed bands at 26 and 28 GHz (see Figure 5). While higher output power is permitted in the licensed bands, overall system performance is limited by the narrower channels and the higher order modulation required. The 66 to 71 GHz unlicensed band may be an equivalent alternative to the licensed bands for fixed wireless applications.

The availability of wide channels in the unlicensed 57 to 64 GHz band with the development of products using phased array antenna technology has made the development of dense, high capacity urban networks using novel mesh architectures practical. The addition of 64 to 71 GHz to the unlicensed band, with its lower atmospheric attenuation, enhances the scope of existing applications and offers new possibilities, especially in the transportation sector. Silicon process nodes with mmWave performance enable companies such as the Sivers IMA to develop transceivers covering the full 57 to 71 GHz band. This capability allows network operators and other service providers to exploit the potential of the unlicensed band.

The 60 GHz Radio Market and Technology