We use cookies to provide you with a better experience. By continuing to browse the site you are agreeing to our use of cookies in accordance with our Privacy Policy.
×
Home » RF Transceivers Enable Forced Spurious Decorrelation in Digital Beamforming Phased Arrays

A technique to force spurious signals to be uncorrelated by offsetting local oscillator (LO) frequencies and digitally compensating for this offset is implemented and demonstrated.

In large digital beamforming antennas, dynamic range improvements through the beamforming process of combining signals from distributed waveform generators and receivers is highly desirable. A 10logN dynamic range improvement can be obtained in both noise and spurious performance if the associated error terms are uncorrelated. N in this case is the number of waveform generators or receiver channels. Noise by its nature is a random process and therefore lends itself well to the tracking of correlated and uncorrelated noise sources. Spurious however are signals. This makes it less obvious how to force spurs to be uncorrelated. Therefore, any design method that can force spurious signals to be uncorrelated is valuable in the phased array system architecture.

In this article we review a previously published technique to force spurious signals to be uncorrelated by offsetting the LO frequencies and digitally compensating for this offset. We then show how the most recent Analog Devices transceiver product, the ADRV9009, has built in features enabling this capability. We then conclude with measured data demonstrating the results of the technique. 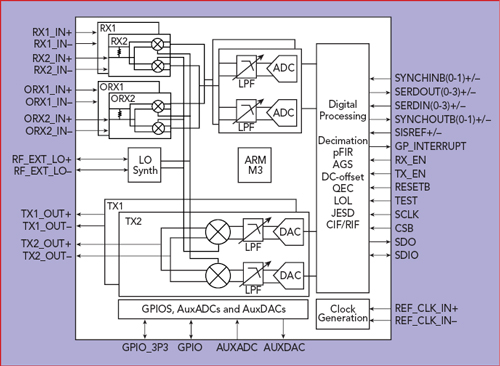 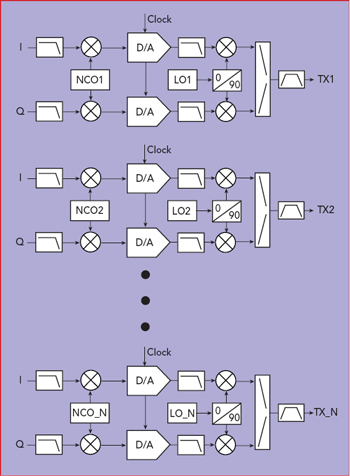 Figure 2 Forcing spurious to be uncorrelated by programming LO and NCO frequencies across an array of waveform generators. 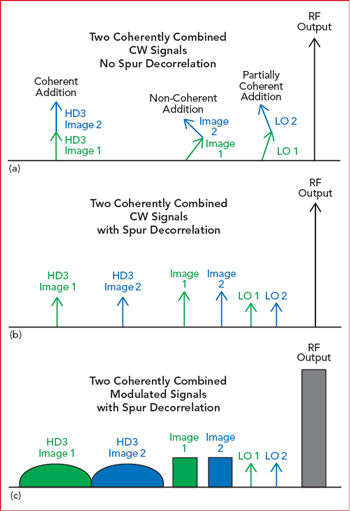 Various methods to force spurious decorrelation in phased arrays have been known for some time. The first known publication dates back to Howard et al. in 2002,1 where a general method is described. In the approach, signals are first modified in a known way from receiver to receiver. Then the signals become distorted by the receiver’s nonlinear components. At the receiver output, the modifications introduced earlier in the receiver are inverted. The intended signals become coherent or correlated, but the distorted terms are not restored. The modification method implemented in their testing was to set each LO synthesizer to a different frequency, then correct for the modification by digitally tuning numerically controlled oscillators (NCO) in the digital processor. Several other methods have also been published.2-4 Today, with the integration of full transceiver subsystems on a single monolithic silicon chip with embedded programmable features, the original spurious decorrelation method is readily enabled.

We describe the method and show data for an Analog Devices product, but the method is equally applicable to any transceiver array. A functional block diagram of the Analog Devices transceiver ADRV9009 is shown in Figure 1. Each waveform generator or receiver is implemented with a direct conversion architecture.5 The LO frequencies can be programmed independently on each IC. The digital processing section includes digital up/down conversion with NCOs that can also be programmed independently across ICs.6

To illustrate the concept in frequency, an example with two transmit signals from a direct conversion architecture is shown in Figure 3. In these cases, the RF is on the high side of the LO. In a direct conversion architecture the image frequency and third harmonic appear on the opposite side of the LO and are shown below the LO frequency. When the LO frequencies are the same frequency across channels, the spurious frequencies are also at the same frequencies as shown in Figure 3a. Figure 3b illustrates a case where LO2 is set at a higher frequency than LO1. The digital NCOs are equally offset such that the RF signal achieves coherent gain. The images and third harmonic distortion products are at different frequencies and thus uncorrelated. Figure 3c illustrates the same configuration as Figure 3b but adds modulation to the RF carrier.

An eight channel transceiver based RF testbed was assembled to evaluate the transceiver product line for phased array applications. The test setup for evaluating the waveform generators is shown in Figure 4. For this test the same digital data is applied to all waveform generators. A calibration is performed across the channels by adjusting the NCO phase to ensure the RF signals are in phase at the 8-way combiner and coherently combine. The transceivers share an LO within a two channel device (see Figure 1), so for the eight RF channels there are four different LO frequencies. 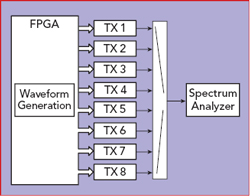 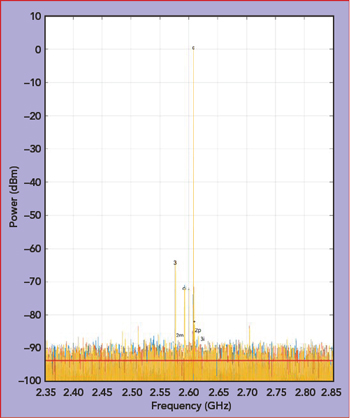 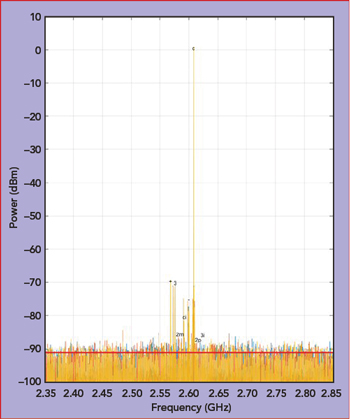 When a very small number of channels are combined, as was done in this test, the spurs actually show a 20log(N) improvement in their relative levels. This is due to the signal components combining coherently and adding as 20log(N) while the spurs do not combine at all. In practice, with a large array and a much greater number of channels being combined, the improvement is expected to approach 10log(N). This is for two reasons. First, with a large number of signals being combined it is not practical to spread the spurs out sufficiently such that each one can be considered in isolation. Consider a 1 MHz modulation bandwidth as an example. If a specification says that spurious emissions are to be measured in a 1 MHz bandwidth, then ideally, the spurs would be spread out so that they are at least 1 MHz apart. If this is not possible then each 1 MHz of measurement bandwidth will include multiple spurious components. Since these will be at different frequencies they will combine incoherently and the spurious power measured in each 1 MHz of bandwidth will increase as 10log(N). However, no single 1 MHz of measurement bandwidth will contain all the spurs, so in this case “N” for the spurs is smaller than “N” for the signal. Although the incremental improvement will be 10log(N), once N is large enough for the spurious density to place multiple spurs inside the measurement bandwidth, the absolute improvement will still be better than 10log(N) compared to the system without spurious signal decorrelation, i.e. it will be somewhere between 10log(N) and 20log(N) dB better. Secondly, this test was done with CW signals. Real world signals will be modulated and this will cause them to spread out, making non-overlapping spurious signals impossible to achieve when a large number of channels are combined. These overlapping spurious signals will be uncorrelated and add incoherently, as 10log(N), in the overlap region.

It is worth noting the LO leakage component when the LO is set to the same frequency across channels. LO leakage is due to imperfect cancellation of the LO in the analog modulator when two signal branches are summed. If the amplitude and phase imbalances are random errors then the phase of the residual LO leakage component will also be random and when many different transceiver LO leakages are summed they will add incoherently, as 10log(N), even when they are at precisely the same frequency. This should also be the case with the modulator’s image component but not necessarily the modulator’s third harmonic. With a small number of channels being coherently combined it is unlikely that the LO phases would be completely random and thus the cause for partial decorrelation shown in the measured data. With a very large number of channels LO phase approaches a much more random condition across channels and is thus anticipated to be an uncorrelated addition.

The measured SFDR results when LOs and NCOs are offset in frequency clearly show that the spurious created are all at different frequencies and are not coherent in the combining process, thus ensuring an SFDR improvement as channels are combined. LO and NCO frequency control is now a programmable feature in the latest Analog Devices transceiver products. The results demonstrate that this feature can be exploited in phased array applications ensuring an array level SFDR improvement over single channel performance.