We use cookies to provide you with a better experience. By continuing to browse the site you are agreeing to our use of cookies in accordance with our Privacy Policy.
Home » LAA/Wi-Fi Front-End Modules for Smartphones
Cellular 4G/LTE Channel

Increased adoption of smartphones coupled with data-heavy applications like video streaming are creating an explosion in mobile data rate consumption. To help deliver this data to mobile users, multiple technologies are being deployed. The primary platforms today are cellular and Wi-Fi. However, to support the demand for faster data, the industry must use additional spectrum and develop more spectrum-efficient technologies. One approach is a technology known as license assisted access (LAA), which taps unlicensed spectrum to increase cellular data rates.

Figure 1 Unlicensed spectrum between 5 and 7 GHz.

The unlicensed spectrum available at 5 GHz is very attractive to mobile carriers, prompting the industry to develop technology to combine LTE and Wi-Fi and use both licensed and unlicensed spectrum. The 3GPP has developed a standard for LTE-LAA, enabling LTE transmission in unlicensed bands, designating LTE band 46 for LAA (shown in Figure 1). 3GPP Release 13 defines an LTE-LAA supplementary downlink to increase downlink capacity, with theoretical peak speeds up to 1 Gbps. Enhanced LAA (eLAA), defined in 3GPP Release 14, adds transmission to increase uplink capacity (see Figure 2). 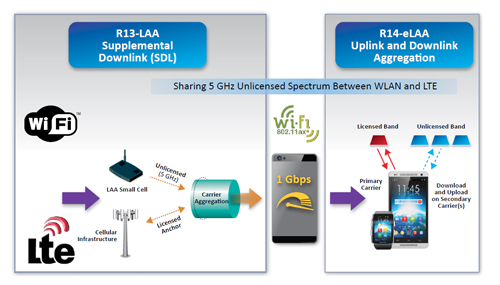 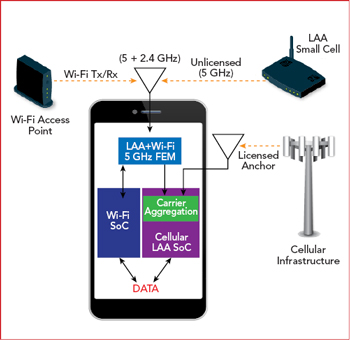 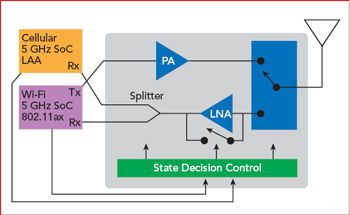 LAA is based on carrier aggregation to tie licensed and unlicensed bands together. An LTE carrier is the primary channel (anchor), and the unlicensed carrier in the 5 GHz band is the secondary channel, also using LTE waveforms. The 3GPP standard calls for fair sharing of the unlicensed spectrum - primarily by listening before talking - to ensure the Wi-Fi performance of nearby systems is not impacted. The 3GPP standards group and the Wi-Fi Alliance®are collaborating to ensure equitable use of the shared spectrum.

In a smartphone and cellular network with LAA capability, the Wi-Fi system on chip (SoC) and the cellular SoC will operate at the same time to increase download data rates (see Figure 3). In the phone, an LAA/Wi-Fi front-end module (FEM) will combine the functionality of a full 5 GHz Wi-Fi transmit/receive module and the 5 GHz cellular LAA receive function in a single solution (see Figure 4). Skyworks is developing LAA/Wi-Fi FEMs to support LAA capability in mobile phones, incorporating three elements to optimize LAA performance.

First, the receive chain includes a high performance low noise amplifier (LNA) with multiple low noise gain states and a high linearity bypass mode. This allows the system to choose the best gain for low level signals or the bypass mode, where noise figure is not a concern but linearity limits performance. This feature increases the input third-order intercept point (IIP3) from 6 dBm in the active state to 20 dBm in the bypass state.

Second, using a splitter after the LNA is a key differentiator, enabling the 5 GHz LAA and Wi-Fi signals to be simultaneously amplified and separately routed. In many mobile phones, the Wi-Fi and cellular radios are supplied by different manufacturers and work independently. Skyworks addresses this by integrating a splitter in the FEM, which enables the Wi-Fi and cellular signals to be routed to separate receivers, where each uses baseband frequency filtering to remove any unwanted signals. Typically, the Wi-Fi and cellular transmitters are in two different locations, which causes these signals to be at different power levels when received at the smartphone. The FEM adjusts their amplitudes to provide the optimal receive level to each transceiver. One challenge is the tradeoff between the low noise figure and high linearity states. Multiple LNA states combined with the splitter provide flexibility to make these tradeoffs.

The third section of the receive chain is the state decision control circuit. This digital block receives inputs from both the cellular SoC and the Wi-Fi SoC and synthesizes the many control signals for the FEM. 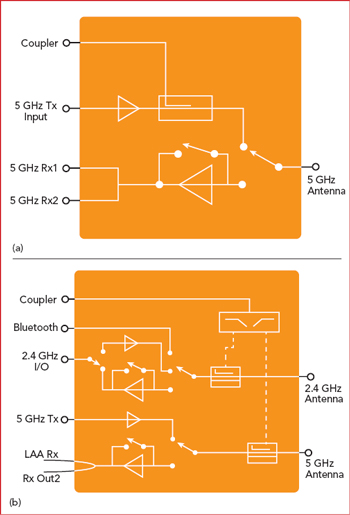 Another important function Skyworks designed into the LAA/Wi-Fi FEMs is rejection of all cellular bands below 3.8 GHz, particularly bands 40 through 43. This is important to maintain the noise figure and the signal-to-noise ratio for the desired receive signals, since LAA uses these lower cellular bands simultaneously with the 5 GHz receive channel. Unwanted signals injected into the LAA receive chain can saturate the LNA or create intermodulation distortion, degrading receiver sensitivity.

Skyworks is sampling two integrated LAA/Wi-Fi FEMs to leading handset manufacturers. The SKY85774-11 (see Figure 5a) is a 5 GHz FEM for concurrent Wi-Fi and LAA receive in a compact 2.2 mm × 3 mm footprint. The FEM also integrates a 5 GHz Wi-Fi transmit chain with a very low EVM PA for next-generation 802.11 requirements. The SKY85817-11 (see Figure 5b) is an LAA/Wi-Fi FEM with both 2.4 and 5 GHz Wi-Fi functionality, integrated in a compact 3 mm × 4 mm footprint. The 5 GHz receive chain has low noise figure, high IIP3 and low LNA supply current. The 2.4 and 5 GHz Wi-Fi PAs have very low EVM, for next-generation 802.11 requirements.

LAA is being deployed by AT&T and T-Mobile, with ongoing trials at multiple carriers, such as China Mobile, SK Telecom and Verizon. Skyworks’ integrated LAA/Wi-Fi FEMs will provide handset manufacturers with the functionality to adopt LAA, to increase data rates and improve user satisfaction.