We use cookies to provide you with a better experience. By continuing to browse the site you are agreeing to our use of cookies in accordance with our Privacy Policy.
Home » Breaking Through the Cost Barrier for Phased Arrays
Aerospace and Defense Channel

Breaking Through the Cost Barrier for Phased Arrays

For the U.S. military and contractor ecosystem that services it, intensifying security threats at home and abroad are being met, in part, with increased investments in phased array radar systems. Phased arrays promise enhanced threat detection and mitigation and faster, more agile communication across the modern battlefield. But, where legacy radar systems were afforded massive government funding and ample time for development and deployment, next-generation phased array radar technology does not have nearly the same luxury.

The growing proliferation of unmanned aircraft systems (UAS)-drones-spells a perilous new front in modern warfare and homeland security, whether they are state funded or off-the-shelf recreational varieties, particularly as swarming techniques come to the fore. To answer this threat, a more agile phased array radar platform is required, one that is easily and quickly manufacturable, deployable, field replaceable and adaptable to changing needs. Much like the drones, these radars must be nimble and affordable.

Drones are not the only threats driving this development effort, of course. Continued advancements in traditional warcraft and weaponry require a similar evolution toward more flexible and precise radar platforms. In all cases, the strong need to invest in scalable radar technology is counterbalanced by an equally strong need to reduce strain on the defense budget.

Figure 1 Tile-based planar phased array (a) vs. slate or brick configuration (b).

The end goals of these commercial and government initiatives are similar: they promote the use of affordable, scalable and highly integrated phased array antenna technologies to enable faster, more accurate and more sensitive transmit and receive (T/R) capabilities. This, in turn, allows wireless operators to increase subscriber coverage and affords civil radar with expanded fields of view to encompass aircraft, airborne objects and weather systems.

Although it might seem unlikely that commercial and government defense entities can reconcile their respective requirements for ultra-low-cost and battlefield ruggedness, the gap between them is, perhaps surprisingly, not that far apart. The prevailing next-generation phased array architecture targeted for 5G networks and civil ATC has achieved considerable cost reduction by using commercial-scale manufacturing processes and significant reductions in component count to improve ruggedness and reliability in harsh operating environments. This integrated and affordable
architecture-the tile-based planar array-is poised for mainstream adoption in commercial 5G and civil ATC applications alike and is already deployed in the field, with defense trials set to commence.

To better understand how tile-based planar phased array radars map to the specific end needs of defense applications, it is helpful to discuss the underlying architecture. The salient architectural goal of the planar array is to allow for a flat design where layers are oriented parallel to the face of the array (see Figure 1a)-not perpendicular as with legacy slat/brick-based configurations (see Figure 1b). The key reasons why the planar architecture is more cost-effective than the slat/brick architecture are because it is:

By moving to a planar configuration, the array can be built like a PCB, with surface-mount attachment of components to the back of the aperture board. The RF content -T/R modules comprised of highly integrated MMICs-is mounted to the back of the board, with an additional layer housing the DC voltage regulation and capacitor components (see Figure 2), which enables a single voltage to be fanned out within the system. This more elegant approach to channeling the RF, DC and control signals eliminates copious cabling and the associated cost, weight and layout complexities, while simultaneously providing a compact airflow design. 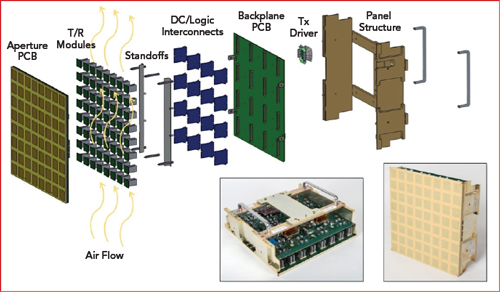 Further cost and weight reduction can be achieved within the planar array by eliminating the conventional super heterodyne (superhet) receiver in favor of a direct sampling, high speed data architecture, enabled by RF SOCs with integrated RF, analog and digital circuitry. RF SOCs preclude the need for cumbersome analog down-conversion. The capability to sample signals up to 56 GSPS enables direct RF sampling at very high frequencies, with the option to down-sample, which eliminates the need for a superhet receiver and discrete data converters tied to very specific frequency plans. This architecture also eliminates the exciter technology needed for superhet frequency conversion.

At the board level, this architecture yields a smaller system footprint, with digital flexibility and increased I/O across a very wide frequency range, streamlining the data pipeline and providing a scalable pathway for increasing the number of RF channels. Ultimately, RF SOCs eliminate a significant amount of legacy electronics and the associated power consumption from the array, playing a key role in enabling the software-defined coherent beamforming essential for efficient and precise radar tracking.

From the array architecture to the RF SOC layer, the higher integration achievable with tile-based planar arrays translates into significant reductions in component and connector count, reducing cost while simultaneously boosting system reliability and ruggedness. The ease of manufacturing with the “PCB-like” planar architecture ensures radar tiles can be produced quickly and cost-effectively, leveraging commercial, high volume best practices.

The viability and scalability of the planar array radar architecture is being demonstrated through initial deployments, successfully underway. The first planar array-based radar system deployed in conjunction with the MPAR program is in use today by the National Severe Storms Laboratory (NSSL) in Oklahoma (see Figure 3). It features a 10-tile planar architecture that is radiating and actively supporting NOAA weather tracking. A 76-tile array is being installed at the NSSL to support program software development, and another large-scale array is being tested at Hanscom Air Force Base. 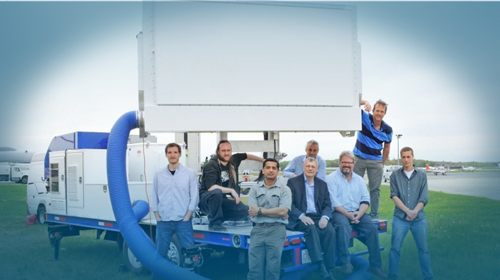 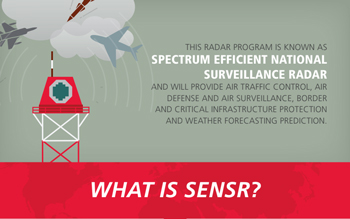 The MPAR program has now been integrated into the Spectrum Efficient National Surveillance Radar (SENSR) program, a U.S. government-sponsored, cross-agency planning and coordination initiative aimed at two goals: consolidating the national radar infrastructure into a single multifunction platform and freeing up valuable radio spectrum for reallocation to 5G services. The SENSR program brings together the FAA, DoD and the Department of Homeland Security (DHS) in a joint effort to radically streamline civil radar infrastructure (see Figure 4) and minimize the spectrum constraints on future 5G wireless roll-outs.

In addition to servicing traditional civil applications like airport terminal and weather surveillance, the SENSR program is addressing coastal and border surveillance, assessing airborne threats to homeland security-focusing on drones and missiles. Leveraging its earlier investment in the successful MPAR program, the government agencies spearheading SENSR may reasonably see planar arrays as a strong candidate for the underlying phased array radar platform.

In parallel, tile-based radar technology is set for use by SRC, a not-for-profit research and development company, to underpin its advanced SkyChaser multi-mission radar system, which is being optimized for military applications. The SkyChaser radar is designed to detect and track close-in and long-range targets while on the move in vehicle-mounted configurations, if desired. This impressive capability distinguishes SkyChaser as an extremely versatile means of conducting air surveillance, counter-fire target acquisition, short-range air defense and drone sensing and avoidance.

The higher levels of integration, affordability and manufacturing efficiency inherent to the planar array radar architecture, from the system to the component, positions it uniquely to help address the evolving military and homeland defense needs. Early deployments have demonstrated scalability and flexibility, and parallel advancements in commercial 5G infrastructure will drive the cost structures needed to adopt planar phased array radar for mass deployment for civil radar and the modern battlefield.