We use cookies to provide you with a better experience. By continuing to browse the site you are agreeing to our use of cookies in accordance with our Privacy Policy.
×
Home » Overcoming the Challenges of mmWave, On-Wafer Load-Pull Measurements for 5G
4G/5G/Cellular Test and Measurement Channel

Hybrid-active load-pull overcomes the challenges in mmWave power amplifier design by removing the uncertainty of unclosed contours to enable designing for peak performance.

Fifth-generation mobile represents the next evolution in wireless communications. With an emphasis on connectivity, 5G is expected to bring together data, voice, video, IoT, connected cars, smart homes, smart cities, augmented reality and industrial automation. 5G will achieve this aggressive goal by deploying technologies over multiple frequency bands, from low MHz to high GHz. Research in the 450 MHz to 6 GHz bands is targeting long-range communication and in the 28 to 30 and 37 to 39 GHz bands for high data rates. While posing unique challenges, the mmWave bands promise to bring many advantages, including larger bandwidth, greater capacity, increased security and longer battery life. 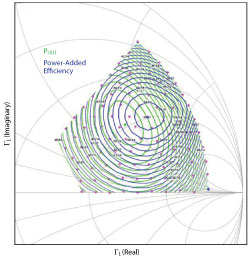 A critical enabler in the 5G infrastructure is the power amplifier (PA), which must be properly designed for optimum performance, i.e., maximizing power and efficiency while maintaining appropriate linearity. A useful design tool for maximizing performance is load-pull.

Load-pull is the process of changing the load impedance presented to a device under test (DUT), commonly a transistor, to measure its performance characteristics under varying large-signal conditions. The impedance is systematically changed while parameters such as output power, gain and efficiency are measured or calculated. Contours representing fixed performance values (e.g., x dBm output power or y percent efficiency) are then plotted to visualize the point of maximum performance, the rate at which the performance changes and trade-offs between various parameters (see Figure 1).

Load-pull changes the magnitude and phase of ΓL by changing the reflected signal a2. Any load impedance, which can be calculated as

can be achieved. It is important to note that ΓL is less than 1, since a2 is always smaller than b2 due to losses between the output of the DUT and the tuner.

Open-loop active load-pull (see Figure 4) does not rely on a mechanical tuner to reflect part of b2 back as a2; rather, it uses a signal generator with magnitude and phase control to create a new signal a2. When amplified by an external amplifier, any a2 and, hence, any ΓL can be achieved. At first glance, active load-pull may seem superior to passive load-pull since it has no theoretical ΓL limitation; however, a practical limitation is the power required to achieve the signal a2 actually delivered to the output of the DUT. Active tuning has several advantages over passive tuning, including speed, as there are no mechanical moving parts, and increased Smith chart coverage, as a2 is directly generated, enabling

to be greater than 1.