We use cookies to provide you with a better experience. By continuing to browse the site you are agreeing to our use of cookies in accordance with our Privacy Policy.
×
Stay Connected :
Home » Planar Four-Way Power Divider with Stopband Rejection and Good Output Isolation 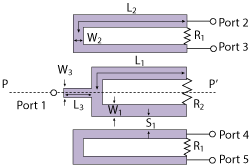 In this article, we describe a compact, planar, four-way power divider with stopband rejection, good isolation and impedance matching at its output ports. The power divider is constructed using coupled lines. Its frequency response is similar to a coupled line filter. Coupled lines are utilized instead of the quarter-wavelength line in a conventional Wilkinson power divider to reduce the size. Measured results show that this planar four-way power divider with stopband rejection has several advantages: excellent input impedance matching, low insertion loss, a good balance of amplitude and phase at the output ports, good filter response and good isolation within the passband.

The operating bandwidth is determined by the coupling gap, S1, between the transmission lines, which can be obtained by simulation. Isolation resistors (R1 in Figure 1) are located between ports 2 and 3 and ports 4 and 5. Another isolation resistor, R2, is located between the two central coupled lines. Since the power divider is symmetric, the even/odd mode method can be used for analysis.

Under odd mode excitation, the symmetrical plane PP’ shown in Figure 1 is an electrical wall (see Figure 2). Part 1 in Figure 2 is a coupled line, which can be viewed as a four-port network. One of the four ports is a short circuit and another connects to the resistance R2. According to microwave network theory, part 1 can also be viewed as a two-port network. The two ports are designated 1 and 2, respectively. The impedance matrix elements of the two-port network are obtained as follows:

where θ is the electrical length of part 3. The transmission matrix [A3] of part 3 is obtained by combining Equations 1 and 2.

When port 1 and port 2 are simultaneously matched, the following condition must be satisfied:

where Aw1, Bw1, Cw1 and Dw1 are the elements of the transmission matrix [Aw1].

Under even mode excitation, the symmetrical plane PP’ is a magnetic wall, as shown in Figure 3. The analysis method is similar to the odd mode. According to transmission line theory, the input impedance Zin1 is determined by

Based on microwave network theory, the impedance matrix [Z2] of part 5 is 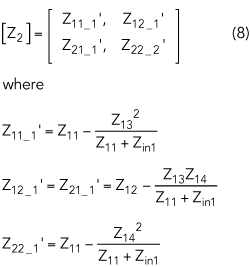 The transmission matrix [Aw2] of the entire network is determined in a manner similar to that for the odd mode analysis. When ports 3 and 4 are simultaneously matched, the condition that must be satisfied is

where Aw2, Bw2, Cw2 and Dw2 are the elements of [Aw2]. The isolation resistances R1 and R2 can be calculated by combining Equations 1 to 9 after the other parameters are confirmed.

The measured insertion phase of port 2 is similar with that of ports 3, 4 and 5 (see Figure 6a) with a maximum phase imbalance of ±2 degrees from 0.5 to 1.4 GHz. Amplitude and phase imbalance is likely due to fabrication and assembly tolerances. Figure 6b shows the isolation between output ports, which is greater than 15 dB over the passband.

A compact planar four-way wideband power divider with stopband rejection uses coupled line technology not only provides a four-way power dividing function but also a bandpass response. Even and odd mode equivalent circuits are presented and design equations are derived. Measurement is in good agreement with simulation, verifying the theoretical analysis. This structure has excellent input and output impedance matching, low insertion loss, good balance of amplitude and phase at the four output ports, a filter response and good isolation within the passband.n

The work for this grant was supported by National Natural Science of China (Grant No: 61271026) and by the Program for New Century Excellent Talents in University (Grant No: NCET-11-0066).

Kaijun Song received his master’s degree in radio physics and his Ph.D. degree in electromagnetic field and microwave technology from the University of Electronic Science and Technology of China (UESTC), Chengdu in 2005 and 2007, respectively. Since 2007, he has been with the EHF Key Laboratory of Science, School of Electronic Engineering, UESTC, where he is currently a full professor. His current research fields include microwave and mmWave/THz power-combining technology; UWB circuits and technologies; microwave/mmWave devices, circuits and systems; and microwave remote sensing technologies.

Yu Zhu received his bachelor’s degree in electrical information engineering from Southeast University Chengxian College in 2014, and is currently pursuing his master’s in electrical engineering at UESTC. His research interests are in the areas RF/microwave and mmWave devices.

Shunyong Hu received his bachelor’s degree in applied physics from Shandong University of Science and Technology, Qingdao, Shandong in 2010 and is currently working toward his Ph.D. degree in electromagnetic fields and microwave technology at UESTC. His research interests include microwave and mmWave power-combining technology and microwave passive component design.

Fan Zhang received his bachelor’s degree from the Hefei University of Technology, Hefei in 2012. He is currently working toward his Ph.D. in the School of Electronic Engineering, UESTC. His research interests are microwave/mmWave passive structures, including filters and power dividers/combiners. He is also involved in the investigation of quasi-optical, beam-shaping techniques, diffractive optics and reflector design.

Maoyu Fan received her bachelor’s degree in physics from UESTC in 2014 and is currently working toward her master’s degree at UESTC as well. Her current research interests include electromagnetic, metamaterials and microwave/mmWave devices, circuits and systems.

Yong Fan received his bachelor’s degree from Nanjing University of Science and Technology, Nanjing, Jiangsu in 1985 and his master’s degree from UESTC in 1992. He is a senior member of the Chinese Institute of Electronics. His research interests include mmWave communication, electromagnetic theory, mmWave technology and mmWave systems.