We use cookies to provide you with a better experience. By continuing to browse the site you are agreeing to our use of cookies in accordance with our Privacy Policy.
Home » Push-On RF Probe for SMA Connectors

Spring-loaded coaxial probes to test SMA (and other RF) connectors are not that new. For several years, they have met the demand for having a test solution that can be used beyond the mating cycles of a regular RF connector and can be utilized inside a test fixture for semi or fully automated testing.

These probes must be used in such a test fixture because there is no locking feature for hand probing. More and more companies with RF applications, however, need to manually test large arrays of RF connectors. The SMA series is one of the most widely used miniature connectors worldwide. One solution to test these connectors is to use the mating connector. This usually yields the best RF performance. However, that is not only time consuming (each SMA needs to be tightened with the proper torque) but also limits the lifetime of the test connector drastically, as SMA connectors are usually limited to 500 to 1,000 mating cycles, depending on the base material and other material properties.

Figure 1 The probe mated with the SMA connector.

To address this issue, INGUN decided to develop a product that combines the advantages of a spring-loaded test probe—long lifetime, versatility and robustness—with the qualities of a mating connector—best return and insertion loss performance. The design engineers added a spring-loaded locking feature that makes the probe usable by hand without the need for a test fixture. The result is the HFS-ADA-QSMA-M-SMA-F Push-On RF Probe for SMA connectors with locking mechanism that can withstand more than 100,000 mating cycles.

The HFS-ADA-QSMA-M-SMA-F features three spring-loaded pins with serrated heads, for the best contact on various quality SMA connectors, that mate with the outer conductor upon compression of the part. This yields to a slight impedance discontinuity, due to the air gap; however, the losses are negligible up to 12 GHz, and the probe keeps a return loss of 20 dB or better (VSWR ≤ 1.22) for most of that range, up to approximately 11 GHz. A touchdown on the inner ring of the female SMA would increase the return loss but, at the same time, decrease mechanical mateability.

The center conductor has a cone shape and mates with the slotted center conductor of the SMA connector. The cone shape allows for a firm, concentric contact on all sides, yet is soft enough to withstand a high number of disengagement cycles. Three small beads are used as a retention feature and hold the SMA connector. On insertion of the SMA, a leaf-spring acts as the counterforce and presses against the beads. Figure 1 shows the probe mated with the SMA connector. The force which is applied to the beads is surprisingly low: 0.5 N per bead. However, even the low force locks the probe securely, with no risk of damaging the outer threads. Figure 2 shows the mechanical dimensions of the HFS-ADA-QSMA-M-SMA-F push-on RF probe.

INGUN carried out extensive testing of the new product. Up to 11 GHz, the probe shows a return loss value of 20 dB or better, while the insertion loss is around 0.3 dB at that frequency. Figure 3 shows the contacting sequence, while Figure 4 and Figure 5 show the return and insertion losses, respectively. 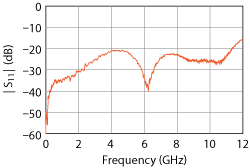 As a result of development and testing, the company has produced a versatile contacting solution for push-on connection of female SMA connectors. The design allows the operator to quickly attach and test rack systems or individual RF modules. Significantly too, the concept of the probe has the facility to accommodate different connector applications. For instance, similar designs could help to quickly connect to and disconnect from type N or other connectors, even bulkier types such as 7/16 connectors. However, it is critical to note that the probe should not be used for metrology grade testing or for applications where phase stability is of utmost importance. The main arena for the HFS-ADA-QSMA-M-SMA-F probe is for power level and similar test applications for test laboratories, production line testing or troubleshooting.