We use cookies to provide you with a better experience. By continuing to browse the site you are agreeing to our use of cookies in accordance with our Privacy Policy.
Home » Tektronix introduces new Signal Creation and AWG Control Software Platform
Industry News Software/EDA Channel 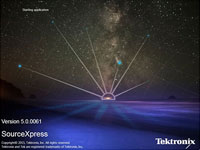 The ability to create, generate, or replicate ideal, distorted, or “real-life” signals is essential in design, testing and operations of complex components, systems and experiments. The Tektronix AWG70000 Series of arbitrary waveform generators use direct synthesis to create a virtually unlimited number of analog or digital signals with up to 50 GS/s and 10-bit vertical resolution.

A key challenge to date, however, has been keeping pace with the rapid change in the electronics industry and the wide variety of applications for signal sources. With its plug-in architecture, the SourceXpress simplifies development of new waveform creation modules for faster time to market as new applications emerge. Over time Tektronix plans to roll out an extensive library of modules to compliment the Generic Pre-Compensation and Multitone & Chirp plug-ins introduced today alongside SourceXpress.

“The SourceXpress application takes signal source instrument control and waveform generation to the next level, unlocking the full potential of our AWGs,” said Jim McGillivary, general manager RF and Component Solutions, Tektronix. “Rather than having large software platforms for different applications, we are developing smaller waveform creation plug-ins that integrate into the AWG70000 user interface or on a PC using SourceXpress. This means customers can select only the modules they need for a particular application without the overhead and expense of features they don’t need.”

The hallmark of RF and signal generation applications is the ability to produce clean chirps, tones and notches. The Multitone & Chirp plug-in for SourceXpress is ideal for a wide variety of military, aerospace, and RF applications. This plug-in can be used to create noise power ratio (NPR) tones with a set of desired start and end frequencies and spacing. Frequencies can be notched out by setting the start and end frequency of choice. When generating chirps, the user can decide between “high to low” or “low to high” frequency sweeps and define chirp characteristics by sweep time or by sweep rate.