We use cookies to provide you with a better experience. By continuing to browse the site you are agreeing to our use of cookies in accordance with our Privacy Policy.
×
Home » Raytheon receives $543M for SM-3 Block IIA production and delivery
Aerospace and Defense Channel Industry News 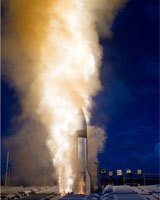 SM-3 Block IIA is a cooperatively developed joint program with the MDA and Japan Ministry of Defense. The SM-3 Block IIA interceptor will dramatically expand the range and capability from the current SM-3 Block IA and IB interceptors enabling more mission flexibility on both Japanese and U.S. Aegis ships.

This new variant of the SM-3 features larger rocket motors and a more capable kill vehicle, which will provide faster speeds and greater range, protecting larger regions of land. Its versatility permits use at sea or on land, with no modification to the missile – a trait unique to the SM-3 family of ballistic missile defense interceptors.

"SM-3 Block IIA plays a pivotal role in Phase 3 of the European Phased Adaptive Approach through its proven technology and adaptability to an evolving security environment," said Dr. Mitch Stevison, Raytheon Air & Missile Defense vice president. "SM-3 Block IIA remains on schedule for both land and sea deployment in 2018, enabling a greater degree of protection than ever before for our U.S. deployed forces and NATO allies."

Production under this contract will be completed at Raytheon facilities in Tucson, Ariz., Huntsville, Ala., Andover, Mass., and Goleta, Calif.

About Standard Missile-3
SM-3s destroy incoming ballistic missile threats in space using nothing more than sheer impact, which is equivalent to a 10-ton truck traveling at 600 mph.