We use cookies to provide you with a better experience. By continuing to browse the site you are agreeing to our use of cookies in accordance with our Privacy Policy.
×
Stay Connected :
Home » Blighter B400 Series PESA radar selected for international airports in Paraguay
European Industry News Industry News 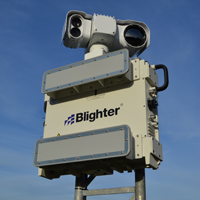 The Blighter solution consists of the Blighter B400 radar fitted with 20º antennas, BlighterTrack software and the BlighterView HMI control system. It is fully integrated with cameras from Liteye Systems providing the capability to slew-to-cue the pan, tilt, zoom (PTZ) thermal imaging surveillance systems and to automatically initialise the CCTV recording system.

Jorge Alfonso Ramírez, vice president, Omni S.A., said, “We needed a robust, reliable and maintenance free solution that could provide 24-hour surveillance across the airfield and airport perimeter in all weather and light conditions. Blighter exceeded our expectations and outperformed the other suppliers’ systems. The benefits of the Blighter PESA e-scan radars are clear – superior performance, ease of installation onto existing infrastructure, intuitive operation, seamless integration with cameras – as well as lower installation costs, lower through life costs and lower false alarm rates.”

Using Blighter’s PESA technology, man detection ranges out to 3, 5 or 6.5 miles (5, 8 or 11 km) and ultra-wide elevation beams (up to 20º) can be achieved. This allows the radars to stand-off from the area to be monitored, for example mounted on top of existing airport buildings, giving clear line-of-sight to the airport perimeter, while still maintaining the full integrity of the radar coverage zone. Being able to mount the sensors on the existing airport buildings, allows for ease of connection to readily available sources of power and network connectivity.

Mark Radford, CEO of Blighter Surveillance Systems, said: “We are delighted to have secured this contract for the two main airports in Paraguay, our first sale in South America. The significant benefits of the Blighter radar are now being recognised by busy international airports such as London Heathrow and others in the United States, Europe and Africa. We plan to build on this success in this region by targeting other airports and infrastructure sites – oil and gas facilities, mines and air bases that would clearly benefit from our advanced protection technology.”